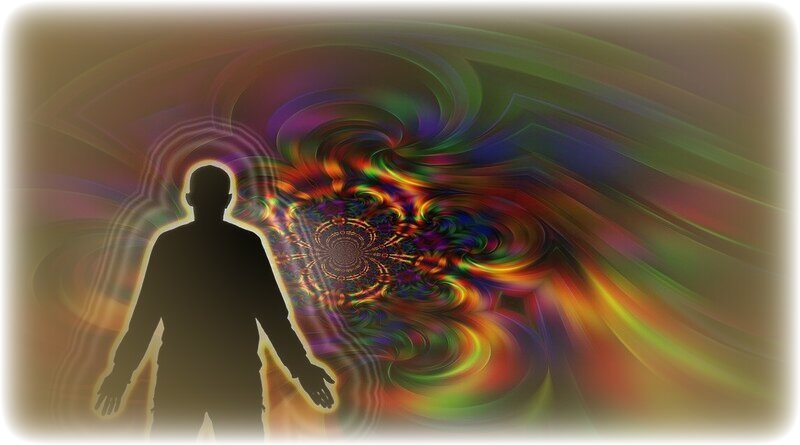 An aura is an energy field or life force that supposedly surrounds every living thing and natural object, including rocks. People who believe in auras say that in living things this energy field changes in accordance with its health, and in human beings, it changes in accordance with emotions, feelings, and thoughts as well. In addition, each human being is said to have a unique aura; when two auras come into contact when two people meet, the auras affect one another, with one taking some energy from the other and vice versa. This phenomenon, believers say, is why one person sometimes feels “drained” or tired after talking to another.

Some people claim to be able to see auras, usually while in a relaxed or meditative state. They report that an aura is a coloured outline or series of outlines, a coloured band or series of coloured bands of varying widths, or a halo of one or more colours, beginning at the surface of an object or being and emanating outward. Believers in auras also sometimes say that each aura has seven layers, with the layer at the skin much denser than each successive layer outward, and that each layer can be associated with one of seven energy portals that connect the mind to certain parts of the body. These portals, known as chakras, are the reason, believers say, that the colour, intensity, and/or outline of an aura can indicate the health of various body parts.

Believers disagree on how various health problems correspond to the colours of an aura, but they generally contend that a vibrant aura with a distinct outline means that a person is healthy, whereas a weak, blurry aura that does not completely surround the subject is a sign of either mental or physical illness. Some believers, for example, say red is a warning colour, suggesting that some part of the body is developing a serious health problem, and that red indicates pain and/or swelling as well as anger and aggression. Green, on the other hand, is the colour of calm emotions and can indicate that a person’s body is healing or healthy. Some believers say that orange auras also indicate health, but others say that this depends on the shade of orange, because brownish orange auras are a sign of a severe illness or emotional imbalance. Most believers agree, however, that indigo indicates a person with psychic abilities and that black auras usually indicate that a person has a terminal illness and/or is so severely depressed that he or she is suicidal.

Among those who believe that auras can be indicative of a person’s health is parapsychologist Thelma Moss, who argues that the phenomenon can be used to diagnose specific illnesses. While working at the University of California, Los Angeles, Neuropsychiatric Institute, she wrote the first books to seriously examine the medical aspects of auras, The Body Electric (1979) and The Probability of the Impossible (1983). In these works, Moss advocates that Kirlian photography be used as a medical diagnostic tool. With Kirlian photography, any object, whatever it is made of, is placed against a photographic plate and subjected to a high-voltage electric field or current; the result is a photographic image of the object, surrounded by one or more radiant outlines of varying colours and widths. Supporters of Kirlian photography as a diagnostic tool say that these glowing coronas of light are auras, but sceptics say that they are a byproduct of the photographic process itself; in other words, the electrical charge, rather than the object being photographed, is somehow producing the visual effect.

Sceptics similarly dismiss claims by people who say they can see auras with the naked eye. Sceptics say these individuals are suffering from a neurological or vision disorder that produces the coloured rings or bands. Indeed, physicians know that such disorders can create such false images. Still, there is no sign that the individuals who claim to see auras suffer from a physical or mental illness.