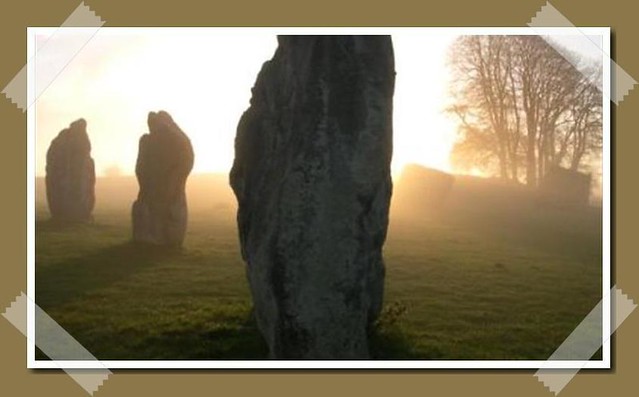 Avebury The most important and oldest megalithic henge in Britain, predating the Druids with active use between 2600-1600 b.C.e. Avebury is said to be the largest henge in the world, covering 28.5 acres and including most of the village of Avebury, located six miles west of Marlborough in Wiltshire, southern England. The site may have served Neolithic Goddess worship and is con- sidered a center of Earth and psychic power by WiccaNS, PAGANS and others. The original purpose of the stones is shrouded in mystery.

The henge is surrounded on three sides by the Marlborough chalk downs and consists of a 15- foot-high bank, 1,200 feet in diameter, encircling an out- er ditch. The bank is intersected by four roads, three of which, and possibly the fourth, are thought to have been causeways to provide access to and from the henge. From the air, Avebury looks like a Celtic, or circled, cross.

Within the large outer circle stand the ruins of two and perhaps three smaller circles. The outer Great Stone Circle once contained about 100 upright sarsen stones which are hard, sandstone rocks found in the downs. Only 27 remain, due to massive destruction by the Puritans in the 17th and 18th centuries. The largest of these weigh about 60 tons and stand around 25 feet tall.

The circle to the north is known as the Central Circle and was composed of about 30 stones, four of which still stand. In the center were three stones forming a ring called a Cove or Devil's Den; only two of the stones sur- vive. The Cove may have been used for funeral rites for bodies that were buried elsewhere.

Standing alone between the main circle and the South Circle at the other end is a stone with a natural hole. It is now referred to as Stukeley's Ring Stone for William Stukeley, the 18th-century antiquarian-archaeologist whose investigations provided much of what is known about the site before modern developments.

The South Circle has two large stones still upright at its entrance. Originally there were about 32 stones, five of which remain, and there are markings where others once stood. Some theorists believe that this inner circle was the site of fertility ceremonies during which human bones were used.

A large stone, called the Obelisk, stands in the center with smaller stones, called Z stones, surrounding it. The Obelisk may have been the site for an ancestor cult, for human bones were found at its base. At this end are also some tall standing stones and smaller stones in triangle or diamond shapes, perhaps depicting the male and fe- male forms.

A double row of stones forms West Kennet Avenue and leads toward the Kennet valley from the South Cir- cle. Originally, the avenue comprised about 200 standing stones set in pairs and was the link between the Great Stone Circle and another small circle known as the Sanctuary, one mile away on Overton Hill. One researcher, Alexander Keiller, excavated the site in 1934 and found burials at the bases of four of the large stones. Keiller also learned that the avenue was crossed by early Iron Age and Roman field boundaries.

The Sanctuary might have been built on the site where wooden rings stood and where corpses were stored until the flesh decayed. The dead may have been carried along the avenue to this circle. The Sanctuary also was part of Stukeley's theory that the Druids were serpent worshipers and Avebury, like Stonehenge, was a serpent temple of 'Dracontia.' The Sanctuary was the head of a snake, the West Kennet Avenue stone paths formed the neck, and the sarsen circles were the coils of the body.

At the western entrance of the henge once stood Beck- hampton Avenue. It was destroyed by the Puritans and now only two stones, known as Adam and Eve or the Long- stones, stand. No one knows where the avenue ended, but it is thought to have extended a mile and a half. Stukeley claims that it stretched from the two stones to the sarsen circles. Sir Norman Lockyer, a 20th-century astronomer, asserted that the Beckhampton Avenue and Cove features were orientated to the May sunrise and May ceremonials, and the West Kennet Avenue was once used to observe the morning rise of Alpha Centauri in November.

Silbury Hill is built on a natural chalk ridge covering about five acres and rising 130 feet in height. It is the larg- est man-made mound in Europe, and while its purpose and relationship to Avebury have not been determined, the carbon date for its first phase of use is c. 2600 b.C.e. and suggests it was built about the time of the first con- struction stages of Avebury. However, West Kennet Long Barrow, a mound about 350 feet long with a long passage and five burial chambers, was built c. 2700 b.C.e.

Windmill Hill, 1.5 miles northwest of Avebury, has an earthwork on the top that was built around 2500 b.C.e. Animal bones uncovered here suggest it may have been a cattle market, trading post and ritual site.

The antiquarian John Aubrey visited Avebury in 1648 and observed that the stones were either standing in their original places or had fallen nearby. Shortly after, the Puritans began destroying sarsens by breaking them with hammers or by burning them. In 1649, stones were removed to clear the land for farming. Local inhabitants used them in their own buildings; fragments can still be seen in the village manor house, church and homes. Aubrey's notes provide modern investigators with their only clues for defining the stones' original positions.

Purpose and uses of the stones.

Excavations at Avebury and monuments in the surrounding area have failed to Awen 1 5 determine a definite origin, purpose or interrelationship among the stones. According to various theories, the en- tire site may have comprised a single religious, magical or psychic center, or one specific set of stones may have served as sites for fertility, religious or burial rites or for astronomical purposes.

The most widely accepted theory holds that Avebury was built by prehistoric Beaker folk, so named for their beaker pottery, over a period of five centuries. Beaker pottery has been found in the area, and timber buildings were uncovered at the site, suggesting that Avebury might have once been a settlement of huts. The name Avebury, however, implies that at some time in its history, it was a burial site and was referred to as such in the 10th-century charter of King Athelstan.

One scenario holds that Avebury was built for seasonal festivals, and the stones were arranged for processionals. Some observers see male and female aspects to the pillars and diamond shapes of the stones. Silbury Hill may be an image of the pregnant Goddess, another fertility sym- bol. Still another symbol is the Devil's Chair, a huge stone that measures 14 feet wide by 13 feet high and contains a ledge. In folk tradition, Avebury village girls would sit on Devil's Chair on Beltane (May Eve) to make wishes.

The stones of Avebury are widely believed to be the collectors and repositories of Earth and psychic energy, which supposedly was known to the original users of the site and which can be dowsed. The area around Avebury has been popular with the makers of crop circles. See also MEGALITHS.

Stonehenge Located about 80 miles (129km) west of London, England, on the Salisbury Plain near the town of Wiltshire, Stonehenge is an ancient monument that…

Arbor or Arbour Low on Middleton Moor, west of Youlgreave, is a double-entrance henge monument dating from c.2000–1600 BC. Standing high above sea level and…

Devil’s arrows are stones flung by the Devil in attempts to destroy towns and churches. According to lore, the Devil usually has bad marksmanship, and…