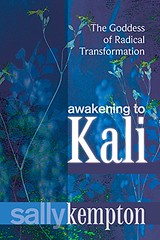 The sages of Tantra taught that when we follow the path of Shakti, the sacred feminine principle personified by the goddesses of yoga, we awaken the full potential of our own inner energies. Kali, teaches Sally Kempton, may be both the most powerful—and misunderstood—goddess of all.

Kali—her name means “Black One”—is the original Dark Goddess, whose hidden gift is ecstasy. She brings both fierceness and love, destruction and rebirth—and untamed courage and freedom for those willing to fully comprehend and embrace her many gifts. In this e-book, readers are invited to explore teachings, stories, meditations, prayers, poems, mantras, invocations, and rituals to align with this cosmic force of radical transformation.

Encountering Kali explores one of the most remarkable divinities the world has seen―the Hindu goddess Kali. She is simultaneously understood as a blood-thirsty warrior, a…

How do you live a life of spiritual awakening as well as outer abundance, inner freedom as well as deep intimacy? How do you serve…

Sara La Kali : The Black Queen Every May, the mysterious Sara La Kali is the subject of the largest annual Romani (Gypsy) pilgrimage. She…

Kali is India’s Great Mother: goddess of time; creation; destruction and contradictions. Kali was a tribal goddess prior to the Aryan invasions, which brought Vedic…

Chandi – Queen of Dust Chandi, goddess of birth and death, is a tribal and village goddess partially incorporated into the Hindu pantheon. She is…