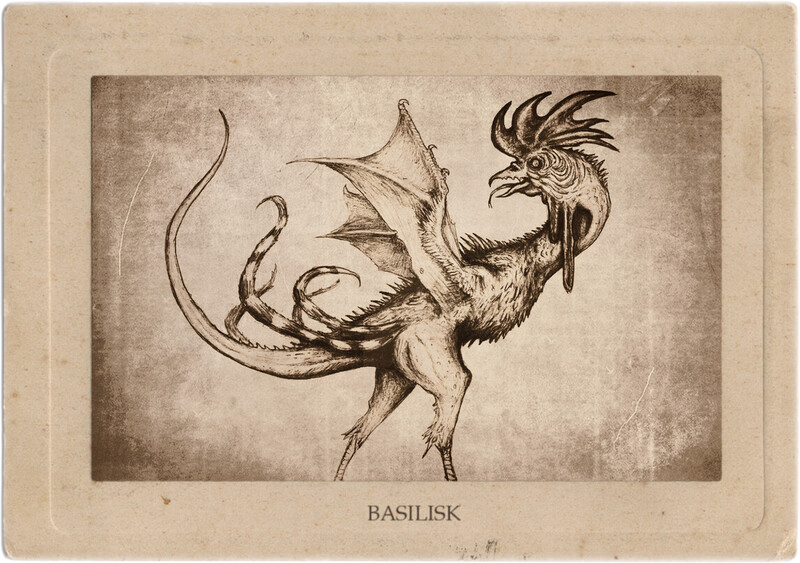 A basilisk is a mythological creature with a fowl’s head and serpentine body, important as a Symbol in Alchemy and in Magic. There are three types of basilisks:

• The first and most deadly is hatched from a hen’s egg by a serpent ; it has the head of a cock with a toad mouth and the body of a dragon with chicken feet, as well as Gorgon eyes that can kill with a glance. This basilisk is about the size of a chicken, has no wings, and has short feathers on its head, neck, and back. The only way to kill it is to make it stare at its own reflection in a mirror preferably made of steel.

• The second type of basilisk is made magically with herbs and is venomous.

• The third type is harmless and exists in mines. It has the head and feet of a chicken, a serpent’s tail, and beautiful eyes. It is coal black and has shining wings, upon which can be seen veins. Its oil and water are valuable to alchemists, who sometimes find gems inside its head.

The basilisk is a symbol of wisdom and is often shown devouring a human. To the ancients, to be devoured by wisdom means enlightenment, gnosis, and initiation into the mysteries. The basilisk also is related to the all-powerful Gnostic god Abraxas, ruler of magic and spiritual powers in the universe, who is portrayed in art as having the head of a cock or lion and the body of a man with legs that end in serpents or scorpions.

Christianity Demonized the basilisk as a symbol of the devil.

A caduceus is a wand entwined by two snakes and topped by wings or a winged helmet. The caduceus is associated with Magic, spiritual enlightenment,…

Lindorm is a Swedish word for dragon, a creature which even in nineteenth-century Scandinavia was no mythological beast. It was something people could encounter in…

Abraxas (Abrasax, Abraxis) is the gnostic name for the demigod who rules the 365th (highest and ﬁnal) aeon, or sphere, ascending to the unknowable God.…

From: https://www.museumofhoaxes.com/serpent.html On August 10, 1817 a strange creature was sighted in the harbor of Gloucester, Massachusetts. Reports of it began to spread throughout New…

serpent Ancient symbol of wisdom and fertility, but in Christianity turned into a symbol of evil, the Devil, and Satan. The serpent is a favourite…