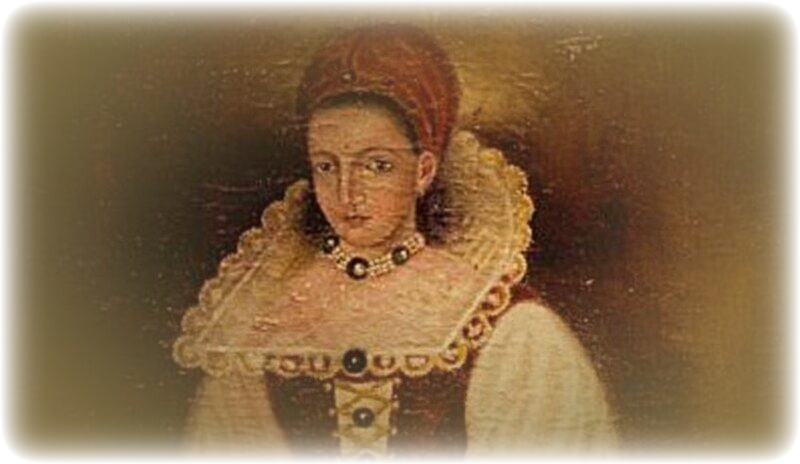 Elizabeth Bathóry (1560–1614) Blood-bathing noblewoman, called “the Blood Countess.” It is not known if Elizabeth Bathóry actually drank blood, but she was obsessed with bathing in it. Her obsession might be considered a form of vampirism, especially considering the lives that were sacriﬁced for her habit.

Bathóry was born in 1560 in Ecsed, TRANSYLVANIA, to a noble family who dominated the region in the southeast of Hungary, in what is now Romania. She was a great beauty, but was an ill-tempered child. At age 14 she became pregnant by a peasant man and was sequestered until she gave birth.

In 1575, at age 15, she was married to Count Ferencz Nadasdy, a wealthy man who was many years her senior. She went to live at Castle Savar, the count’s family estate. She was an accomplished hostess, but also sadistic to servants and peasants.

The Magyar nobles had virtual free reign to do whatever they pleased, and the slightest whims and grossest of perversions had to be obeyed. Bathóry seemed to enjoy tormenting pretty girls. A cousin of her husband’s was accused of stealing fruit, and in punishment Bathóry had her tied naked to a tree and smeared with honey to attract insects.

Her husband also taught her to discipline servant girls by putting oiled paper between their toes and setting the paper afire. The girls’ wild attempts to get rid of the paper was called “star-kicking,” to the amusement of the nobles.

By age 25 Bathóry was terriﬁed of losing her beauty, a fear that grew worse with each passing year. After her husband’s sudden death—possibly of appendicitis—in 1604, she began to lead a twisted double life. She had already dabbled in sorcery, attending secret sacrifices of white horses and encouraging the company of a sorceress named Anna Darvulia who brought out her worst.

According to lore, Bathóry was introduced to the benefits of blood by accident. To punish a clumsy maid, she took a pair of scissors and struck the girl in the face, cutting her and causing blood to splash upon Bathóry’s hand. Bathóry seemed to think the blood restored the youthful appearance of her skin (she was perhaps by now in middle age past menopause).

Her sorceress concurred with her that bathing in virgin’s blood would indeed help her to regain and retain her youth. Bathóry began bathing in blood as often as possible, performing it as a ritual at four in the morning, a mysterious time speciﬁed by Darvulia.

Serving girls were fattened up, tortured, bled, and killed. The victims were procured by two old women and an individual named Fitzko, who were Bathóry’s accomplices. Bathóry had the girls tied up tightly so that their blood would spray out when they were cut with scissors or pricked with pins. She also had hot pokers stuck into their mouths, and when she was done bleeding them, she had them beaten to death with a whip.

Bathóry also visited other abominations upon the hapless girls, such as ironing their feet with a hot iron, pouring cold water on them as they stood naked in the snow, and forcing them to eat the cooked ﬂesh of other serving girls killed.

One of Bathóry’s favourite activities was to sit beneath a cage full of servant girls that was hoisted up off the ﬂoor. The cage was lined with sharp spikes, and the girls were prodded into the spikes with burning irons. This way, Bathóry had her own blood shower. She reportedly forced her servant girls to lick the blood off her back. And so the atrocities went.

Young girls were lured to her with offers of ﬁne jobs. Once inside, they were imprisoned, never to see the outside again. By 1609 Darvulia was dead and Bathóry was convinced that the blood baths were no longer holding back the march of time. She consulted another sorceress, and was told that her victims should be virgins of nobility.

Securing these victims was more difﬁcult, but Bathóry used the ruse of offering them jobs as maids of honor. Still, there weren’t enough noble young ladies to ﬁll the blood bowls, and Bathóry’s accomplices were forced to dress up peasant girls in ﬁne clothing to pass them off as nobility.

Rumors about Bathóry, which had been circulating, finally could no longer be ignored. Perhaps it was of no official concern if only peasant girls were meeting their deaths, but the murders of gentry was another matter. One of Bathóry’s cousins, Lord Palatine, Count George Thurzo, inspected her castle at Csejthe on December 30, 1610, accompanied by soldiers, the governor of the province, the village priest, and local gendarmes.

The count was horrified to find the bodies of tortured girls, and living girls who’d been “milked” and were penned up like animals. The Lord Palatine immediately arrested Bathóry’s accomplice servants, including her maid, Zsuzanna, and everyone else in the castle. Exhumations revealed the remains of more than 50 bodies.

Bathóry’s journals reportedly listed the names of more than 600 victims. The accomplices were tried and convicted. One was beheaded and burnt, and two had their ﬁngers torn off one by one with hot pincers, and then were burned alive.

Bathóry was not arrested or tried, probably because of her nobility. Nonetheless, she was punished. Her cousin believed her to be insane, and had her walled up in her bedroom in her castle at Csejthe. Slits let in air, but very little light. Food was sent in through a slot. There she lived in isolation and misery until August 21, 1614, when she died suddenly.

Encyclopedia of Vampires, Werewolves, and Other Monsters – Written by Rosemary Ellen Guiley-Copyright © 2005 by Visionary Living, Inc.

This is the story of Elisabeth Bathory, a 17th-century Transylvanian countess. She was tried as a vampire and became an inspiration for depraved murderers up…

This biography explores the life of the 16th-century “Blood Countess” of Hungary, Erzsébet Báthory. Reputed to be both a vampire and the world’s worst female…

Szépasszony Pronounced: Sayp-uh-sohn-ye There is no fury like a goddess scorned. Szépasszony is a pre-Christian Hungarian love goddess now demoted to a beautiful but dangerous…

Anthropomancy Anthropomancy or hepatoscopy is a method of divination by the entrails, particularly the intestines, of dead or dying men or women, often virgin female…