Bigfoot is unquestionably North America’s biggest cryptozoological mystery. But we have had to learn to share it with the world; the name Bigfoot is applied to any hairy unknown hominoid reported today anywhere around the globe. For our purposes, however, “Bigfoot” denotes those unknown hairy hominids reported in the Pacific Northwest of the United States and believed to leave large human-like footprints and to walk upright.

But it was not always so, even in North America. The Canadian version of Bigfoot, called “Sasquatch,” has an even longer history. According to researchers John Green and Ivan T. Sanderson, this Indian-sounding word was coined in the 1920s by J. W. Burns, a teacher who for years collected stories about wild, hairy giants from his Chehalis Indian friends. Burns combined several similar Native Canadians’ names for these creatures and created the word “Sasquatch.” In recent years, scientists and folklorists looking to bring respectability to the subject have been using that more sober-sounding name. But most North Americans still call these creatures “Bigfoot.”

The first use of the now widely used label did not occur until a quiet, churchgoing construction worker named Jerry Crew appeared at a northern California newspaper office with the plaster cast of one of many large hominid footprints he had found in the mud in Bluff Creek Valley. His widely reprinted account—and photograph holding the massive footcast, which stretched across his upper torso—first appeared in the Humboldt Times, along with the word “Bigfoot,” on October 5, 1958. The story was written by the paper’s “RFD” columnist and editor Andrew Genzoli, who introduced the word “Bigfoot,” as the road construction workers were calling this big-footed creature, to the outside world.

The naming of Bigfoot was a significant cultural event. To deny this would be to ignore how intrinsic Bigfoot has become in global day-to-day living, as evidenced in scores of examples. Today Bigfoot can be seen used as a name for skateboards, pizza, big trucks, and other commercial products. Since the advent of Bigfoot, the word has made it easier for law-enforcement officers, media reporters, and the general public to accept sightings of all kinds of unknown hairy hominoids.

The classic Bigfoot of the Pacific Northwest is reported, in the most concentrated fashion, in the northern corner of the United States (northern California, Oregon, Washington, and Idaho) and far western Canada (British Columbia and Alberta), with lesser activity up through Canada into Alaska. In the vastness of these montane forests, the idea that an undiscovered, extraordinary primate could survive, albeit fantastic, is at least imaginable.

Bigfoot is bulky and stocky, with an enormous barrel torso and a height, when mature, of six to nine feet. The creature has a small, pointed head, with no neck or forehead. Its eyes are small, round, and dark, and stare forward. The face is light in young, dark in older individuals, with a heavy brow ridge and a continuous upcurled fringe of hair on the brow ridge. The hair covering is shaggy. There is no difference between body and head hair. All of it is relatively short, with darker colored hair at younger ages, moving into red-browns with some evidence of silver at extreme maturity. The distinctive footprint, as the name implies, shows a track as left by a giant five-toed human foot. The average length is fourteen to sixteen inches long. When the first Bigfoot incidents, noted above, occurred in October 1958, the massive tracks in the mud near Bluff Creek, California, all measured sixteen inches long and were seven inches wide.

Bigfoot is generally nocturnal and mostly solitary, although some sightings have reported family groups. From their calls it appears that they have no language. They emit high-pitched whistles, calls, animal-like screams, howls, “eeek-eeek-eeek,” “sooka-sooka-sooka,” “ugh-ugh-ugh,” or “uhu-uhu-uhu.” According to Sanderson and other chroniclers, the creatures may on occasion kidnap human females (and, at least according to some folk traditions, males).

Californian and Canadian Indians have many folktales that arguably refer to the Bigfoot and Sasquatch. Sanderson believed that the description of the California hairy big man, oh-mah, closely matched those of Bigfoot.

One of the most often told, most spectacular accounts is Albert Ostman’s. Ostman, a British Columbia man, came forward in 1957 to recount an incident that he said had taken place in 1924. While on a prospecting trip at the head of Toba Inlet, opposite Vancouver Island, he was gathered up one night inside his sleeping bag and after many miles dumped out, to discover that he was the captive of a family—adult male and female, juvenile male and female—of giant ape-like creatures. Though they were friendly, they clearly did not want him to escape from their canyon home, and he managed to do so only after six days when the older male choked on Ostman s snuff tobacco. Those who interviewed Ostman did not doubt his sincerity or sanity, and Sasquatch investigator Green, biologist Sanderson, and Smithsonian anthropologist John Napier all separately wrote that his account was convincing and did not sound false.

Late in the 1950s, Sanderson wrote two articles for Argosy, a men’s adventure magazine, calling Bigfoot “America’s Abominable Snowman.” He caught the American imagination, and hundreds of people wrote him for more details. Sanderson followed up with his Abominable Snowmen: Legend Come to Life (1961), the first book to discuss Bigfoot/Sasquatch in any comprehensive manner, and linked the North American reports with worldwide traditions of other hairy hominoids such as Almas and Yeti.

Among those who went looking for Bigfoot after they read the first Argosy article was Roger Patterson, a rodeo rider and author of Do Abominable Snowmen of America Really Exist? (1966). Patterson’s searching paid off and he, along with companion Bob Gimlin, filmed the now famous Patterson Film of a large female Bigfoot on October 20, 1967.

Patterson died in 1972, swearing to the authenticity of both sighting and film. Gimlin, still alive, also sticks by the story. The first investigator on the site, Bob Titmus, found tracks corresponding exactly to the creature’s route as depicted in the film and made casts of ten of them. 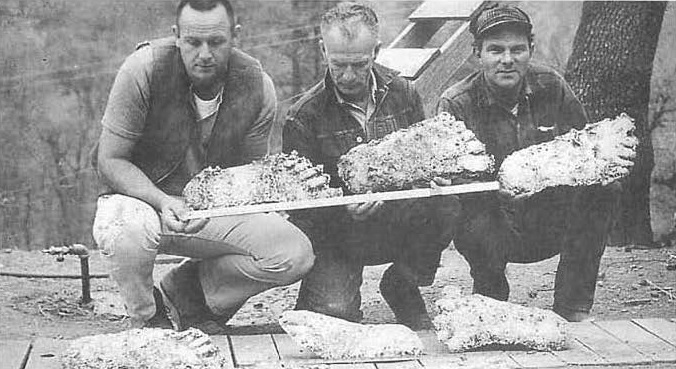 Intriguingly, the two most historically significant Bigfoot incidents—Crew’s first finds in 1958 and the Patterson Film of 1967—took place near each other at Bluff Creek, California. The sets of footprints from both events show similar but not identical creatures were involved. Unfortunately, as the years have seen copies of these two sets of prints mass-copied, hoaxers have employed plaster casts of these genuine tracks to create some confusing hoaxes throughout the United States and Canada. Most tracks of Pacific Northwest Bigfoot, however, show distinctive forensic features that to investigators indicate they are not fakes. The occurrence of tracks in remote, seldom-traveled areas also argues against the hoax hypothesis.

Other evidence consists of feces and hair samples associated either with sightings or with other indications of a Bigfoot’s recent passage. Some of these have been identified and linked with human beings or known animals. In a few cases the samples seemed to resist such identification. In one analysis by a Tom Slick-sponsored Bigfoot expedition, fecal matter was found to contain parasites that were unknown, thus indicating they were from an unknown animal.

If Bigfoot is out there, it is almost certainly a relative of ours.

Sanderson classified these creatures as Neo-Giants, giant unknown primates, an analysis echoed by Loren Coleman, Mark A. Hall, and Patrick Huyghe. (The truly huge Bigfoot is what researcher Hall calls True Giant.) Grover Krantz theorizes that Bigfoot is an example of a relict population of the long-extinct Ice Age giant ape-like creature, Gigantopithecus. In Big Footprints (1992), Krantz argues that no new name is needed for Bigfoot, since the animal responsible for Bigfoot sightings is already known, though thought extinct. Krantz holds that “we in fact have footprints of Gigantopithecus blacki here in North America.” Bigfooters, those currently hunting Bigfoot with guns and cameras, accept the Gigantopithecus argument because Krantz’s thoughts on the matter were widely disseminated in the 1980s and early 1990s.

However, with the publication of a new field guide to Bigfoot and similar creatures by Loren Coleman and Patrick Huyghe, the idea that Bigfoot may be a man-sized hominid named Paranthropus is gaining new attention. The notion was first proposed in scientific journals in 1971, when anthropologically oriented cryptozoologist Gordon Strasenburgh wrote that Bigfoot would be found to be related to Paranthropus robustus. He proposed the name Paranthropus eldurrelli to be specifically used for the Pacific Northwest Bigfoot. Because of the apparent sagittal crest of the Bigfoot in the Patterson film, this candidate is getting a new look. If its existence is ever proven—and nothing short of an actual specimen will satisfy most scientists—it would, at the very least, provide revolutionary insights into human evolution.

All of these prehistoric fossil primates may have affinities to Bigfoot because of certain features, such as the overall size of Gigantopithecus and the body size and crests on the heads of Paranthropus. But until a body is scientifically examined, the riddle of Bigfoot will continue as one of cryptozoology’s biggest and most famous enigmas.

To read more about this subject click on the next page