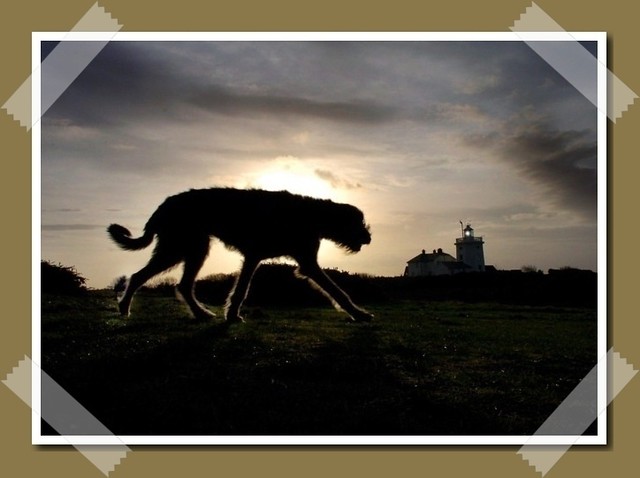 The Black Shuck is a large spectral dog in British folklore, especially in Norfolk, Suffolk, Essex and Devon—in areas steeped in supernatural and witchcraft lore. Sightings of Black Shuck continue in contemporary times. His appearance is often taken to be a Death Omen.

The origins of Black Shuck, including his name, are uncertain. The spectral dog may have entered Britain from Norse mythology brought by early Viking invaders, who told stories about the black war hound of Odin (Woden). Or, the dog may have sprung from the early days of smuggling in Britain. Stories about a fearsome spectral dog roaming coastal areas at night certainly could have inspired people to stay indoors while smugglers went about their business.

The name Black Shuck may have come from a local word, “shucky,” meaning “shaggy.” Some believe that Black Shuck’s name derives from an Anglo-Saxon term scucca or sceocca, meaning “Demon” or “Satan.” Other names are Old Shuck, the Galleytrot, the Shug Monkey, the Hateful Thing, the Churchyard Beast or Hellbeast, Swooning Shadow and the Black Dog of Torrington.

Black Shuck is described as an all-black creature about the size of a calf. He has large eyes that glow yellow, red or green as if on fire. Sometimes he is one-eyed like a cyclops. Often, he is headless, yet his eyes—where eyes should be—glow in the dark. He may wear a collar of chains that rattle as he moves.

Black Shuck roams coastlines and also haunts graveyards, lonely country roads, misty marshes, or the hills around villages. In certain areas, he frequents old straight roads or trackways said to be leys, lines of invisible earth energy known to ancient peoples who used them to site villages and sacred places.

On stormy nights, Black Shuck’s bone-chilling howls can be heard rising above the wind. His feet make no sounds and leave no prints, but travellers feel his icy breath upon their necks. To meet or see Black Shuck means death or misfortune within a year. In Suffolk, however, it is believed that Black Shuck is harmless as long as he is not bothered. In parts of Devon, it is bad luck to even speak of the Black Dog.

People who travel in the countryside at night say they see his dark form leaping across the road in front of them or racing along lonely country roads. One case reported in 1972 involved an officer with Her Majesty’s Coastguard who spotted a black dog on Yarmouth beach in East Anglia. Graham Grant was on duty at the coastguard headquarters on Gorleston South Pier on April 19. At dawn he was scanning the coastline with binoculars when he saw a “large black hound-type animal” running up and down the beach as though it were looking for someone. He did not notice anything unusual about its appearance. He watched it for about two minutes, and then the dog just faded away from his vision. Grant thought perhaps it had fallen into a hole, but the beach had been bulldozed the day before and was flat and smooth. The animal did not reappear over the next hour that Grant continued to observe the beach.

But about 10 weeks later, during the last week in June 1972, Cox, who was in his mid-50s, collapsed and died of a heart attack while sitting in the same chair from which he had recounted the Black Shuck story to Grant. And in February 1973, Grant’s father died of heart failure in his home in Yorkshire. Interestingly, the area where Grant saw the dog has been linked to Black Shuck for many years. The spectral dog especially haunts a road that was an old trackway from Gorleston to Great Yarmouth.

Both the legends of Black Shuck and the Whisht Hounds are said to have inspired Sir Arthur Conan Doyle in his writing of The Hound of the Baskervilles. Spectral black dogs in general haunt numerous locales and play a role in many haunting legends. They also are associated with the Devil, who is said to often assume the shape of a black dog, and with witches.

Black dogs are common Apparitions. Phantom black dogs are widespread and sometimes concentrated in particular areas, where they become known by names such as Black…

barghest (also barguest) In English folklore, a spectral hound said to exist in Cornwall and northern England. As a DEATH OMEN, it manifests as a…