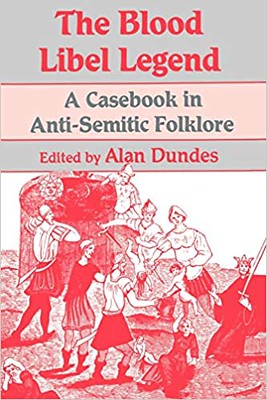 Alan Dundes, in this casebook of an anti-Semitic legend, demonstrates the power of folklore to influence thought and history. According to the blood libel legend, Jews murdered Christian infants to obtain blood to make matzah. Dundes has gathered here the work of leading scholars who examine the varied sources and elaborations of the legend. Collectively, their essays constitute a forceful statement against this false accusation.

The legend is traced from the murder of William of Norwich in 1144, one of the first reported cases of ritualized murder attributed to Jews, through nineteenth-century Egyptian reports, Spanish examples, Catholic periodicals, modern English instances, and twentieth-century American cases. The essays deal not only with historical cases and surveys of blood libel in different locales, but also with literary renditions of the legend, including the ballad “Sir Hugh, or, the Jew’s Daughter” and Chaucer’s “The Prioress’s Tale.”

These case studies provide a comprehensive view of the complex nature of the blood libel legend. The concluding section of the volume includes an analysis of the legend that focuses on Christian misunderstanding of the Jewish feast of Purim and the child abuse component of the legend and that attempts to bring psychoanalytic theory to bear on the content of the blood libel legend. The final essay by Alan Dundes takes a distinctly folkloristic approach, examining the legend as part of the belief system that Christians developed about Jews.

This study of the blood libel legend will interest folklorists, scholars of Catholicism and Judaism, and many general readers, for it is both the literature and the history of anti-Semitism.

Vampires are the most fearsome and fascinating of all creatures of folklore. For the first time, detailed accounts of the vampire and how its tradition…

The essays of Alan Dundes virtually created the meaning of folklore as an American academic discipline. Yet many of them went quickly out of print…

With great reverence for the Bible, Dundes offers a new and exciting way to resolve some of the mysteries and contradictions that evolved during the…

Vampiir (Vam-PEER) In northern Europe, in the Republic of Estonia, the concept of a blood-drinking vampire was imported from the neighboring countries of Latvia, Finland,…