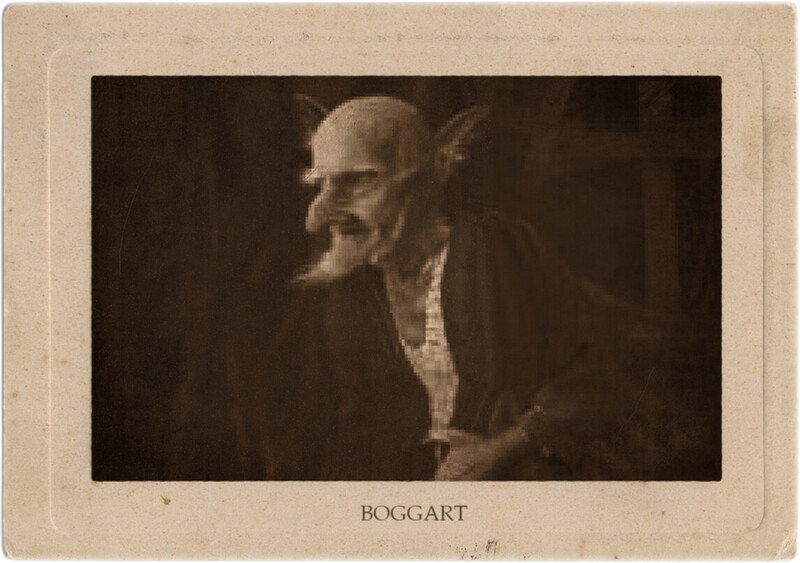 A Boggart is a type of a hobgoblin or ghost; a supernatural being of English folklore, especially of Lancashire and Yorkshire, very mischievous, sly, and annoying: often invoked to frighten children. Threats of being thrown into some black “boggart-hole” are usually enough to silence the expression of any childish woe. The Lancashire and Yorkshire boggart is equivalent to the Scottish bogle and the puck of general English folklore. There is a typical old Lancashire verse which runs:

The boggart is full of tricks and devilment but seldom works serious harm. Sometimes he walks through
the rooms at night, twitches the covers off sleeping people, or raps loudly on the door and never comes in or answers. Sometimes he rearranges the furniture so that people who have to get up in the dark bump into
it; or sometimes he lays the baby gently on the floor, just to astonish its parents who find it safely sleeping there in the morning.

The boggart is often a helpful kind of spirit to have around the house. He has been known to wash the dishes, milk the cows, feed the horses, or even harness them on occasion. But if he is angered in any way, he will break the cups, upset the cream that has been set for butter, or unfasten the cow or horse to let it wander in the night. Nearly every old English house had its own boggart, variously regarded either as a ghost or as the mischievous trick- playing spirit just described.

The boggart of Staining Hall (near Blackford) was the uneasy ghost of a murdered Scotchman; the boggart of Hackensall Hall lived in the shape of a horse who was a willing worker as long as he was catered to. The people even built him a fire to lie by on cold nights, and if he did not get it he complained loudly, or refused to work. But boggarts are less and less frequently seen and heard today; that is because they are afraid of automobiles.

…is the title of a Lancashire folktale, also well known all over Europe. It is the story of a farmer who was so annoyed and tormented by a boggart who had taken abode in his house, that he decided to pack up his belongings and move with his wife and children to another place. As they were about to drive off, the man explained to a neighbor, Yes, they were flitting because of the boggart who was making life unendurable, only to hear a voice say, from the top of the loaded wagon,

“So you see, Georgey, we’re flitting.”

The man gave up; he decided to remain in his old home rather than undergo the old annoyances in a new place.

A bogey is a type of horrible evil spirits or hobgoblins, travelling alone or in groups, that love to make mischief. Bogies go by various…

A goblin is a small, hideous, and often mischievous or evil spirit. The prefix “hob” is sometimes used to denote “good” goblins. In French folklore,…

In the village of Dilworth, on the slope of Longridge Fell, a steep-sided lane leads to what is known either as Written Stone Farm or…

In Bradwell: Ancient and Modern (1912), Seth Evans tells the story of the ‘Lumb Boggart’ (‘Lumb’ coming from the Old English word for a pool).…