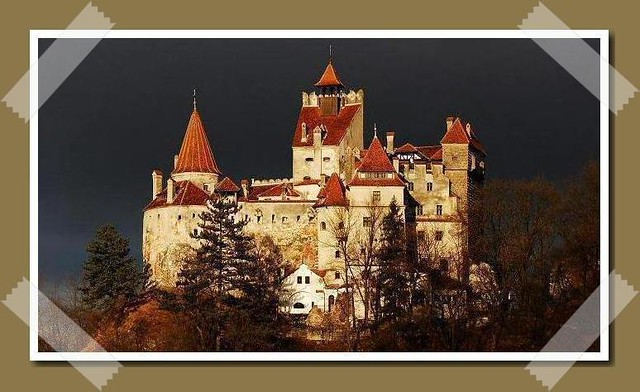 BRAN CASTLE BRAN ROMANIA WEBSITE: www.draculascastle.com In the Romanian village of Bran, about 15 miles southwest of Brasov in the Carpathian Mountains, lies Bran Castle. Built in 1377 to protect the city of Brasov from invasion, today the castle is more commonly referred to as “Dracula’s Castle” because it was once a residence of Prince Vlad Tepes, aka “Vlad the Impaler,” son of Vlad Dracul (Dracul meaning “Devil”), who was a knight of the Dragon Order. Vlad used to sign his name “Draculea” or “Draculya” or “The Devil’s Son.” He’s now best-known as the historical basis for Bram Stoker’s Dracula. Between 1456 and 1462, Vlad Tepes was a strict ruler of Wallachia, but to his credit, he increased trade and the strength of his army. According to his legend, he was ruthless against any who stood against him, and his infamy grew in his battles against the Ottoman Empire. Though not the only military leader to incorporate this practice, Vlad was known to impale his captives on long spears—many times while they were still alive. Dying in this way could sometimes take hours if one was unlucky. Bran Castle may still be home to some of the many tortured souls who died at Vlad’s hand. In the courtyard, there is a fountain that conceals a hidden tunnel some 50 meters below the surface. Guests who know where to look and listen have claimed to have heard moans coming from within the tunnel. But victims aren’t the only spirits said to haunt the castle. Many believe Vlad himself still passes through the castle and its grounds. He seems to be most active in the chamber he once used. People have photographed strange, glowing mists and light streaks within his room. Today, the castle offers tours six days a week for those who want to walk were Vlad once stood.

If you want to discover the captivating history of Vlad the Impaler, then keep reading… The Balkans were the home of both the vampiric stories…

Vlad Tepes (1431–1476) Voivode (prince or ruler) of Wallachia, a province south of Transylvania and now part of Romania, and namesake of BRAM STOKER’s vampire,…

On an ancient hill of limestone and shale 30 meters above the Dunajec River is one of southern Poland’s most haunted locations: Niedzica Castle. The…