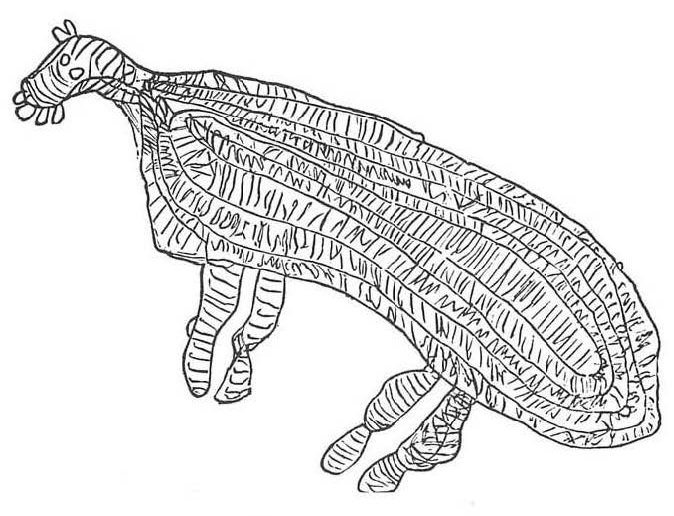 An Australian aboriginal drawing of a Bunyip made in 1848. (FPL)

The Bunyip, a legendary, elusive, creature, figures in reports that range back in time into the oral folklore of the Aboriginal people of Australia and continue into the present day. Particularly intriguing reports have come from around Lake George and Lake Bathurst, both near the Australian Capital Territory, a place notorious for sightings of other cryptids such as Alien Big Cats, Yowie, and even the Queensland Tiger. Interestingly, Lake George and Lake Bathurst are sacred places to Aboriginal people of the area.

What is a Bunyip? “Not an easy question to answer,” remarked cryptozoologist Bernard Heuvelmans in 1955 in On the Track of Unknown Animals. It is no simpler to find a solution almost half a century later. The word itself means “bogey” in Australia today and seems to have an Aborigine origin meaning something like “devil” or “spirit.” Heuvelmans thought it came from the word buynil, which Victorian-era Aborigines used for their Supreme Being. Over time, European colonists used Bunyip to refer to any mysterious animal. But down through the years, the word “Bunyip” has mostly been employed to describe one cryptid that has been reported for more than two hundred years in Australia. Generally it has been described as a large, hairy, semi-aquatic creature with the head of a horse. The body of the creature is generally not reported because sightings occur within rivers or lakes. Nevertheless, in some eyewitness encounters, a few good views of the creature have occurred, reports Charles Barrett, in his classic, The Bunyip (1946).

During the 1800s, several close-up sightings of the Bunyip occurred in New South Wales. Lake George was the frequent location for many sightings of the Bunyip, especially in the 1830s. Nearby, early in April 1872, a shepherd camped at Midgeon Lagoon saw a strange, fast-swimming beast, much larger than a retriever dog, covered with shining, long jet-black hair. It was tailless but had large ears. A Melbourne Zoo expedition of 1890 failed to capture a Bunyip frequently seen in the Euroa district near Victoria. Similar water monsters have been reported from Tasmania, and Heuvelmans mentions Bunyip sightings as recently as 1932, near the large hydroelectric dams there.

The Oxford Companion to Australian Literature defines the Bunyip rather nicely as “a monster of Aboriginal mythology with a huge body covered with fur… said to live in swamps, lagoons and billabongs from which it emerges on moonlit nights to prey on humans, especially women and children.” Cryptozoologists find no basis in fact for the aggressive behaviour traits the dictionary attributes to the Bunyip.

Bunyips are spirits or creatures found in Australian aboriginal folklore.
Descriptions of these beings vary from story to story. Some tales mention flippers or tusks, scales, or a hairy tail. But all tales agree that bunyips are evil spirits that live in water. Most often they are described as inhabiting creeks, swamps, or billabongs, the pools or water holes that form near rivers during Australia’s wet season.

Bunyips take delight in terrifying people at night with their horrible roar. Some of the darker stories claim that bunyips slip from the water at night and hunt down women and children. Many white settlers have claimed to have seen bunyips.

Various aboriginal clans have given local names to bunyips, such as Yaa-loo, Dongu, Kine Pratie, and Wowee-wowee. Bunyips also feature prominently in Australian children’s literature, and the word bunyip has taken on the meaning of “imposter” in modern-day Australian slang.

From : Storytelling – An Encyclopedia of Mythology and Folklore. Edited by : Josepha Sherman

Bunyip In Australian mythology, an evil water monster who lives in mud at the bottoms of lakes. Also called Moolgewanke, he pulls his victims down and drowns them. He is depicted as half man, half fish, and has a crop of reeds in his hair.

A bunyip is a mysterious beast supposedly spotted in various lakes, rivers, swamps, lagoons, and other bodies of water in Australia, but particularly in Canberra’s Lake George. The name probably means “spirit” in the Aborigine language. The creature is typically described as having a horselike head that rises above the water while the body stays beneath the surface. However, some who have reported seeing it claim that the creature has a fur-covered torso shaped like a dog’s, only much bigger. The bunyip was first mentioned in the tales of Australia’s native people, known as Aborigines, hundreds of years ago, leading many people to believe that the creatures are simply a part of Aboriginal mythology. In some of these ancient tales, though, the bunyip is said to attack women and children, whereas none of the more recent sightings involve such behaviour. Believers in the modern bunyip say that even though the same name is used for both, the Aboriginal tales refer to a slightly different creature. SEE ALSO: lake monsters