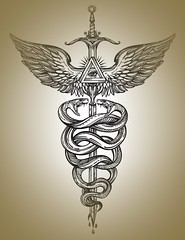 A caduceus is a wand entwined by two snakes and topped by wings or a winged helmet. The caduceus is associated with Magic, spiritual enlightenment, wisdom, immortality, and healing. The T shape of the caduceus is derived from the tau cross, a T-shaped cross used in the ancient Egyptian and Mithraic mysteries initiations.

The caduceus is most strongly associated with Hermes, the Greek messenger god of magic who flies as fleet as thought. Hermes carries his magical wand when escorting souls to the underworld. Hermes’s caduceus is made of olive wood, symbolic of peace and the continuity of life. The wand’s shaft represents power; the serpent s represent wisdom or prudence; the wings represent diligence, and the helmet represents high thoughts. With a touch of his caduceus, Hermes puts mortals to sleep or raises the dead. He cures any illness and changes whatever the wand touches into gold. The Romans, who called Hermes Mercury, viewed the caduceus as a symbol of moral conduct and equilibrium.

The association of the caduceus with gold and the powers of transmutation made it a symbol of the philosopher’s stone in alchemy. In alchemy, the entwined serpents take on the additional symbolism of masculine and feminine forces, which must be in balance for transmutation to occur.

The caduceus appears in Mesopotamian cultures in about 2600 b.c.e. where its serpents signified a god who cured illness. The association of the caduceus with medicine and health was passed from the Middle East to the Greek culture. Asklepios, the Greek god who heals in dreams, possesses a staff entwined by a single serpent.

In ancient India, the caduceus appeared in temples as a symbol of the four elements: the wand (earth), the serpents (fire and water), and the wings (air).

In Yoga, the caduceus represents the transformation of spiritual consciousness through the vehicles of the body’s pranic energy system. The wand is the spine, and the serpents are the kundalini force, or serpent power, which resides in the earth and at the base of the spine. When stimulated either through spiritual study or sometimes emotional shock, the kundalini entwines up the spine and flowers with wings at the top of the head. The wings signify the rise of the consciousness through higher planes of awareness.

In freemasonry, the caduceus represents the harmony and balance between negative and positive forces, the fixed and the volatile, the continuity of life and the decay of life.

caduceus (herald staff) In Greek and Roman mythology, a magic wand consisting of a rod topped by wings and intertwined by two snakes; called kery keionin in Greek. The caduceus was carried by Hermes in Greek myths and Mercury in Roman mythology. Originally, the caduceus was represented as a simple staff wound about with two white ribbons. It was a symbol of authority and inviolability and protected the herald who carried it. In Homer’s Iliad and Odyssey the caduceus is often mentioned as a type of magic wand by which Hermes opened and closed the eyes of mortals. It was therefore connected with death and the journey through the underworld. Later myth says Hermes once threw his magic wand at two snakes fighting on the ground. The snakes became entangled in the magic wand and have been attached to it ever since. The wings at the top were added in later Greek and Roman art. In Vergil’s Aeneid (book 4) the caduceus is said to have been given to Mercury by Apollo in exchange for the lyre. Milton, calling it Hermes’ “opiate rod” in Paradise Lost (book 11.133), refers to the belief that the caduceus can induce sleep. Today the caduceus is associated with medicine because it was one of the symbols of Asclepius, the god of medicine for the ancients. Le Sage, in Gil Blas (1715) writes: “I did not think the post of Mercury-in-chief quite so honorable as it was called . . . and resolved to abandon the Caduceus [give up the medical profession] for ever.”

serpent Ancient symbol of wisdom and fertility, but in Christianity turned into a symbol of evil, the Devil, and Satan. The serpent is a favourite…

Hermes is a Greek messenger god, swift and cunning, portrayed with winged feet, wearing a winged helmet and carrying a caduceus, a serpent-entwined, magic wand…

Iris (rainbow) In Greek mythology, goddess of the rainbow and messenger of the gods; daughter of the sea deities Thaumas and Electra. Homer’s Iliad (books…

serpent/snake A Symbol of great power indicating change, renewal, and transformation. The serpent, or snake, is a potent archetype of psychic energy, power, dynamism, instinctual…