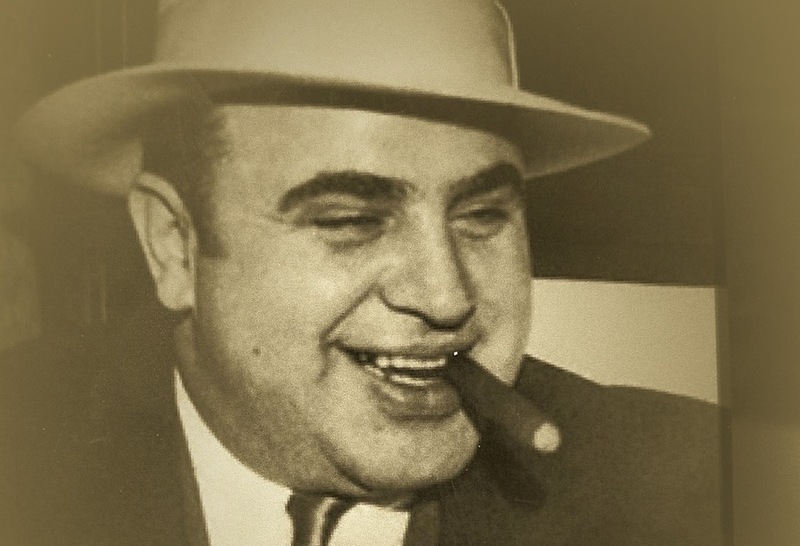 Alphonse “Scarface” Capone (1899–1947) One of America’s most famous and violent gangsters who rose to power during the Prohibition era of the 1920s. Alphonse, or Al, Capone has entered ghost lore as both a haunting presence himself and as an experiencer of ghosts while alive.

Capone was born on January 17, 1899, in Brooklyn, New York, to Italian immigrant parents. He exhibited an aggressive personality early—in the sixth grade he beat a female teacher, an incident that forced him out of school. He gravitated to gang life and crime, which offered a more glamorous and lucrative life than he could obtain through low-paying jobs. He made a reputation for himself with the notorious Five Points gang run by Johnny Torrio and Lucky Luciano, of which several of his cousins were members. Capone was a thug in the truest sense—brutal and rough. He had two parallel scars running down his left cheek, earned in a knife fight, which gave rise to his gang nickname of Scarface. Other gangsters knew him as Scarface Al Brown.

Torrio moved to Chicago and became the bodyguard of Jim Colosimo, who controlled prostitution on the southside of town. In 1918, Capone argued with a man in a bar and killed him. He appealed to Torrio for help to evade arrest and fled to Chicago in 1919. He became Torrio’s first lieutenant and chief gunman. His temper remained legendary; he once kicked the mayor of Cicero, Illinois, down the steps of a courthouse while police officers looked on and did nothing.

On January 16, 1920, the Prohibition Act became law, and illegal bootlegging and drinking exploded. Torrio wanted a piece of the action, but Colosimo refused to get into the business. On May 11, 1920, Colosimo was murdered, gunned down by Capone on the orders of Torrio.

With Colosimo gone, Torrio and Capone solidified their power in southside Chicago in the illegal alcohol market. The northside of Chicago was controlled by mostly Irish gangs, the strongest of which was run by Dion O’Bannion. In 1922, the south and north gangs began battling for turf. In 1923, Torrio had O’Bannion murdered, and all-out gang war erupted. In 1924, the Irish, led by Hymie Weiss and George “Bugs” Moran, attempted to assassinate Torrio, but he recovered from the bullet wounds to his chest and neck. In 1925, Torrio was sent to prison for nine months on Prohibition violations. When he was released, he turned his gang operations over to Capone and went to live in Naples, Italy.

At age 25, Capone found himself at the head of a major gang empire, running bootlegging, speakeasy, gambling, and prostitution operations. Politicians and law enforcement officials were on his payroll. He was at the height of his violent career at a time when law enforcement was lax. Once he even killed two of his own men who displeased him, beating them to death with a club or bat. He lived in grand style. In 1927, he appeared in the Guinness Book of World Records for acquiring $105 million, the highest gross income ever acquired by a private citizen in a single year. He had popular appeal. Ruthless to the core, he ordered the deaths of more than 500 men; about 1,000 people died during his reign of terror.

Meanwhile, serious warfare with the northside Irish gangs continued. Weiss tried unsuccessfully to kill Capone; Capone eventually succeeded in having Weiss murdered, which made Moran the top northside gang leader. On February 14, 1929, the bloodiest gangland hit in the history of Prohibition was carried out—the ST. VALENTINE’S DAY MASSACRE. Seven of Moran’s men were brutally gunned down in Moran’s garage headquarters. Moran himself only escaped by arriving late. Capone, who was in Florida at the time, was widely believed to be responsible for the hit, but no charges were ever filed against him. In May 1929, Capone and his bodyguard, Frankie Rio, were arrested in Philadelphia on charges of carrying concealed weapons. They were convicted and sent to EASTERN STATE PENITENTIARY in Philadelphia for a year.

In jail, Capone lived in high style. His cell was furnished with his own possessions, including a radio, easy chair, and elegant lamp. He continued to conduct his business, making phone calls from the warden’s office. He was a model prisoner and was released two months early.

Upon returning to Chicago, Capone, Public Enemy Number One, discovered that the gangland scene had changed dramatically. Law enforcement was far less tolerant and was moving aggressively to put illegal operations out of business. In fact, Capone’s home was surrounded by policemen, who had orders to arrest him as soon as he arrived. Capone managed to evade them by going to Cicero. There was no actual warrant for his arrest, and so Capone was able to resume an open life from his headquarters at the Lexington Hotel, although with constant police surveillance. Officers followed him everywhere.

Capone never regained his old power. He was further undermined by the involvement of federal Treasury officers, “the Untouchables” led by Elliott Ness, who were determined to put an end to his crime empire. The Internal Revenue Service turned one of Capone’s men, Eddie O’Hare, who ran Capone’s dog and track operations. The end for Capone finally came on October 6, 1931, when he was arrested for income tax evasion.

At Alcatraz, Capone was known as “the wop with the mop” because he was assigned to be a cellhouse sweep, one of the lowest jobs. He suffered physically and mentally, as did most prisoners. Conditions were harsh, beatings were routine, and prisoners killed each other. Once while out in the prison yard, Capone was attacked by a knife-wielding inmate and was nearly stabbed to death. After that, he became reclusive, staying mostly in his cell, playing a banjo given to him by his wife. He exhibited signs of psychosis, making and remaking his bunk for hours. He served three stretches in “the hole,” the ultimate punishment for inmate infractions. The hole was a dark, dank dungeon where prisoners were forced to endure solitary confinement naked on the cold stone floors, fed only bread and water. Capone was sentenced to the hole twice for speaking and once for trying to bribe a guard.

His deteriorating condition was probably exacerbated by the fact that he had contracted syphilis, which by the time he went to Alcatraz was in a late stage. His last days in the prison were spent in the hospital ward. He was released in 1939 after serving seven years of his sentence. He was a broken man.

Immediately upon leaving prison, Capone entered a hospital in Baltimore to undergo brain treatment. He never recovered his health, but he was able to exact revenge on O’Hare, having him murdered. He retired to his mansion in Miami Beach, riding a mental health roller coaster.

Capone died of heart failure on January 25, 1947, after suffering a stroke and contracting pneumonia. He was buried in Mount Carmel Cemetery in Hillside, outside of Chicago.

Capone’s first known ghost experiences occurred while he was serving time in Eastern State Penitentiary. Although he had an easy jail life, he found himself plunged into a personal hell. He was tormented frequently by the ghost of James Clark, the brother-in-law of Moran, and one of the victims of the St. Valentine’s Day Massacre. His screams begging Jimmy to leave him alone resounded through the concrete halls of the prison.

Release from prison did not release him from harassment by the ghost. Clark followed him wherever he went. Capone’s men often heard Capone begging the ghost to leave him in peace. Several times, his bodyguards thought he was under genuine attack and broke into his room. A distraught Capone told them about Clark’s ghost. Once his personal valet, Hymie Cornish, entered Capone’s apartment lounge and saw a tall man standing by the window. The man vanished; Cornish believed he, too, had seen the ghost of James Clark.

Desperate for relief, Capone consulted Medium Alice Britt. Britt held a Séance to try to banish the ghost, but her efforts failed. Capone once gloomily opined that the ghost of Clark would literally follow him to his own grave.

Capone’s own ghostly presence is said to linger at Eastern State Penitentiary and at Alcatraz. At his cell at Eastern State Penitentiary, paranormal investigators have photographed ORBS and other anomalies and have recorded Electronic Voice Phenomena there. A stronger haunting presence is reported at Alcatraz, where ghostly banjo music floats from the shower room and voices are heard in Block D where the “hole” cells were located.