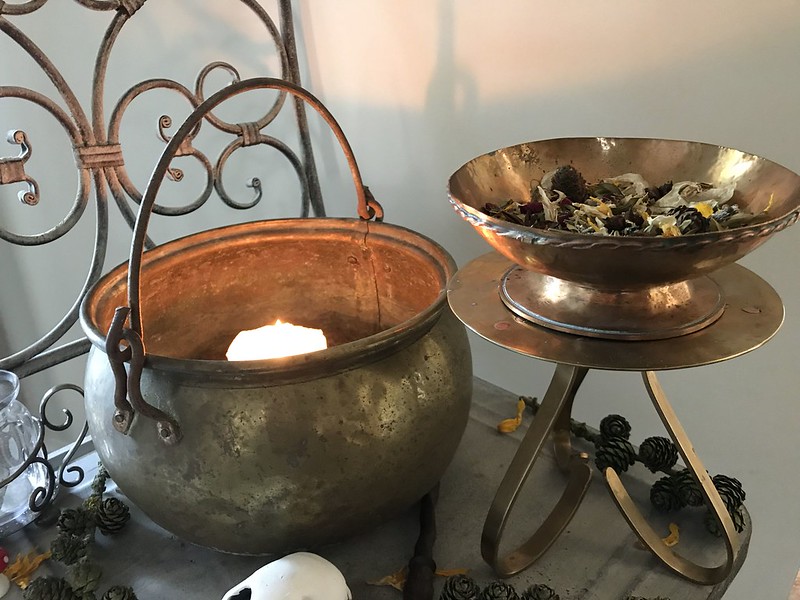 A cauldron is usually an iron pot, the cauldron is a tool of witches and sorcerers (see sorcery). In European witch lore, the cauldron was the receptacle in which POISONS, ointments and philtres were brewed. Wiccansmay have cauldrons, but use them for burning fires and incense in rituals or for decoration in the home. If used in rituals, the cauldron is placed on the witches’ altar inside the Magic circle. As a vessel, it is a feminine symbol and is associated with the womb of the Mother Goddess.

The cauldron has had a magical significance through- out history. In the lore of ancient Ireland, magic cauldrons never ran out of food at a feast. The early Celts associated cauldrons with fertility and abundance, and revival of the dead. Cauldrons were used in human sacrifice — the victims had their throats slashed over the bowls, or were drowned or suffocated in them. The Cauldron of Regeneration, of death and rebirth, the receptacle of souls and the source of inspiration, is associated with the Celtic goddesses Cerridwen and Branwen and with the Babylonian fate-goddess, Siris, who stirred the mead of regeneration in the cauldron of the heavens. Cerridwen’s cauldron was said to provide the mead of wisdom and inspiration.

Among the Celts, the priestess of the Moon goddess was required to sacrifice human victims by cutting off their heads over a silver cauldron. The blood was boiled to produce a magical drink of inspiration. The Celtic god, Cernunnos, identified with the Horned God, was torn apart and boiled in a cauldron, to be born again. Decorations on the Gundestrup cauldron, fashioned out of silver in about 100 b.C.e. and recovered from a peat bog in Gundestrup, Denmark, depict victims being plunged headfirst into a sacrificial cauldron. Sacrificial cauldrons also appear in some shamanic traditions. In Norse mythology, the patriarch god, Odin, drank magic blood from a cauldron of wisdom to obtain divine power. In Greek mythology, the witch goddess, Medea, could restore people to youth in a magic cauldron. The cauldron is linked to the chalice of the Holy Grail, which became incorporated into Christian myth.

In medieval art, literature and folktales, the cauldron was in every witch’s house, set over a blazing fire. During the witch hunts, it was believed that witches stirred up vile brews made with ingredients such as bat’s blood, decapitated and flayed toads, snakes and baby fat. Before a Sabbat witches prepared their flying ointments and drugs in cauldrons. They often carried their pots to their sabbats, where they used them to boil small children for the feast. Witches could cause storms at sea by dumping the contents of their cauldrons into the ocean (see STORM raising). One of the more bizarre cauldrons allegedly belonged to Lady Alice Kyteler, an accused Irish witch of the 14th century. Lady Alice reportedly used the skull of a beheaded robber for mixing up her poisons and potions.

According to one tale with an ironic twist, a 14th-century Scottish wizard was executed in a cauldron. William Lord Soulis, described as a pernicious wizard and perpetrator of “the most foul sorceries,” was convicted for various evil crimes and boiled to death in a cauldron (see Hermitage Castle). The cauldron also was an important tool of the alchemist in the search for formulas to change lead into gold or silver, and mold small gems into big ones.

Cauldron—The word “cauldron” is derived from the Latin caldarium, meaning “hotbath.” Cauldrons are Halloween symbols usually displayed with WITCHES, who stand over them preparing their…

Cernunnos The Horned God of the Celts, associated with the hunt and with fertility. He was sometimes portrayed with serpent’s legs, a man’s torso and…

Awen In Druidry, divine inspiration. “Awen” is Welsh for “gift of the gods” or “inspiration.” Awen is especially associated with the poetic inspiration that comes…