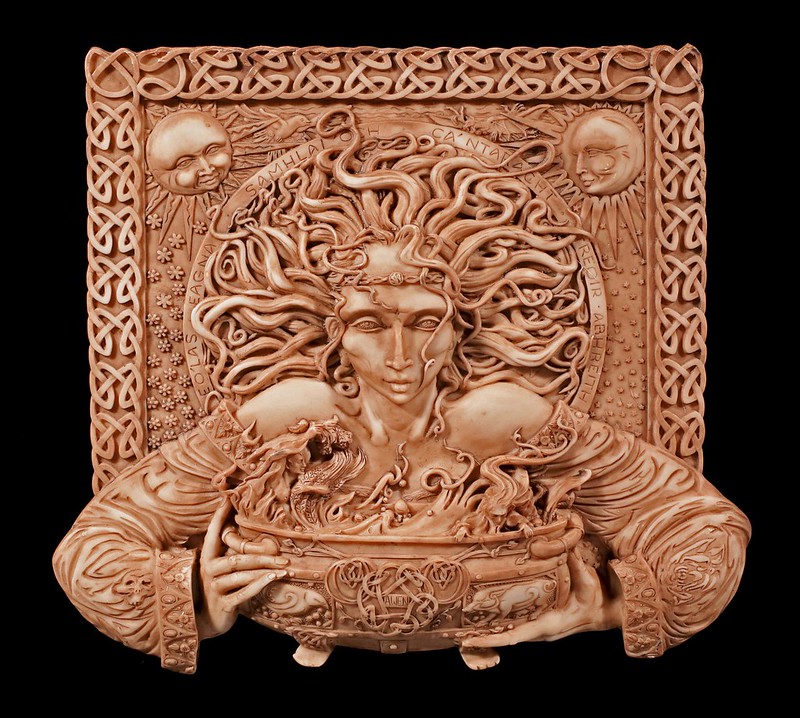 Ceridwen (Cerridwen, Keridwen) (white, blessed) In Celtic mythology, a British fertility goddess; the shape-shifting daughter of Ogyrven; wife of Tegid the Bold; mother of Crerwy, the most beautiful girl in the world, and Avagdu, the ugliest boy. She possessed a magic caldron called Amen which she kept at the bottom of Bala Lake (Wales). The caldron contained a magic drink called greal, made from six plants. When the greal was drunk, it gave inspiration and knowledge. When three drops of the caldron intended for her son Avagdu fell instead on Gwion, giving him wisdom and insight, Ceridwen pursued him. He first changed into a hare and she into a greyhound; he became a fish and she an otter; he became a bird and she a hawk; he became a grain of corn and she a hen—and finally she ate him. She then gave birth to him and threw him into the sea, and he became the bard Taliesin.

Cerridwen (also Keridwen) Celtic goddess of wisdom, intelligence, Magic, divination and enchantment. She possesses the gifts of prophecy and shape-shifting (see metamorphosis) and presides over the mysteries of the Druidic bards. She is associated with water and the Moon, which represent the emotions, the unconscious and intuition.

Her primary symbol is the CAULDRON, in which she makes a magical brew of herbs, roots and the foam of the ocean, prepared according to the movements of the heavenly bodies. The brew boils for a year and a day to yield three drops, which bestows knowledge, inspiration and science. According to the Book of Taliesin (ca. 1275), a collection of poems and songs, some of which are attributed to the sixth-century Welsh bard, Taliesin, Cerridwen prepared her magic-cauldron brew for her ugly son, Avaggdu.

She put a youth named Gwion in charge of stirring the contents. Gwion consumed the three magical drops and gained the wisdom meant for Avaggdu. The rest of the brew turned to poison and split the cauldron open. In a rage, Cerridwen pursued Gwion, intent on destroying him, but he possessed the wisdom to evade her. He changed into a hare, a fish, an otter and a bird, but she shapeshifted accordingly and kept up the pursuit. At last Gwion turned himself into a grain of wheat and hid himself among other grains.

Cerridwen turned into a black hen and ate Gwion. Nine months later, she gave birth to a beautiful baby boy, Taliesin, whom she bound up in a leather sack and threw into the sea. Taliesin was rescued by Gwyddno and Elphin, who found the sack while fishing.

Cerridwen : The White Sow; The Old One

Cerridwen is a shape-shifting lunar deity, witch, herbalist, and keeper of the Cauldron of Knowledge, Inspiration, and Transformation. Cerridwen’s most famous myth is preserved in the Book of Taliesin, a thirteenth-century manuscript named for the sixth-century Welsh poet. He is the focus of the myth: Cerridwen’s main significance in the context of that myth is as the vehicle of his transformation. However, it is the document from which most modern knowledge of Cerridwen derives. In this myth, Cerridwen is married to a giant, Tegidfoel, by whom she has two children:

• A daughter, Crearwy, whose name means “Beautiful” or “Light.”

It is theorized that these children are the Celtic equivalent of oppositional, yin-yang forces.

Cerridwen, who gave birth to them, contains and has access to all these powers. Cerridwen is a good mother: she wishes the best for her children. She doesn’t worry about her daughter but fears that her son lacks sufficient gifts for success and decides to brew a potion for him to compensate. Once tasted, this potion bestows all knowledge, as well as all magical, oracular, and shamanic powers.

Only Cerridwen knows the formula: it takes a tremendous variety of botanicals, which must be ritually gathered and then added at just the right moment. In addition, someone must continually stir the brew, which must be kept steadily boiling for a year and a day. Cerridwen finds a poor, ignorant child to watch the pot, which is where Gwion, the future Taliesin, enters the story. He awakens her rage: she pursues him with murderous intent. He finally finds safety by becoming her child: Cerridwen is ultimately unable to harm her own children.

Cerridwen’s name is interpreted as “white sow.” She is a master of transformation. There is no magical skill or botanical secret she does not know; however, secrets may be reserved for those she considers her children or initiates.

Cerridwen can take any form. The big question is not what form she will take but whether or not you will be able to recognize her. She is an occult master: every encounter with her may be considered a test of your knowledge and psychic ability.