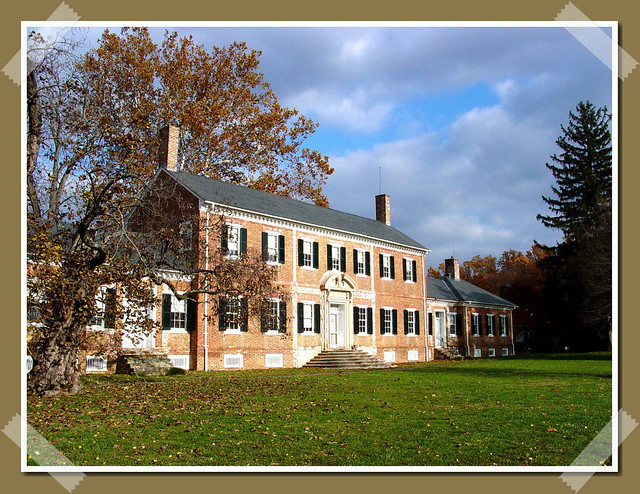 Chatham is a Georgian-style manor house in Fredericksburg, Virginia, that served as a hospital during the Ameri- 90 charms against ghosts can Civil War. Though some of the Haunting activity is attributed to the agonizing deaths that took place there during the war, the central Ghost story features the sad tale of a woman thwarted in a love affair during colonial times.

Chatham was built between 1768 and 1771 by William Fitzhugh, the wealthy owner of vast plantation holdings in Virginia. Fitzhugh intended the house to be his dream home, and he sold off some of his landholdings to finance its construction on a 1,280-acre piece of land. He named the estate after William Pitt, the Earl of Chatham, who was his friend and classmate at Oxford University.

Chatham sits high on a bluff overlooking the Rappahannock River; the town of Fredericksburg lies on the opposite bank. In its glory days, it had orchards, grain fields, cows, horses, shops, a dairy, ice house, mill, racetrack for thoroughbred horses, fish hatchery, workhouses, and living quarters for a large staff and nearly 100 slaves.

Sorrow plagued the manor home from its earliest days. Three of Fitzhugh’s daughters died in childhood. A memorial remains in the house today: a sampler with a poem in tribute to two of the girls. It was started by seven-year-old Patsy, mourning the deaths of her sisters. But Patsy tragically died before she could complete it. The sampler was finished by another sister, Molly.

Fitzhugh entertained lavishly at Chatham. One of his guests was GEORGE WASHINGTON, leader of the Revolutionary army, and first president of the new nation. Hundreds of other guests came to Chatham every year. Feeding and entertaining them proved to be such a drain on Fitzhugh’s increasingly strained finances that he moved to Alexandria, Virginia, in 1796 and put the plantation up for sale.

While Fitzhugh was living in Alexandria, some of his slaves at Chatham rebelled and whipped his overseer and four others. It took an armed posse to quell the rebellion. One slave was executed, two died trying to escape, and two were deported, probably to the Caribbean.

Besides Washington, another famous guest at Chatham was Robert E. Lee, commander of the Southern army during the Civil War (see STRATFORD). The Lee and Fitzhugh families became intertwined through marriage. Lee married the daughter of George Washington Parke Custis, Washington’s step-grandson, whose wife, Molly, was Fitzhugh’s daughter.

In 1806, Chatham was bought by Major Churchill Jones, a former officer of the Continental army. Jones’s family owned the estate for the next 66 years. During the Civil War, Chatham was owned by Major J. Horace Lacy, a former schoolteacher who married Churchill Jones’s niece. It became known as “the Lacy House.” Lacy left Chatham to become a staff officer for the Confederacy. His wife and children remained at the estate until April 1862, when Union troops seized the house and forced them to move into town across the river. ABRAHAM LINCOLN came to Chatham to consult about the movements of Union troops.

In December 1862, Fredericksburg was the scene of fierce fighting. Chatham gave Union troops a significant strategic advantage overlooking the town and the river. General Ambrose Burnside, who led the Union troops in the battles there, used Chatham as his headquarters. The Union troops abused the fine home, ripping off expensive wood paneling to burn for firewood, scribbling graffiti on the walls, and even riding their horses inside the house. The grounds fared no better—they were trampled and ruined by cannons, wagons, and camping troops.

Lacy, disgusted, sought out General Robert E. Lee and told him not to spare Chatham in shelling. Lee refused, for he, too, had been a frequent guest at the home and had even courted his wife there.

The Union army was defeated and suffered heavy casualties: 12,600 men. Hundreds were brought to Chatham, and it filled with wounded and dying men. Piles of amputated legs, feet, arms, and hands were heaped about. Clara Barton nursed wounded soldiers, and the poet Walt Whitman came in search of his younger brother who was wounded in the fighting. Whitman was disgusted with the carnage. Dead bodies were placed all over the grounds, and 130 bodies were buried on the property. After the war, they were moved to the National Cemetery. However, the marked graves of three Confederate soldiers still exist on the grounds today.

Chatham’s woes did not end with the fighting in 1862. Union troops continued to scavenge its resources. In fighting in 1863, many of the 1,000 casualties suffered by the Union were sent to Chatham. By the end of the war in 1865, Chatham was nearly ruined. Its floors were bloodstained, its panelling was ripped off, its gardens were trampled, and its grounds had become a cemetery. Graffiti covered the walls; some remains today.

The Lacys returned, but lacked the funds to repair the house. They sold it in 1872.

Chatham then passed through a succession of owners, who found the estate prohibitively expensive to operate. More and more of the estate was sold. In the 1920s, it was purchased by Daniel and Helen Devore, who began restoration. The last private owner of the house was John Lee Pratt, who purchased Chatham in 1931 and bequeathed it to the National Park Service. Pratt died in 1976. The house is now a major tourist attraction.

The agony, death, and horror of the Civil War fighting seems to have left few Haunting imprints on Chatham, though visitors report phenomena such as cold spots, ghostly voices, and impressions of Civil War soldiers. Some paranormal investigations have captured Electronic Voice Phenomena inside the house and on the grounds.

The haunting of Chatham concerns a lady in white. The story may be a mixture of fact and legend, or even mostly legend. The woman’s name remains unknown. An account of the Ghost exists in early 19th-century French literature. The story gained more attention in the early 20th century when Mrs. Randolph Howard, who lived at Chatham from 1909 to 1914, saw an APPARITION of a woman in white walk across the grounds on the afternoon of June 21st one year. The figure, dressed in a flowing gown, walked up and down the front lawn where the old colonial carriage lane had been.

According to the story, a distinguished Englishman— also name unknown—came to America with his beautiful daughter in order to discourage her love affair with a drysalter, a tradesman who dealt in salted foods, dyes, and dry chemicals. The father considered the young man beneath their social status. They were invited to stay at Chatham by Fitzhugh; George Washington was staying there at the same time. The father did not know that the drysalter had secretly followed them and had begun using a Chatham servant to communicate with the girl. The two planned to elope. The father found out and started locking the girl in her room every night.

Determined to succeed, the drysalter got through a message to his beloved that he would appear at Chatham one night to take her away. She was to secure a rope ladder to use to escape from her room. The plot was discovered by a manservant of George Washington, who then had the drysalter detained. When the girl climbed down her rope ladder that night, she was caught by Washington. He delivered her back to her father.

The father took his daughter back to England and forced her to marry another man. She had 10 children. But she never got over her lost love, the drysalter, and vowed on her deathbed to return to Chatham on the anniversary of her death to search for him.

The girl died on June 21. Her ghost is said to appear at Chatham every seven years (it is not known why there is a seven-year gap between appearances).

The 19th-century French account of the story was written by a Frenchman who visited Chatham in the early 1800s and was told the story. It has since been written about many times, bolstered by the lady in white seen by Howard in the early 20th century. Given that it is a romantic tragedy with no names, it is probably more fiction than historical fact. Washington did stay at Chatham, but there are no records associated with him to validate the story.

The ghost failed to make her scheduled appearance in 1986—or at least she was not observed by any of the National Park Service employees who kept vigil in the house and on the grounds until midnight.

Kenmore is a Georgian-style great house in Fredericksburg, Virginia, said to be haunted by its original colonial owner, Fielding Lewis. History Fielding Lewis was a…

Stratford Birthplace of Robert E. Lee, commander of the Confederate Army during the American Civil War. Haunting phenomena and several Apparitions have been reported at…

From the image of a lifeless body hanging from a tree to the relentless torture of a rural Tennessee family, all-powerful Kate was the personification…

Woodlawn Plantation Stately 19th-century home of the foster daughter and nephew of George Washington, haunted by several ghosts. Most of the ghost stories date to…