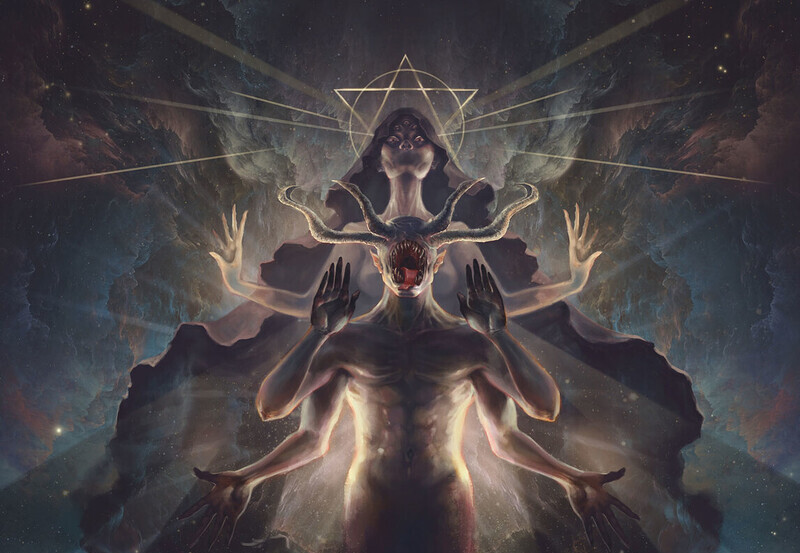 Choronzon (Coronzon) is a Demon or spirit identified in the 16th century by John Dee and Edward Kelly, summoned in a dramatic ritual by Aleister Crowley in 1909. Dee referred to “Coronzon,” or 333, in his Enochian communications with spirits; he did not consider it to be a Demon. Crowley called Choronzon the Demon of Dispersions and of the Abyss.

The account of Crowley’s evocation is full of drama; it is not known whether the events happened as objective experiences or were experienced as visions. Crowley claimed to have conquered Choronzon to become a full Master of the Temple and Secret Chief. The evocation was performed in 1909. In November, Crowley and Neuberg went to Algiers on holiday and walked south through the desert to Aumale. There, Crowley was summoned by the voice of Aiwass, the entity who had dictated to him The Book of the Law, to “call Me.” He had with him the Enochian Keys of Dee and Kelly used to communicate with angels and spirits and felt he had received a divine message to use them. Crowley had successfully used the 19th Key or Call, the most difficult, to access two of the 30 aethyrs or aires (levels or planes) of expanded consciousness. He decided to access the remaining 28 aethyrs.

Crowley and Neuberg went out into the desert to a mount and ascended it. To make the Call, Crowley held a vermilion-painted Calvary Cross with an engraved topaz set in its axis. The topaz was engraved with a rose of 49 petals. When his clairvoyant visions unfolded, Crowley dictated to Neuberg. They performed one aethyr a day, except for one day when they two performed. They started with the last-numbered aethyr and worked backward toward the first.

Most of Crowley’s visions were apocalyptic in nature. In the 15th aethyr, he underwent an initiation to the magical grade of Master of the Temple, a title that could be fully realized only by accessing the other aethyrs. However, Crowley experienced great difficulty in trying to access the next, the 14th aethyr. After making several attempts, he stopped.

He and Neuberg were on their way down the mount when Crowley suddenly was seized with the inspiration to perform a homosexual magic ritual with Neuberg and dedicate it to the Greek god of nature, Pan. They went back to the top of the mount, inscribed in the sand a magic circle protected with names and words of power, and made a crude stone altar. Crowley took the submissive role in the sexual act as a way of eliminating ego. The ritual marked a turning point for him in his view of the importance of sex in magic; he now saw it as a beneficial sacrament.
The ritual also led to a breakthrough in consciousness, for later that evening, Crowley gained access to the 14th aethyr. In his vision, he was informed that in order to attain his cherished goal of becoming a Secret Chief and Master of the Temple, he had to undergo the complete death of his ego and unite his spirit with the ocean of infinity. Only this way, could he cross the Abyss, the gulf that separates ordinary mortals from the Secret Chiefs.

Crowley was able to resume his explorations of the other aethyrs, where he received revelation after revelation, laden with symbolism. In the 11th aethyr, he was told that in the 10th aethyr he would have to make a conscious crossing of the Abyss, inhabited by a single entity, the Demon Choronzon, the “first and deadliest of all the powers of evil,” a being composed of “complete negation.”

The ritual for crossing the Abyss took place on December 6, 1909, outside the town of Bou Saada. Crowley and Neuberg walked out into the desert until they found a valley that had a suitable floor of fine sand. They formed a circle of rocks, drew around it a magic circle, and then drew a magic triangle. The Demon would be invoked into the triangle. The circle would protect Neuberg, who would sit within it, armed with a magical knife and a notebook for recording what happened. Crowley intended to enter the triangle, a dangerous act for a magician. He thus became perhaps the first magician in the Western magical tradition to offer his own body ritually as a vehicle for manifestation of a Demon.

Before the start of the ritual, Neuberg took an oath that he would defend the magic circle “with thoughts and words and deeds” and would use the knife to attack anything that entered it, even Crowley.

Crowley apparently was not in the triangle when he invoked the aethyr, but was in a “secret place” out of the sight and hearing of Neuberg. After the invocation, Crowley entered the triangle. To help the Demon materialize, he sacrificed three pigeons at the points of the triangle and sprinkled their Blood. He took care not to let a drop fall outside the triangle, for that would enable Choronzon to manifest in the universe. When all the blood had soaked into the sand, he secretly recited the Call of the aethyr. He was in full trance.

Neuberg records that he heard a voice, simulating Crowley’s voice, call out barbarous names and then blasphemies. Visions appeared within the triangle. First, Neuberg saw the form of a woman prostitute he had known in Paris. The “woman” tried to seduce him, but Neuberg resisted, figuring it was Choronzon in a shape-shifted form. The “woman” then offered submission, which he also rejected. The Demon next turned into an old man, then a Serpent, and then into Crowley, who begged for water. Neuberg held fast within the circle. Neuberg ordered Choronzon to declare his nature. The Demon replied that he spat upon the name of the Most High. He was Master of the Triangle, who had no fear of the pentagram. He gave Neuberg words that the magician took as “great secrets of magic” but turned out to be worthless, a joke played by the Demon. Neuberg invoked Aiwass. Choronzon said that he knew the name of the angel and that “all thy dealings with him are but a cloak for thy filthy sorceries.”

Ordered again to declare his true nature, Choronzon said his name was Dispersion and he could not be bested in argument. He uttered a rapid string of blasphemies that taxed Neuberg’s ability to record. While distracting the magician with blasphemies, Choronzon threw sand onto the magic circle. When the outline was sufficiently blurred, he took the form of a naked man and leaped into it, throwing Neuberg to the ground. The two fought furiously. The Demon tried to tear out Neuberg’s throat with his froth-covered fangs. At last, Neuberg was able to force Choronzon back into the triangle, and he repaired the magic circle.

Man and Demon argued. Choronzon threatened Neuberg with all the tortures of Hell, and Neuberg denounced the Demon as a liar. After a long time at this, the Demon suddenly vanished, leaving Crowley alone in the circle. Crowley traced the word Babalon in the sand, and the ritual was over. He and Neuberg built a fire for purification and ritually destroyed the circle and triangle. Neuberg maintained that he had literally wrestled with Choronzon, and not with Crowley possessed by the Demon. Some occultists have posited that Crowley somehow exuded an Ectoplasm that enabled the Demon to make a form tangible enough to fight with Neuberg. Another explanation advanced is that the entire experience was visionary. Whatever the truth, both Crowley and Neuberg felt that Crowley had beaten the Demon and achieved the status of Master of the Temple and Secret Chief. Crowley’s new vision of himself was as teacher and prophet who was to indoctrinate the world with the philosophy of The Book of the Law.

Associates of Crowley said the ritual permanently damaged him and that he was possessed by Choronzon for the rest of his life.

Choronzon is a Demon of Dispersions and of the Abyss, summoned in an Evocation by Aleister Crowley and VICTOR NEUBERG. The account of the evocation…

Enochian magic is a system of Magic involving communication with Angels and spirits and travel through various planes, or aethyrs, of consciousness. Enochian magic originated…

A magic triangle is in ceremonial Magic, an inscribed triangle into which a spirit or DEMON is evoked into physical appearance and is contained. The…