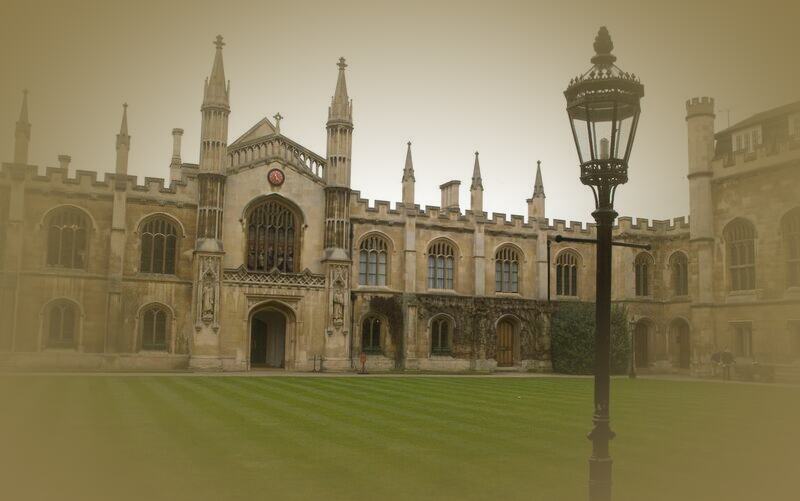 One ghost is Dr. Henry Butts, a master of the college from 1626 to 1632 and vice-chancellor during a severe outbreak of plague in 1630. His correspondence at the time indicates that he seemed to be under great stress. While many of his colleagues and students fled town during the plague outbreak, Butts remained behind to take care of the sick and dying. He felt deserted and harbored these feelings for years. He described himself as alone, destitute and forsaken by scholars within and outside the college.

The crushing blow for Butts came in 1632, when King Charles I and Queen Henrietta Maria visited Cambridge. According to custom, a play was staged whenever royalty came. Butts and Dr. Thomas Comber, master of Trinity College, disagreed over which play should be staged, and so two plays were put on. The one sponsored by Comber was a success, and the one sponsored by Butts was a failure—it was even booed by the audience.

Ten days after this humiliation, Butts was scheduled to preach before the college on Easter Sunday. He failed to appear and was found in his rooms in the master’s lodge, hanging by his garters with his knees dragging on the ground. His ghost subsequently began to be reported on college grounds.

The second ghost is James Betts, a student who was in love with Elizabeth Spencer, the 16-year-old daughter and only child of Dr. James Spencer, the master of Corpus Christi College from 1667 to 1693. Spencer did not like Betts, which forced the young lovers to have clandestine meetings. According to lore, one day Betts was with Elizabeth in her house when Spencer came home unexpectedly. He hid in a cupboard that, unbeknownst to him, could only be opened by a secret spring on the outside.

Spencer may have suspected Betts was there for, oddly, he ordered Elizabeth to pack up and depart immediately with him on a trip away from Cambridge. Betts died in the cupboard. Heartbroken, Elizabeth died a year later. Some years later, another college master found a skeleton inside the cupboard.

Haunting phenomena have included loud bangs and violent Rapping, and the specter of a long-haired man leaning out a dormer window at the top of the Old Lodge. The apparition of a man, sometimes visible from the knees up (probably the ghost of Butts), was reported numerous times in various locations.

In 1904, a student who was living in the rooms opposite those where Butts died saw what later was believed to be Butts’s ghost. One afternoon near Easter, the student suddenly became uneasy. He looked out his window and saw a man with long hair leaning out of an upper window in the opposite rooms. Only the man’s head and shoulders were visible. He stared at the student for several minutes. He seemed hostile.

The student ran upstairs to get a better view of the man, but when he reached the window, the man was gone. The student went across the court but found the rooms locked. Later he found out that the resident of the rooms had been out all afternoon, and the room had remained locked.

The manifestations of the long-haired man continued. Sometime later, a group of six undergraduates decided to attempt an Exorcism. They entered the haunted rooms, recited the Lord’s Prayer and summoned the ghost to appear. The rooms’ occupant and an onlooker from another college who was interested in Spiritualism said they saw a mistiness in the air that gradually took on the form of a man in white with a gash across his neck. No one else saw an apparition, though everyone claimed to feel a sudden chill in the air.

The two men who saw the ghost held out a crucifix and approached it. An invisible force drove them back, they said, and they became so upset that the exorcism was terminated.

The group tried another exorcism several days later. Again, the same two men saw the white figure and were repelled by an invisible force. The others still saw nothing but felt an unexplained stiffness in their limbs. They were unable to banish the ghost. The publicity prompted practical jokes such as students dressed in sheets.
At some later time, the rooms were closed off.

Peterhouse College Oldest college in Cambridge, England, dating to the 13th century, and site of widely publicized Hauntings that involved ExorcismS. In April 1997, a…

My mother suffers from an enlarged heart, along with several blockages. Due to the poor condition of her heart, after suffering three heart attacks and…

In the first volume of Dreams, “Evolution,” and Value Fulfillment, Seth presented an in-depth picture of the origin of all life — from the inner…