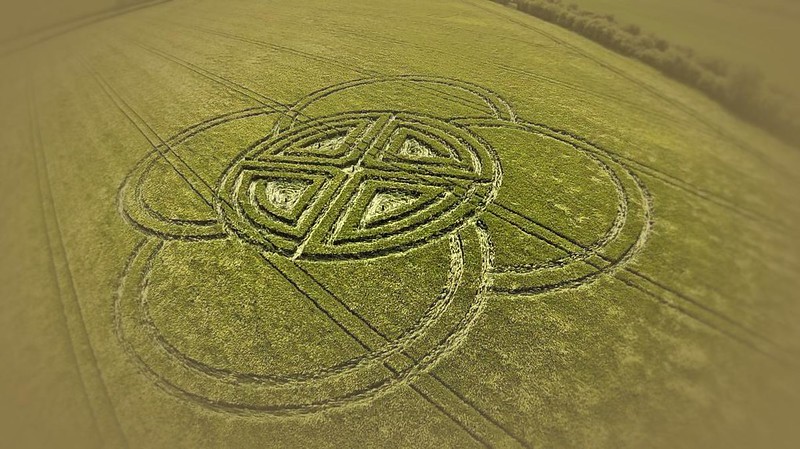 Mysterious nonhuman intelligences are leaving strange geometric designs in fields of cereal crops around the world. Whoever unlocks the key to these bizarre circular markings will discover if the unknown artists are here to help or to hinder humankind. Strange geometric designs have appeared in stands of cereal crops around the world, even in the rice paddies of Japan. The designs are often hundreds of feet in width and length and may cover many acres.

Controversy rages over how these “crop circles,” as they are generally known, originate, as they are usually formed overnight and involve downed, not cut, swaths of grain stalks. Although many people believe crop circles are a comparatively recent UFO-related phenomenon that began in the late 1970s or early 1980s,the mystery is hundreds of years old.

Unexplained geometric designs occurred in fields of wheat and corn in Scotland in 1678, and rural residents of England speak of the “corn fairies” that made similar designs in the fields in the late 1800s. Researchers have discovered accounts of the discovery of so-called fairy circles in fields and meadows dating back to medieval times throughout the British Isles, Germany,Scandinavia,and France. Recent evidence indicates that Chinese farmers found crop circles as much as three thousand years ago.

In those cases of crop circles that have appeared since the 1980s,investigators have determined that the crops were biochemically or biophysically altered. Cerealogists (experts in this bizarre field of research) state that since 1989 there have been in excess of two hundred formations in the UK each year. The so-called golden years of crop circle appearances seem to have been 1990 and 1991, in each of which there were between three hundred and four hundred formations.

In 1991 Doug Bower and Dave Chorley, two retired artists in England, confessed that they were responsible for making the crop circles that had baffled the world for so long and that they accomplished the most intricate of designs by using a simple board pulled by a length of rope. While the confession of Bower and Chorley satisfied a good many skeptics and journalists, serious crop circle researchers asked how these two elderly gentlemen could have accomplished their hoaxes throughout the world in such great numbers.

While admitting that there have been hoaxes, cerealogists point out that pranksters have been unable to create crop circles with the same precision and undisturbed nature as those thought to be of alien or unknown origin. Some suggest pranksters and tricksters far older than the retired artists as the perpetrators of the enigma. Why deviate, they ask, from the suspects who were originally named as culprits?

The creators of the crop circles might be found among that group of beings commonly called fairies, elves, or devas—entities that have played a significant role in the myths and legends of every planetary culture for centuries. Regardless of general dismissal of the crop circle phenomenon by conventional scientists, it would appear that there is a genuine mystery in the formation of many of the incredible designs that suddenly appear in fields around the world. Four principal theories regarding the origins of crop circles are the following:

1. extraterrestrial entities offering clues to their identity and intentions toward earthlings;
2. natural phenomena, ranging from insects to lightning, from plasma vortices (a kind of ball lightning) to electromagnetic anomalies;
3. hoaxers, such as the duo of Doug and Dave;
4. an ancient nonhuman intelligence indigenous to this planet that is utilizing archetypal designs in order to warn contemporary humankind to be more responsible and more respectful toward Mother Earth.

Various scholars have focused on the fourth possibility and suggested that many of the designs appear to be bound by the laws of sacred geometry. Sacred geometry, these experts state, embodies harmonic waves of energy and universal proportions. Some mysterious intelligence could be attempting to communicate geometrical and proportional wave forms—veritable keys to the cosmos and symbols of the archetypal world.

The English researcher Lucy Pringle believes that many crop circle formations are due to natural causes, such as the discharge of some electromagnetic energy, but she also notes that a particular design formed around April 21, 1998, appeared very close to the prehistoric mound of Silbury Hill. She likened the double-ringed circle with thirty-three scroll-like bands between the rings to a Beltane wheel, an ancient symbol used at Celtic fire festivals on May Day.

In July 2002 a three-day conference of leading crop circle investigators was held in Somerset, England. Andy Thomas, an organizer of the meeting, commented that his eleven years investigating the enigma had convinced him of one thing—that not all the circles were made by pranksters. Other than that, he stated, it was hard to say whether the phenomenon was caused by extraterrestrials, some kind of superconsciousness, collective psychokinesis (mind over matter), natural forces, or some other thing currently beyond human awareness.

Most cerealogists in attendance insisted that it is relatively easy to tell the difference between circles made by hoaxers and those made by what appears to be some kind of superior intelligence. The first crop circle of 2005 appeared in the Netherlands, and cerealogists predicted that the strangely designed circles would soon be manifesting primarily outside the United Kingdom, the nation previously most associated with the phenomenon.

From :Conspiracies and Secret Societies : The Complete Dossier – by Brad Steiger and Sherry Steiger

To read more about Crop Circles click on the next page