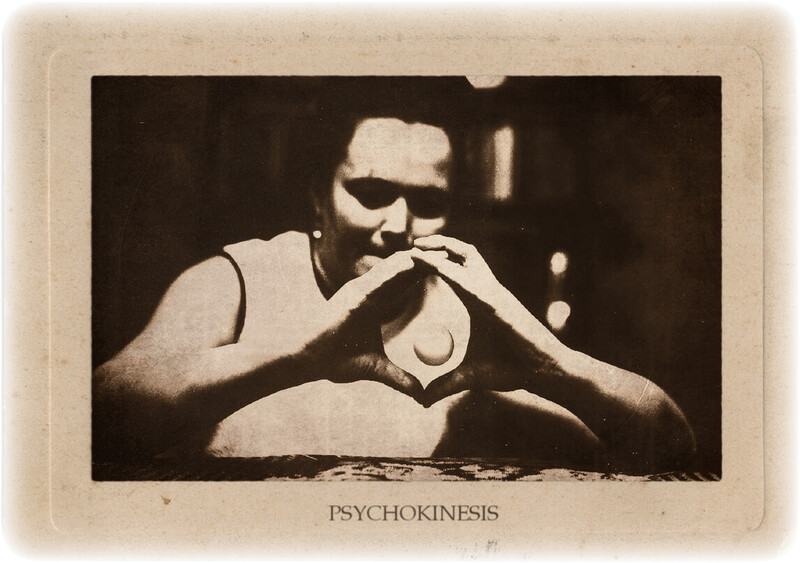 Psychokinesis (PK) is the mind’s ability to affect the external world, often referred to as “mind over matter.” Psychokinesis, or PK, can occur either spontaneously or through an apparent projection of will.

PK has been recorded since ancient times in descriptions of the feats of holy men and wizards, including Levitation, miraculous healing, invisibility, luminosity, Apports, and the movement of objects without visible cause. The Evil Eye, a widespread folk belief that certain individuals can harm and kill with a glance, is a form of PK.

In physical Mediumship, PK is responsible for Rapping, Table-Tilting,Levitation, apports and asports, Ectoplasm, Materializations, the unattended playing of musical instruments, direct writing, and psychic photography. Poltergeist cases involve extensive PK, such as the movement of objects and the malfunctioning of equipment. Psychic healing also involves PK, operating on biological systems rather than the material world.

Such feats have often been attributed to the action of spirits, but research has shown that living persons can duplicate them, either intentionally or unintentionally. The replication of the PK phenomena of physical mediumship is the goal of Sitter Groups. Some Poltergeist cases are considered to be the work of living agents; since the PK in these cases is repetitive, it is termed “recurrent spontaneous psychokinesis,” or RSPK.

Early psychical researchers, such as members of the Society for Psychical Research (SPR), studied ostensible PK at Séances with physical Mediums and uncovered much fraud. This led to a decline of interest in largescale PK effects, although there continued to be reports of great physical mediums like Eusapia Palladino and the Schneider Brothers. In the 1930s, however, PK research moved into the laboratory.

J.B. Rhine made famous controlled PK tests in which subjects attempted to influence the outcome of tossed dice. Today the typical laboratory investigation is computerized, with subjects trying to influence of the outcomes of random number generators (RNGs) and random event generators (REGs). The difference between this class of PK effects and the classic variety has led to the distinction between micro-PK and macro-PK. Micro-PK involves weak or slight effects not visible to the naked eye and requiring statistical evaluation, such as, besides RNG and REG outcomes, changes in temperatures, magnetic fields or the molecular content of water. Macro-PK refers to large-scale, observable phenomena.

PK is considered by modern parapsychologists to be very closely related to extrasensory perception (ESP). From his tests, Rhine concluded that ESP and PK need and depend on each other. The impossibility of conceptually separating the two processes in many instances led researchers to invent the term “psi” to refer to the action of either ESP or PK, or both. Drugs, emotions, attitudes toward the paranormal and altered states such as hypnosis can affect psi performance in laboratory tests, for better or worse.

The impact of PK on our everyday world may be much more pervasive than we realize. Through PK, our consciousness may directly affect the constitution of our reality on a quantum level.

Someone who receives or imparts information without using the five senses— taste, touch, sight, sound, and smell—is said to have extrasensory perception (ESP). Parapsychologists (people…

Masterminded by sceptic James Randi, Project Alpha was the code name for an experiment—or some would say a hoax—to see whether psychical researchers could be…

TELEKINESIS is the spontaneous movement of objects and people through the air without any physical intervention. These objects are either moved through paranormal means, like…

Psychic healing is the process of curing another person’s illness by concentrating one’s thoughts on the disorder. Some parapsychologists believe that psychic healing involves the…