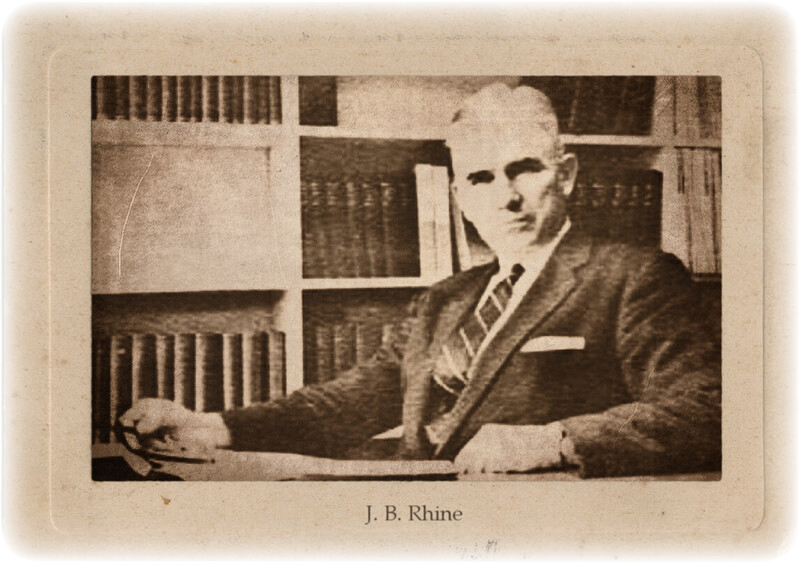 J(oseph) B(anks) Rhine (1895–1980) Founder and director of the Parapsychology Laboratory at Duke University, often called the father of modern parapsychology (experimental psychical research). He believed that the limits of Extrasensory Perception would have to be established before any meaningful work could be done on the problem of Survival After Death, but he never lost a personal interest in the latter.

J. B. Rhine was born on September 29, 1895, in a log house in the Pennsylvania mountains. From his childhood he heard many stories of omens, warnings and messages from unseen agencies, although his sceptical father taught him to dismiss them as so much superstitious nonsense. When he was about 12, Rhine had a religious experience and decided on a life in the ministry; he held this determination until he met Louisa Ella Weckesser, his future wife, whose critical attitude to religion gradually brought him to question his faith.

Rhine served in the Marines from 1917 to 1919. He and Louisa Weckesser were married in 1920. Rhine began to study biology and plant physiology, preparing for a career in forestry. He received his Ph.D. in botany from the University of Chicago in 1925; LOUISA RHINE had received her Ph.D. in the same subject from the same institution two years earlier. But Rhine did not find botany satisfying; more and more his mind turned to psychic experiences. The Rhines had heard Sir Arthur Conan Doyle lecture in Chicago in 1922, and his claim to be in touch with his deceased son made Rhine wonder whether psychical research might provide a way of establishing proof of a nonphysical world.

Rhine joined the American Society for Psychical Research (ASPR) in 1924 and in 1925 began to abstract foreign-language publications for the ASPR’s Journal. The Journal at this time was under the editorship of J. Malcolm Bird and was printing many stories of the Boston medium “Margery” (see Mina Crandon Stinson). Rhine was enough impressed by what he read to want to conduct his own research with Crandon. Boston was across the river from Cambridge and Harvard, where William McDougall, a prominent figure in psychical research, then taught. It was partly with the idea of studying under McDougall and partly with the idea of investigating Crandon that the Rhines left Morgantown in June 1926 and moved to Boston.

On July 1 the Rhines had a sitting with Crandon which left Rhine badly disillusioned. He had seen the medium kick a megaphone within reach of her hand in the dark, and when he checked a balance after the Séance he found that the weight had been moved so that the “wrong” side would go down. He quickly wrote to the ASPR about what he had seen; later he resigned his membership in the society.

The Rhines had based their decision to leave Morgantown partly on a belief in Bird’s presentation of the mediumship, Louisa Rhine wrote in Something Hidden (1983), her book on their life together, but now suddenly everything was up in the air. They had reached Cambridge to find McDougall leaving for sabbatical, and the Crandon mediumship had turned out to be a fraud. Fortunately, there was Walter Franklin Prince at the Boston Society for Psychic Research.

Prince had left his position as research officer with the ASPR partly because he, too, was sceptical of the Crandon Mediumship. He arranged for the Rhines to have sittings with a mental Medium, Minnie Meserve Soule, on behalf of a Detroit school administrator, JOHN F. THOMAS, who was working on his doctorate under McDougall. Thomas, in turn, arranged for the Rhines to go to Duke University in the fall of 1927 to assist him in his data analysis. Duke had hired McDougall away from Harvard after his sabbatical.

Rhine at first worked as a research assistant to McDougall as well as Thomas. He stayed on to teach psychology after Thomas received his Ph.D. (the first awarded in parapsychology by an American university), and in the fall of 1930 he and McDougall, along with others in the psychology department, began the ESP experiments that would make the Parapsychology Laboratory world famous. The association with Prince now had another benefit—Prince edited and the Boston Society published Rhine’s monograph Extra-Sensory Perception (1934), in which he reported the results of those early experiments.

The Soule sittings they had conducted for Thomas had been interesting, but the Rhines disagreed with Thomas over their interpretation. Thomas believed that these and other of his Séance communications were genuine messages from his deceased wife, whereas the Rhines thought they could be explained on the basis of the medium’s ESP. The debate was an old one, going back to the beginnings of the Society for Psychical Research (SPR) in London in 1882.

But Rhine had not lost his personal interest in the survival problem. In a series of popular books and lectures, as well as Scientific papers and editorials published in the Journal of Parapsychology, which he founded at Duke in 1937, he was quick to point out that ESP supported a dualistic separation of body and mind. And if body and mind were separate, then in theory the mind should be able to survive the body’s death. Until the limits of ESP were established, however, he believed there was no Scientific way of pursuing the survival problem.

The Parapsychology Laboratory continued in operation at Duke until Rhine’s retirement in 1965, when he moved it off campus to the new Foundation for Research on the Nature of Man, where it is still in existence. Rhine died on February 20, 1980, at his home in Hillsborough, North Carolina.

RHINE, J B (1895–1980)
Considered by many to be the father of parapsychology, the scientific study of psi and paranormal abilities such as
clairvoyance and telepathy, Rhine was co-founder of the revolutionary Parapsychology Laboratory at Duke University in Durham, North Carolina.

Rhine was born on 29 September 1895 in a log house in the Pennsylvania Mountains. In 1920 he married Louisa Ella
Weckesser and in 1925 he received his PhD in botany from the University of Chicago. But Rhine did not find botany fulfilling and more and more his interest turned towards the paranormal. He joined the American Society for Psychical Research and began to work for the Society’s Journal.

In 1926 Rhine moved to Boston, where he investigated spiritualist mediumship with William McDougall and Walter Franklin Prince, two prominent figures in psychical research. Initial investigation proved disappointing when a sitting with Mina Crandon turned out to be a fraud, but later sittings with Minnie Meserve Soule proved to be more encouraging. When it came to interpreting the Soule sittings there was disagreement as to whether the séance communications were genuine messages from the dead or whether they could be explained on the basis of the medium’s extrasensory perception (ESP); Rhine favoured the later interpretation.

In the fall of 1927 Rhine went to Duke University to assist McDougall in his data analysis. Encouraged by McDougall he set up a programme of statistical validation of ESP, with emphasis initially on clairvoyance and telepathy using Zener cards as test cards. The ESP experiments that followed would make the Parapsychology Laboratory at Duke University world famous.

The parapsychology unit continued to operate at Duke University until Rhine retired in 1965 and moved it off campus to the new Foundation for Research on the Nature of Man (later the Rhine Research Center), where it is still in existence. Rhine died on 20 February 1980. His best-selling books include New Frontiers of the Mind (1937), The Reach of the Mind (1947) and New World of the Mind (1953).

Louisa Ella Weckesser Rhine (1891–1983) was an American parapsychologist, wife and professional partner of J.B. Rhine. Unlike her husband, who became famous for his experimental…

William McDougall (1871–1938) was a psychologist best remembered for his support for the Lamarckian theory of inheritance; also a strong proponent of Psychical Research and…

Gardner Murphy (1895- 1979) Eminent psychologist and psychical researcher, often compared to William James in his academic stature and range of interests. As with James…