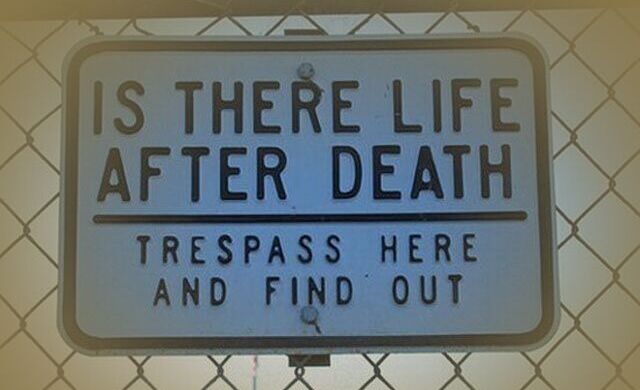 survival after death The belief that a spiritual aspect of the human being survives the destruction of the physical body is a feature of all religious traditions, with the exception of classical Buddhism, which denies the existence of the soul. For spiritualists, belief in survival rests not on faith, but on manifestations of discarnate spirits, such as in Mediumship. An unquiet relationship exists between Spiritualism and Psychical Research, the Scientific field under the purview of which the “survival question” falls. Many psychical researchers do not accept survival as proven, but hold that the evidence can be explained more satisfactorily in terms of ESP among living persons. In addition to mediumistic communications, Out-of-Body Experiences and Near-Death-Experiences, as well as Apparitions, Hauntings, and Poltergeists, bear on the problem of survival.

Belief in survival is found not only in the great religious traditions; it is also a tenet of the animism characteristic of tribal societies in the Americas, Africa, Asia, and Australia. According to anthropologist E. B. Tylor, belief in the persistence of the human spirit indefinitely after death once existed alongside beliefs in Reincarnation. Animis tic ideas about Reincarnation evolved into those of Hinduism, Buddhism, and their offshoots and may have been the basis of the Christian idea of resurrection. Tylor portrayed animistic soul beliefs as being grounded in experiences such as apparitions, mediumistic trances, and dreams in which one seemed to travel out of one’s body and meet other human figures, much in the manner of the modern spiritualist. Indeed, Tylor recognized a direct link between animism and spiritualism.

Thus, belief in survival after death in one form or another is found among almost all of the world’s peoples, and seems to stretch far back in time. The tendency to disbelieve in survival on the ground that it cannot be Scientifically “proven” may be traced to the European Enlightenment of the 18th century. Nineteenth-century spiritualism, with its appeal to “Scientific” Demonstrations, was a direct reaction to this way of thinking and an attempt to counter it in its own terms.

By the end of the 19th century, spiritualism claimed millions of adherents, on both sides of the Atlantic, and had led to attempts to verify its claims (the Society for Psychical Research (SPR) [SPR] was founded in 1882, the American Society for Psychical Research (SPR)[ASPR] three years later). Early psychical researchers, however, encountered much trickery and concluded that there was little substance in the spiritualist claims. Moreover, apparitions seemed to many to be explicable as telepathically inspired hallucinations. The psychical research societies were not founded to study the survival problem, as is commonly believed, but to determine what basis there might be for ESP.

Interest soon shifted to survival, however, with the discovery of Leonora Piper. Piper was a different sort of medium than that usually encountered in the spiritualism of the day; rather than producing physical phenomena, such as table Levitations and materializations of objects, she went into trance and seemed to deliver verbal messages from deceased persons. Piper worked closely with the SPR and ASPR throughout her career, and her mediumship was responsible for converting several (e.g., Richard Hodgson, James H. Hyslop, Sir Oliver Lodge) to a belief in survival. After Piper, similar “mental mediums” were found and studied, among them Eileen J. Garrett and Gladys Osborne Leonard.

The importance of trance communications from mediums such as Piper, Leonard and Garrett was that they provided information that could be checked against the written sources and the memories of living persons. Establishing the paranormal basis of their knowledge then depended on showing that they had not, or could not, have received their information normally (if fraudulently), such as by reading up on their sitters ahead of time. Even when a paranormal source was indicated, however, it was possible that a medium’s information had come not from discarnate spirits, but from living minds or physical sources through ESP.

Various attempts were made to control mediumistic ESP, including the use of “proxy sitters,” stand-ins for persons seeking to communicate with deceased persons, who knew as little as possible about the object of the sittings. Special attention was given to Drop-in Communicators, about whom neither the Medium nor the sitters knew anything. Particular value is attached to Cross Correspondences, the meaning of which was apparent only by taking in conjunction messages received through two or more different mediums, and which therefore implied some directing intelligence behind them. Nevertheless, ESP could in theory be stretched to cover the evidence from even these special classes (see Super-PSI), and increasing awareness of this gradually led to a decline in survival research, in favour of experiments to establish the limits of ESP. This movement, which continues today, received its greatest impetus from the work of J.B. Rhine.

Better evidence for physical mediumship began to appear around the turn of the century as well. The medium most responsible for the change of opinion was Eusapia Palladino. Palladino’s mediumship was similar to that of D.D. Home, the only famous 19th-century medium of whom no good reason for fraud was ever alleged. Careful studies in laboratory settings were later conducted with the Schneider Brothers. Materialization phenomena were reported in association with the Schneiders and with Marthe Beraud (“Eva C.”) and by William Jackson Crawford and THOMAS HAMILTON. Although Crawford and Hamilton accepted the spiritualist hypothesis that discarnate spirits were responsible for these phenomena, most other researchers believed that they were produced by the mediums themselves, unconsciously, via psychokinesis.

The latter explanation is the one favoured by most psychical researchers today. Psychokinesis has also been suggested to explain many poltergeist outbreaks, in which objects move or fly about without contact. Poltergeists often center around a particular person, whom many researchers consider to be the “agent” responsible for their production. Many poltergeist agents are preadolescent children, a circumstance that has led skeptics to suspect trickery—as has indeed been Demonstrated in some cases. In those cases involving paranormal activity, hormonal changes around the time of puberty are often implicated. In the case of Eleanore Zugun, a series of striking phenomena ceased almost overnight when menstruation began. The agents in a few poltergeist cases appear to be deceased persons, but these are relatively rare. Such cases may also be cases of haunting.

The evidence for survival from out-of-body and neardeath experiences is more tenuous, and the most that can be said about these is that they are not incompatible with the survival hypothesis. If conscious awareness can exist apart from the body during life, then it could in principle survive death as well.

Although mediumship, apparitions, poltergeists, and out-of-body and near-death experiences typically are discussed separately, many actual cases cannot be so simply classified. In reciprocal apparitions, for instance, the agent has an apparent out-of-body experience during which he or she seems to travel to a distant place, where he or she is perceived as an apparition. The Wilmot Apparition is an especially complex case of this type, involving also a dream vision of the agent. Mediumship and apparitions are less commonly associated, unless materialization phenomena are to be understood in this way. Nonetheless, there are cases of mediumistic communicators who appear as apparitions. Psychokinetic or poltergeist effects (e.g., rappings) are typical of physical mediumship. In the case of “Stella C.” (see Dorothy Stella Cranshaw) poltergeist phenomena turned out to be associated with an unsuspected mediumistic capability.

Cases that involve more than one mode of experience strengthen the argument that can be made for survival on the basis of each type taken separately. It is much easier to conceive of a discarnate spirit that appears as an apparition, acts upon the world as a poltergeist, and communicates through a medium, than it is to imagine how all these things could be produced simultaneously through ESP and psychokinesis by living persons. Good evidence for survival also comes from those cases in which the agent seems to have a special reason, or intention, to communicate, or in which the agent conveys information unknown to the sitter (in a case of mediumship) or the percipient (in an apparition case). In the Chaffin Will Case, an apparition indicates the place where a second will is hidden.

Informed skeptics of the survival hypothesis point to many inconsistencies in the data, and to problem cases such as those of fictitious or living communicators. One communicator through Piper identified herself as the author George Eliot but claimed she had met Adam Bede, actually a character in one of her novels, in the afterworld. In another famous case, a communicator who presented himself as deceased turned out to be very much alive. Cases in which it seems probable that the information came from the sitter via ESP are not uncommon, and there are a few cases in which the apparent ESP link was not with the sitter, but with someone the sitter knew. In one such case, a medium described in great detail images that were in the mind of a person the sitter had visited on the way to the Séance, but which had not been communicated verbally.

If survival of death is a fact, it is clear that the process of mediumistic communication and the perception of apparitions are complex activities. At a minimum, the data seem to call for an interaction between the agent and the medium or percipient that would allow the information to be fi ltered and modifi ed by the latter at an unconscious level before coming to conscious awareness. Ideas along these lines have been suggested by several researchers, including Frederic W.H. Myers, James H. Hyslop, and Hornell Hart. Such ideas presume the survival of personality in its entirety, and although philosophers have questioned whether the idea is coherent, it is at least theoretically possible that survival occurs only in a fragmentary way, as William G. Roll has suggested. Other theorists, such as Frederick Bligh Bond, believe that survival occurs only in the form of some type of celestial data bank. Animistic ideas are again different and involve such conceptions as multiple souls and spirits which undergo differentiation and division after death.

Spiritualism as a religious movement peaked during the late 19th century in both the United States and Europe, but spiritualist organizations and publications continue to this day. Spiritualism is particularly strong in Britain, where the College of Psychic Studies attracts many new members each year. In the United States, the popularity of Channeling suggests a belief in survival as well. Indeed, a Gallup poll taken in the early 1980s found that two-thirds of Americans believed in survival after death. There was little or no variation by sex, age, level of education, or religious affiliation. The tendency to doubt whether there is survival after death not only is modern, it is found among a minority of persons even in today’s society.

This work, first published in the 19th century, was the culmination of more than 20 years of research into the survival of consciousness after death.…

Psychical research has to proceed on scientific lines. The chief of the many problems that confront it is concerned with phenomena purporting to establish the…

soul The life-force of an individual, as distinguished from that person’s physical body. The concept of “soul” has been used in different ways in different…