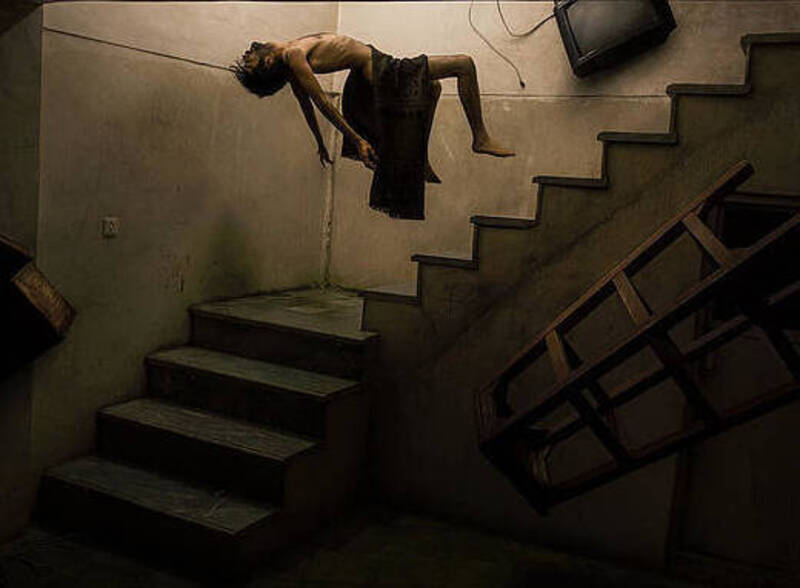 A poltergeist is a mischievous and sometimes malevolent spirit or unknown energy that is characterized by noises, moving objects, and physical disturbances. “Poltergeist” comes from the German words poltern, “to knock” and geist, “spirit.” Reports of poltergeist disturbances date back to ancient Roman times, appear in the medieval records of Germany, China and Wales, and continue to be reported from countries around the world. Poltergeists have been studied extensively by psychical researchers and parapsychologists since the 1890s.

Various theories have been advanced to explain them. In earlier times, reports of poltergeist disturbances cite primarily rock- and dirt-throwing, flying objects, loud noises, strange lights, and other Apparitions, terrible smells, Rapping, physical and sexual assaults, and shrieks. Modern disturbances include these plus hightech antics such as lightbulbs spinning in their sockets and telephones repeatedly dialing certain numbers.

Physical assaults—bitings, spittings, pinchings, punchings and sexual molestations—continue to be reported in a small percentage of cases. Poltergeist activity usually starts and stops suddenly. It may last from a few hours to years but rarely lasts longer than a few months. Activity rarely takes place when no one is at home and usually occurs when a particular individual, or agent, is present.

In the late 1970s, English researchers Alan Gauld and A. D. Cornell made a computer analysis of 500 poltergeist cases collected from around the world since 1800. They found 63 general characteristics, such as 24% of poltergeist incidents lasted longer than a year; 58% were most active at night; 48% included rapping sounds; 64% involved the movement of small objects—by far the most common phenomenon; 36% involved the movement of large pieces of furniture; and 12% were characterized by the opening and shutting of doors and windows.

In those cases where there was an apparent agent, a person who was the focus of the activity, it was most often female and under the age of 20 years; 16% of the cases indicated active communication between poltergeist and agent. Up to about the 19th century, poltergeist activities were routinely blamed on the devil, Demons, witches and the ghosts of the dead. Beginning in the 19th century, poltergeist activities were associated with the physical mediums of Spiritualism, who allowed themselves to become temporarily possessed by the spirits of the dead.

In more modern times, poltergeists are widely believed to be an involuntary or unconscious type of Psychokinesis (PK) on the part of the living, the so-called agent. The agent is believed to exercise unconscious thought processes that produce the disturbance. Nandor Fodor was among the first to pursue this theory in his investigations in the 1930s; his conclusions were controversial. Of 500 cases since 1800 analyzed by Gauld and Cornell, only 7 per cent were blamed on witchcraft, and 2 per cent on Demons.

Demonic cases resemble Possession and are characterized by a seemingly intelligent and malevolent being. Gauld and Cornell noted that in such cases, the supposedly intelligent being does not announce itself as a Demon, nor is there any clear evidence to prove a Demonic presence. Such cases seem to be a matter of interpretation on the part of the victims, who, believing they are haunted by Demons, call in clergy for exorcisms, which reinforce their belief. Beliefs about Demon- and witchcraft-caused poltergeists are more common in non-European U.S. cultures; exorcisms are the typical cures.

Nine per cent of the Gauld-Cornell cases were attributed to the spirits of the dead. The most common manifestation was a code of Rapping and scratches, which were common in mediumistic communications with the dead during the peak of Spiritualism. Perhaps the first scientist credited with taking poltergeists seriously was Robert Boyle, a 17th-century British physicist and chemist.

Boyle met a Protestant minister, Francis Perrault, while on a visit to Geneva. Perrault told him about strange, inexplicable noises and movements of objects that occurred at his home in France. Perrault published his story about “the devil in Mascon” at Boyle’s suggestion, and it may be the first detailed account of a poltergeist. An early investigator was Sir William Barrett, a 19th-century physicist and one of the founders of the Society for Psychical Research (SPR), London.

Barrett personally witnessed poltergeist activity during visits to a home in Illustration of a Victorian English family beset by a poltergeist. Ireland where a widower and his five children lived. The centre of activity appeared to be focused on the 20-year-old daughter, but Barrett found that the poltergeist would respond to his mental requests for knocks. In four successive trials, Barrett silently asked the entity to knock a certain number of times, and each time it correctly complied.

A contemporary of Barrett, English psychical researcher Frederic W.H. Myers proposed that some poltergeist cases were genuine and noted that poltergeist phenomena seldom coincided with the phenomena of Hauntings. In the 1920s and 1930s, it was widely believed among researchers that sexual conflicts, especially during puberty, were the cause of poltergeists. While sexual tension may be a cause or factor in some cases, it cannot explain them all.

In the 1940s and 1950s, researchers theorized that poltergeists were the projections of repressed emotions, such as hostility and anger. Modern approaches to poltergeists were stimulated by the 1949 St. Louis Exorcism Case. This Demonic Possession case, which inspired William Peter Blatty’s best-selling novel and movie The Exorcist, came to the attention of J.B. Rhine at Duke University’s Parapsychology Laboratory.

Rhine was interested because he realized that many poltergeist phenomena could be conceptualized as large-scale PK, which he had begun to explore with dice tests in his laboratory. When a few years later word came of the SEAFORD Poltergeist, Rhine sent J.G. Pratt and William G. Roll to investigate. Roll went on to investigate several other cases, described in his 1972 book The Poltergeist, and later the Tina Resch case. Based on his personal observations and 47 reports published before 1958, Roll hypothesized that there were patterns involving “recurrent spontaneous psychokinesis” (RSPK), which is to say, PK occurring repeatedly in a natural setting, as opposed to the laboratory.

Since poltergeist activities often occurred repeatedly when a particular person was present, Roll suggested that the activities were expressions of unconscious PK on the part of the individual serving as the agent. He felt this applied to the Resch case too. Roll formulated the patterns into a profile. A child or teenager was usually at the centre of the activity. He or she harboured internal anger from some type of stressful situation in the household. PK was an unconscious way of expressing hostility without fear of punishment.

The individual was often completely unaware of the psychic energy causing the disturbances. Afterward, he or she experienced feelings of pleasure and happiness without knowing why. Also, Roll noted, agents are often in a poor state of health, either mentally or physically, and thus can be predisposed to stressful events. Indeed, some psychologists have found that several of their patients with unresolved emotional tensions were associated with, or lived in, houses where poltergeist activity had been reported.

Moreover, in studying the personalities of poltergeist agents, psychologists have found anxiety reactions, conversion hysteria, phobias, mania, obsessions, dissociative reactions and schizophrenia. In some cases, psychotherapy eliminates the poltergeist phenomena. Nonetheless, investigators have found numerous poltergeist cases in which the agent appears to be psychologically stable. Ian Stevenson, psychiatrist and parapsychologist, suggested that the possibility that poltergeists are the spirits of the dead has been too often overlooked. In studying a number of cases attributed to living agents and to dead agents, Stevenson noted some significant differences.

For example, living agent cases were characterized by meaningless raps; random movement of mostly light objects; short and simple trajectories; much breakage of objects; activities localized around a person, usually under 20; and relief of symptoms with psychotherapy. On the other hand, discarnate agent cases were characterized by purposeful movement of larger and heavier objects; complicated and long trajectories; little, if any, breakage; meaningful raps in answers to questions; sometimes localized around a person; and relief of symptoms with exorcism, placation or intercession.

Still another explanation, proposed by D. Scott Rogo, suggests that a poltergeist is activated by a stressful situation, but the agency is not PK from the living person. Rather, the living person projects some element of his or her own personality into the apparition-like form that is often witnessed. The form could become autonomous from the agent’s physical body and be the cause of the disturbances. Thus, the poltergeist might be some type of independent Apparition created or projected by the poltergeist agent.

After five decades of investigation and research, Cornell, a skeptic, concluded in his book Investigating the Paranormal (2002) that “poltergeist activity is far less indicative of intelligent communication than was thought to be the case. They are perhaps more often associated with a destructive juvenile or an unbalanced adult mind.” People blame discarnate entities because of the seemingly inexplicable nature and onsets of the disturbances, he said.

He observed that there are only two common denominators in poltergeist cases: “incidents of destructive physical effects which convey nothing of an intelligent nature nor represent any form of intelligible communication” and “the presence of human beings.” The disturbances are invariably person-centred rather than place-centred. The suggestion by some that disturbances might be the result of an unbalanced discarnate mind is “clutching at straws” to find a spirit connection.

While some phenomena are difficult to explain, Cornell notes that most investigated cases have revealed unconscious acts on the part of the agents or deliberate trickery. However, he said, until better controlled conditions are met in investigations, the issue of what causes disturbances and how they are created will remain clouded.

Other researchers side more with Stevenson’s views, that some cases are caused by spirit activity, either the dead or non-human entities.

To read another article about Poltergeists click on the next page