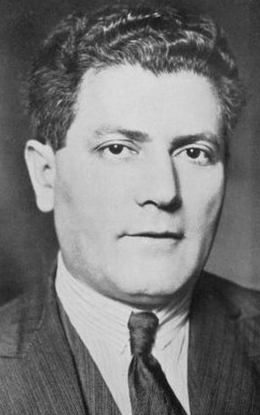 Nandor Fodor (1895–1964) was a journalist, lawyer, psychoanalyst and psychical researcher best known for his pioneering theories on the psychological and sexual aspects of Mediumship and Poltergeist phenomena. Some of his ideas were far ahead of his day, causing controversy and bringing him much criticism, especially from Spiritualists. His views were supported by subsequent research by others in later years.

Nandor Fodor was born on May 13, 1895 in Berengszasz, Hungary. He earned a law degree from the Royal Hungarian University of Science in Budapest in 1917. He also earned a doctorate. From 1917 to 1921 he worked as a law assistant. In 1922 he married Amarai Iren; the couple had a daughter.

From 1921 to 1928, Fodor worked as a journalist. One of his posts was staff reporter for the Amerikai Magyar Neszava (American Hungarian People’s Voice) based in New York. In the year of his arrival in New York, he discovered Hereward Carrington’s book Modern Psychic Phenomena (1919), which so intrigued him that he made psychical research his primary activity for the rest of his life.

Fodor used his position as a journalist to meet Carrington, who in turn introduced him to others prominent in psychical research, including Sir Arthur Conan Doyle. Fodor and Carrington became close friends, and Carrington served as an influential model for Fodor’s later psychical investigations.

A second major influence upon Fodor was his meeting of Sandor Ferenczi, a psychoanalyst and an associate of Sigmund Freud, whom Fodor interviewed in 1926. The meeting stimulated his interest in psychoanalysis. In his later research, Fodor would approach psychical phenomena from the viewpoint of a psychoanalyst.

In 1927, Fodor was introduced to the world of Spiritualism when he attended a Séance of William Cartheuser, a direct voice medium in New York. Fodor was overwhelmed to receive a message purportedly from his dead father. Cartheuser’s mediumship was questioned by some psychical researchers—in 1926, one of his allegedly dead communicators had been discovered to be alive after all— but the Séance reinforced Fodor’s interest in psychical phenomena. (He later became disillusioned with Cartheuser.)

In 1928, Lord Rothermere, the owner of a number of British newspapers, hired Fodor as a secretary to work with him on Hungarian projects. Fodor moved to London, where he worked for Rothermere until 1937.

In London, he became more involved in Spiritualism and psychical research, giving lectures and writing articles. In 1934 he became assistant editor of Light, the oldest British spiritualist journal, a post he held through 1935. He worked with the London Spiritual Alliance in conducting experiments with mediums.

The position afforded him the opportunity to conduct numerous investigations of Mediums, mediumistic phenomena, poltergeists and Hauntings. At about the same time, he renewed his interest in psychoanalysis, and began applying it to his research.

Prior to this, scant consideration had been given to emotional states and unconscious drives as causes or contributors to some psychical phenomena. Fodor’s views ignited controversies. Psychoanalysis itself, with its focus on sex, was not well regarded in Britain; also, many spiritualists resented the implication that the phenomena might have (at least in some cases) a natural, non-otherwordly explanation. What was more, Fodor found that research and analysis did not necessarily mix, due to their unique relationships with the subject/patient.

Nonetheless, Fodor’s work was profoundly influential, especially in his two most famous cases, the Ash Manor Ghost and the Thornton Heath Poltergeist. In the Ash Manor Ghost case, investigated beginning in 1936, Fodor determined that suppressed sexual energies apparently contributed to a haunting. In the Thornton Heath case, investigated beginning in 1938, a woman’s personal and emotional problems seemed to be at the root of poltergeist phenomena and alleged Vampire attacks.

Fodor came under severe attack from the spiritualists, especially for his Thornton Heath work, until he finally sued one spiritualist newspaper, Psychic News, for libel in 1938. J. Arthur Findlay, a Spiritualist and a founder and chairman of the International Institute for Psychical Research, resigned his post in protest of Fodor’s theories. Shortly after, Fodor was dismissed from his post as research officer.

Fodor responded to these attacks by stepping up his own criticism of mediumistic fraud. He was comforted by an encouraging letter from Freud, who read Fodor’s manuscript on the Thornton Heath case and stated, “I hold it very probable that your conclusions regarding this particular case are correct. . . .”

In 1939, Fodor won two of his four charges of libel, but he was awarded only minor monetary damages. He quit his role as London correspondent to the ASPR and returned to New York, where he became a successful psychoanalyst. He eventually became an editor of the Psychoanalytic Review, the oldest psychoanalytic journal in the United States, and served on the teaching staff of the Training Institute of the National Psychological Association for Psychoanalysis.

In the United States, Fodor found a more favourable attitude to his psychoanalytic approach to psychical research. He resumed his association with Carrington, and worked with Eileen J. Garrett, whom he had met previously in England. He wrote numerous articles for Garrett’s journal Tomorrow.

In his later years, Fodor came to believe that psychical research “has tried to be too Scientific for years and has gone bankrupt as a result.” Mediums do not function well if treated like guinea pigs, he said. He defended posthumous criticism of ghost-hunter Harry Price and psychical researcher Sir William Crookes.

Fodor died on May 17, 1964. He left a legacy of nine major books and numerous articles and essays. His most important work, An Encyclopedia of Psychic Science (1934), is a classic and is still regarded as one of the most important reference books in the field, providing an in-depth picture of psychical research from about the late 19th century to its year of publication. He compiled the encyclopedia after moving to London, spurred by his own need for a concise reference to assist him in his reading and research. The encyclopedia was reissued with corrections in 1966, and later was combined with Lewis Spence’s Encyclopedia of the Occult (1929) to become The Encyclopedia of Occultism and Parapsychology. Updated editions were edited by Leslie Shepard, and then by J. Gordon Melton. A fifth edition was released in 2004.