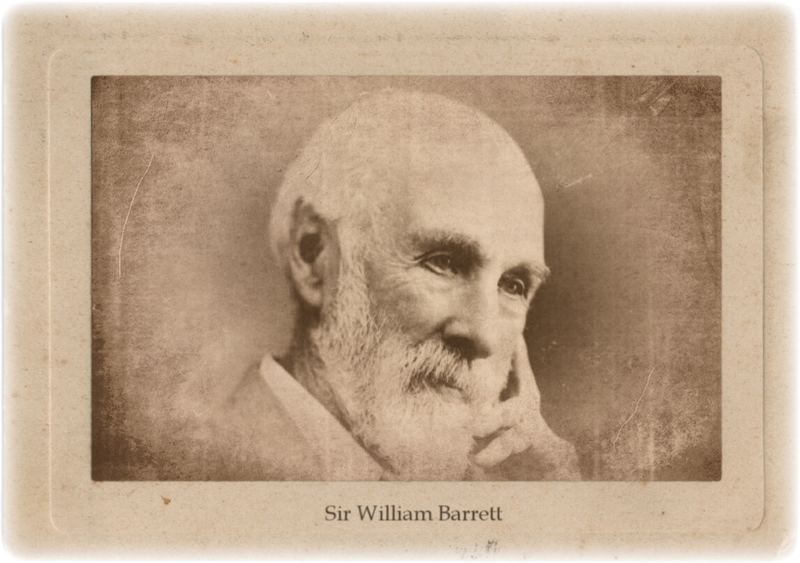 William Barrett was born on February 10, 1844, in Jamaica, British West Indies, the son of a clergyman. He attended a private boarding school in Manchester, England, where he distinguished himself by his aptitude for physics. At age 19, in 1862, he was hired as an assistant to physicist John Tyndall at the Royal Institution, in London. He left five years later to take up teaching positions, and in 1873 he was appointed to the chair in physics at the Royal College of Science, Dublin, where he stayed until his retirement in 1910.

Although he never attained the same stature as Sir William Crookes and Sir Oliver Lodge, other physicists involved in psychical research, Barrett is credited with some important accomplishments. He was the first to notice the contraction of nickel when magnetized, and he invented a silicon-iron alloy called stalloy, important to the commercial development of the telephone and in the construction of transformers, dynamos and other equipment related to electrical engineering. He was knighted in 1912.

Barrett’s first exposure to Psychical Research came while he was at the Royal Institution in the 1860s. Incredulous at what he heard about some ESP experiments conducted with subjects under hypnosis, he repeated the experiments with a different subject and found that “whatever sensations I felt, whether of touch, taste or smell, were transferred to the subject, and, moreover, ideas and words which I thought of were produced more or less accurately by the hypnotized subject.” A few years later, in 1874, he had his first experience with a Medium and became convinced of physical phenomena as well.

In 1876 Barrett submitted a report of his hypnosis- ESP experiments to a meeting of the British Association for the Advancement of Science in Glasgow, Scotland. The Biology Section refused it, but it was accepted by the Anthropology subsection, thanks to the intercession of Alfred Russel Wallace, the chair for that year. The paper created a sensation at the conference and in the press, but it was denied the custoMary publication in the British Association Proceedings.

Whether it was Barrett or someone else who first suggested the idea of the SPR as an alliance of psychical researchers and spiritualists has long been a matter of dispute, but it is probably true that only Barrett could have brought the two sides together. Barrett was acquainted with Frederick W.H. Myers, Edmund Gurney and Henry Sidgwick, who from 1874 had been involved in systematic investigations of mediumship, and who were about to form the central force of the SPR, but he was also on good terms with the spiritualist community.

The SPR’s first organizational meeting was held at the offices of the British National Association of Spiritualists in 1881, and it was formally constituted the following year. Barrett was a member of the SPR’s Council from the start, and he initiated publication of a Journal in 1884 (Proceedings had been issued from 1882).

Later in 1884 Barrett travelled to Montreal for that year’s meeting of the British Association, and he was invited to Philadelphia to deliver before the American Association for the Advancement of Science the paper for which he had been snubbed two years earlier in Glasgow. A lively discussion followed the reading, and an American Society for Psychical Research (SPR)was proposed. A few days later Barrett was in Boston talking about the SPR to a formation committee.

Although Barrett contributed important papers on dowsing to the SPR Proceedings in 1900 and 1901, and was elected to the SPR presidency in 1904, his Spiritualist tendencies placed him outside the ruling group that centered on Sidgwick and his colleagues. On the other hand, he was also interested in a broad range of psychical phenomena, and he was unhappy with the increasing emphasis on the Cross Correspondences after the turn of the century.

In 1916, when in his early 70s, Barrett married Florence Willey, an eminent gynecologist, and moved to London to be with her. He died there on May 26, 1925. The following year, Lady Barrett received communications through medium Gladys Osborne Leonard that she believed to have come from her late husband; she published these in a book called Personality Survives Death (1937).

In the last years of his life, Barrett collected accounts of apparitions seen by dying persons, and these were published posthumously as Deathbed Visions (1926). A book on dowsing was completed by SPR Librarian Theodore Besterman and also published posthumously (1926). Barrett’s other books include Thought-Transference (1882); On the Threshold of a New World of Thought (1908); On Creative Thought (1910); Psychical Research, a volume in the Home University Library series (1911); Swedenborg: The Savant and the Seer (1912); and On the Threshold of the Unseen (1917).

Professor of physics at the Royal College of Science for Dublin, Ireland, from 1873 to 1910, Sir William Barrett (1844–1925 )wrote extensively on various topics related to the paranormal, and he was the driving force behind the creation of both the American and the British Society for Psychical Research, the first organization devoted to the scientific study of paranormal phenomena. Barrett believed strongly that spirits of the deceased could communicate with the living, and he witnessed many events that he felt supported that view. He also conducted studies of people who claimed to have paranormal powers.

For example, in 1881 Barrett examined the paranormal abilities of four sisters— the daughters of the Reverend A.M. Creery of Buxton, England—who could supposedly read minds. Barrett wrote the words for various household objects, such as “hairbrush” and “wine glass,” on pieces of paper, then showed the papers to the Creery family members other than the girl being examined. The girl being examined then tried to discern the names of the objects, and for the most part she succeeded. Barrett repeated this experiment again the following year, along with an experiment that involved having the girls guess, again individually, which card he had chosen from a deck of playing cards.

In the end, Barrett concluded that the Creery sisters did indeed have psychic powers. Much later, however, the Creery sisters admitted that during at least some of the experiments they were relying not on mental telepathy but on a series of signals they had developed so that whomever was being examined could receive information from the other girls. This confession led some people to doubt Barrett’s other examinations of paranormal abilities, but his supporters countered that the Creery case was his only mistake among the many investigations he conducted.

Sir Oliver JosephLodge (1851–1940) was a physicist, educator and psychical researcher, a prominent member of the Society for Psychical Research (SPR). Although he made important…