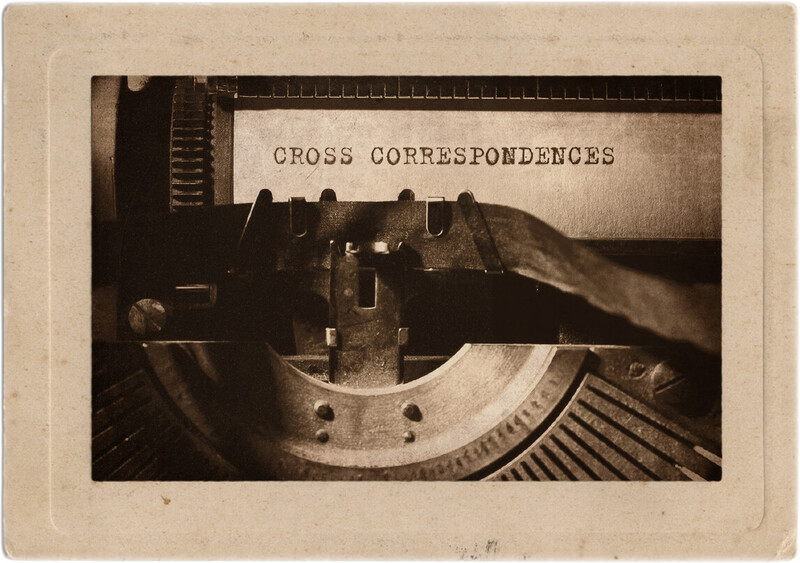 Ideal cross correspondences involve messages which are incomplete and must be put together like pieces of a puzzle. There is no natural explanation for cross correspondences. Some psychical researchers believe they provide strong evidence in support of Survival After Death. Others say the mediums obtain the information from their own unconsciousnesses, or from each other or other living persons through unconscious Telepathy or Clairvoyance (see Super-PSI).

In his seminal work Human Personality and Its Survival of Bodily Death, published posthumously in 1903, Myers stated that the influence of science on modern thought might be continued after death, and that the dead would know what constitutes good evidence of survival and would discover how to produce it. He believed that producing this evidence would require a group effort on the part of the dead rather than an individual effort.

Myers stated while living that he would attempt to communicate posthumously. Sidgwick had been open to the possibility of survival, while Gurney had been skeptical. The first cross correspondences were produced by several mediums prior to Myers’s death. These were simple, showing similarities among trance utterances and automatic scripts of mediums sitting simultaneously but separate from one another.

After Myers’s death in 1901, cross correspondences became more frequent and complicated, especially in the notable cases known as the Palm Sunday Case and the Ear of Dionysius. The complex and ideal cross correspondences in these and other cases seemed to reveal an intelligent purpose behind masses of fragmentary and symbolic communications.

The messages were unintelligible to the individual mediums involved and only became coherent after much analysis and comparison. Clues to links between messages were found in classical literature, poetry, topics that had been of interest to the dead while living, and to events that had taken place in life. Literary clues also seemed to pertain to life events. Sometimes, the discovery of these obscure clues proved difficult; years were spent making sense of the communications.

By 1918, the various mediums and investigators working through the SPR concluded that cross correspondences formed large, linked groups. SPR founding member Frank Podmore was among those who believed that cross correspondences were the result of telepathic communication among the living. He suggested that one medium telepathically broadcast material, which was picked up by other mediums.

However, the fact that the individual messages seemed to have been couched in symbols, were disseminated with apparent deliberation, and were made unintelligible to individual mediums, strengthened the case for survival. The principal SPR investigators of the cross correspondences concluded that the messages were genuine communications from the discarnate personalities involved.

Leonora Piper and Gladys Osborne Leonard were among the mediums to participate in cross correspondence research. Interest waned after the 1930s, following the conclusion of the Palm Sunday Case. Cross correspondences have appeared since then in psychical research, but have not been the subject of great study.

The Palm Sunday Case is an unique English case famous in the annals of psychical research for its evidence of Survival After Death. The Palm…

Automatic writing is writing done in a dissociated or altered state of consciousness that is attributed to spirits of the dead or other discarnate beings.…

Frederic William Henry Myers (1843–1901) was a poet, classical scholar, psychologist, and psychical researcher, a founding and leading member of the Society for Psychical Research…