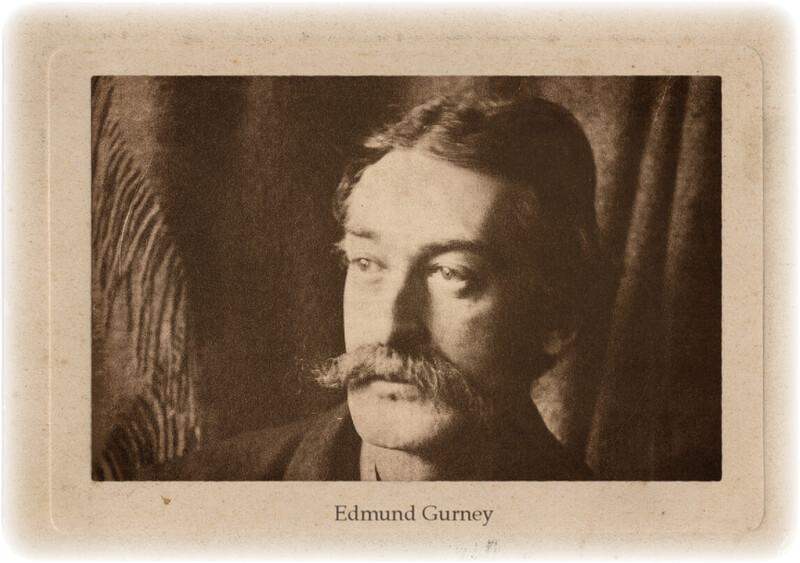 Edmund Gurney (1847–1888) was a classical scholar, musician, psychologist and psychical researcher, a founding member of the Society for Psychical Research (SPR), best known as the principal author of the classic work Phantasms of the Living (1886). He was also one of the foremost authorities of his day on hypnotism and contributed several important papers on the subject to the SPR Proceedings and to the journal Mind.

Edmund Gurney was born March 23, 1847, in Hersham, Surrey, England. He attended Trinity College, Cambridge, where he studied classics. His original choice of vocation was music, to which he devoted the five years 1872 to 1877, and about which he wrote his first book, The Power of Sound (1880). When he failed to reach concert standard, he switched to medicine; but he found the hospital too stressful, and briefly took up law instead. He married Kate Sibley in 1877 and by her had a daughter, Helen May.

Gurney’s active interest in Psychical Research began in 1874 when he and Frederic W.H. Myers attended a Séance with William Stainton Moses. Gurney and Myers, along with Henry Sidgwick, Arthur Balfour (see Balfour Family) and others, subsequently sat with several Mediums over a period of years, but they encountered little in the way of genuine paranormal ability, let alone phenomena suggestive of Survival After Death. This group nevertheless is important because it included many of those who came to be centrally involved in the SPR when it was established in 1882.

Gurney himself served on the SPR’s governing council from its inception and was its secretary and the editor of its Proceedings from 1883. In psychical research, he found the career for which he had been searching. Gurney’s early work with the SPR concerned experiments using hypnosis in tests for ESP. In one of the first series, he and Myers tested two men, G.A. Smith and Douglas Blackburn, in London and in the town of Brighton. Good results were gotten, especially with drawings and diagrams, and Gurney hired Smith as a private secretary; Smith’s hypnotic susceptibility made him valuable in the experimental work as well.

Gurney continued working with hypnosis until 1888, varying and improving the conditions under which the tests were made. Gurney was responsible for writing most of Phantasms of the Living (1886), a massive two-volume study of the evidence for telepathy, particularly from crisis apparitions (see Apparition). Crisis apparitions are those that appear coincidentally with a death or life-threatening crisis. Gurney built a careful case to explain them as hallucinations of the percipient, resulting from an impression of the agent’s crisis gained via telepathy. Besides breaking new ground theoretically, Phantasms of the Living also for the first time set forth standards of evidence and methods of investigation appropriate to the study of psychic phenomena.

Many of Gurney’s papers on various subjects, from diverse fields, were collected in Tertium Quid (1887). He died suddenly and prematurely (he was 41) on the night of June 23, 1888, at a hotel in Brighton. Gurney had suffered for some time from insomnia and neuralgia, and took chloroform to relive the pain. He was found lying in bed, with a sponge-bag pressed over his nose and mouth and a small empty bottle on the table. The death was ruled accidental, but the suspicion that it was a Suicide remains to this day. There are hints that Gurney admitted taking his own life in some private (and otherwise evidential) communications through Leonora Piper to Sir Oliver Lodge, when Piper visited England in 1889–90. Gurney is said to have gone to bed in good spirits, but he had alternating periods of exhilaration and despair throughout his life (he seems to have been manic-depressive), and he could conceivably have passed into one of the latter phases that night. The sceptical historian Trevor Hall has suggested that Gurney killed himself when he learned that it was true (as Blackburn had claimed) that Smith and Blackburn had cheated in their series of tests.

Hall, however, offers no real evidence for his conjecture, and in the absence of convincing evidence one way or the other, the exact circumstances of Gurney’s death are likely to remain a mystery.

Gurney, Edmund (1847–1888) Nineteenth-century English psychologist Edmund Gurney is best known for his studies related to hypnosis, telepathy, and hallucinations, which he wrote about in such works as the two-volume Phantasms of the Living (1886). He was also one of a group of men who founded the Society for Psychical Research in 1882, an organization dedicated to the scientific study of psychic phenomena. Conducting his research in an era when serious scientists were attempting to confirm the existence of the subconscious mind, Gurney was interested in spiritualism because he suspected that the human subconscious survives death. To this end, he accompanied a noted researcher of psychic phenomena, Frederic W.H. Myers, to séances from 1874 to 1878, trying to determine whether mediums’ powers were genuine. Gurney’s research into hypnosis took place from 1885 to 1888, during which he hoped to discover some hidden aspect of the mind that might also be responsible for telepathic abilities. His research was cut short, however, by his death from a drug overdose in 1888.