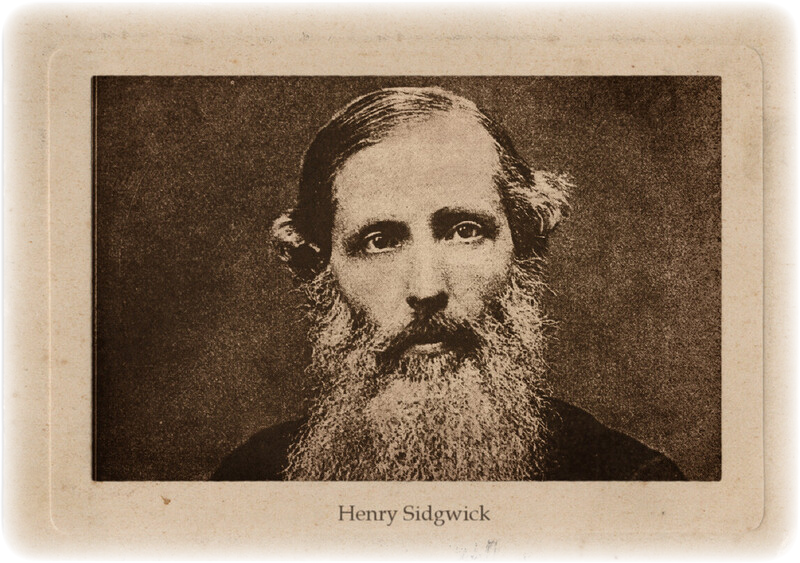 Henry Sidgwick (1838–1900) was a Cambridge philosopher, founding member and first president of the Society for Psychical Research (SPR). Sidgwick’s academic stature lent important support to the SPR in its early, formative years.

Henry Sidgwick was born May 31, 1838 in Skipton, Yorkshire, England. His father, the Reverend William Sidgwick, headmaster of the Skipton grammar school, died when Sidgwick was three, and he and three other children were raised by their mother alone. Sidgwick attended preparatory schools in Bristol and in Blackheath before entering Rugby in 1852. In 1855 he went to Trinity College, Cambridge to study classics and mathematics.

Sidgwick received several honors and upon graduation in 1859 was appointed to a teaching fellowship at Trinity. This position, however, required him to declare himself “a bona fide member of the Church of England,” and this his gradually developing religious doubts no longer allowed him to do. He resigned in 1869, but the College created a position for him as lecturer in moral sciences. In 1883, Sidgwick was elected Knightbridge professor of moral philosophy, a position he held for the remainder of his life. Among his students were Arthur Balfour (see Balfour Family), Edmund Gurney, and Frederic W.H. Myers.

Sidgwick’s interest and involvement in psychical research was longstanding. He joined the Cambridge Ghost Club at Trinity as an undergraduate. In 1860 he attended his first sitting with a professional Medium; he considered this person to be “a complete humbug,” but it did not dampen his interest in spiritistic phenomena. Myers recounts how on a “starlight walk” in 1869 he asked Sidgwick “whether he thought that when Tradition, Intuition, Metaphysics had failed to solve the riddle of the Universe, there was still a chance that from any actual observable phenomena—Ghosts, spirits, whatever they might be— some valid knowledge might be drawn as to the World Unseen.” Sidgwick replied in the affirmative, and in 1874 Sidgwick and Myers joined with Balfour, Gurney and others in a series of more careful investigations.

This group sat with many of the more important mediums of the day, but with discouraging results. At many sittings nothing happened; at others trickery was detected or strongly suspected. Sidgwick found the whole thing “dreary and disappointing.” But the investigations were important in another way; through them he became acquainted with Balfour’s sister Eleanor, whom he married in 1876.

Sidgwick and Eleanor Balfour shared not only a passion for psychical research, but also a dedication to the education of women. Sidgwick sponsored special courses for women beginning in the early 1870s, and in 1874 he helped to found Newnham College, the first women’s college at Cambridge, of which his wife became the principal in 1892.

The disillusioning Séances of the later 1870s could easily have led Sidgwick to drop psychical research from a central place in his life, were it not for the work of Sir William Barrett, the physicist who conducted a successful series of experiments on telepathy. Barrett was instrumental in bringing together scientists and Spiritualists in an organization for the serious investigation of a broad range of psychical phenomena. Sidgwick was invited to become the first president of this new society (the SPR); he hesitated, but eventually agreed, and with his acceptance Myers and Gurney as well as other members of the earlier group also joined.

Sidgwick served as president of the SPR in 1882, 1883, and 1884. He resigned the following year to allow for a change (his place was taken by the eminent physicist Balfour Stewart), but took up the editorship of the society’s publications. He then succeeded Stewart for a second period as president, this lasting from 1888 to 1892.

In 1884 Sidgwick proposed the creation of a committee to investigate the mediumistic claims of Madame Helena P. Blavatsky, cofounder of the Theosophical Society. He served on this committee during its deliberations in London, and underwrote the trip of Richard Hodgson to India to look into the case.

Sidgwick played a major role in organizing the Census of Hallucinations, conducted between 1889 and 1894 in an effort to verify the findings of the 1885 case collection, Phantasms of the Living, and he appears as first author of the report, published in the SPR Proceedings in 1894.

Sidgwick also took part in investigations of Eusapia Palladino, but these only confirmed his earlier distrust of physical Mediumship. At the end of his life, he had a few sittings with the mental medium Leonora Piper; but although he was impressed by the evidence of supernormal knowledge she exhibited with some of his friends and colleagues, his own experience was once again disappointing.

Sidgwick died on August 28, 1900, of cancer, at the home of his wife’s brother-in-law, John Strutt (Lord Rayleigh), in Terling, Essex. Sidgwick’s works of philosophy include The Methods of Ethics (1874), Principles of Political Economy (1883), and Practical Ethics (1898).

Sidgwick, Eleanor Mildred Balfour (1845–1936) Mathematician and educator, for many years principal of the first women’s college in Cambridge, and a leading figure in the…