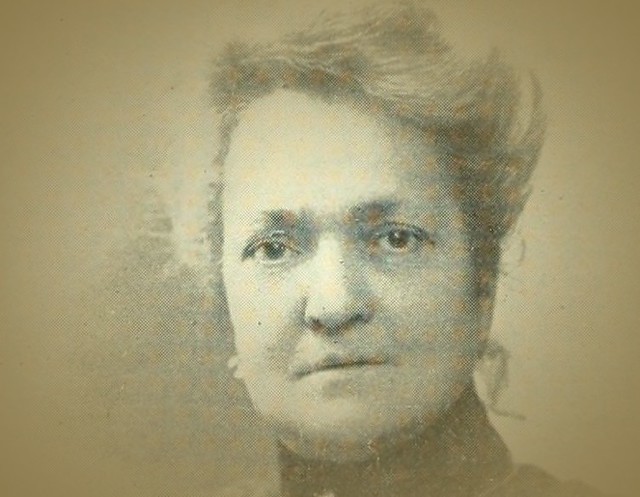 Eusapia Palladino (1854–1918) was one of history’s most outstanding yet controversial physical Mediums, investigated by a record number of Scientific committees, largely in her native Europe, but also in England and the United States. She would indulge in trickery when given the chance, but if properly controlled she was capable of producing phenomena such as Rapping, Levitation, and Materialization.

Eusapia Palladino was born on January 21, 1854 in the mountain village of Minerverno Murgo in southern Italy, a child of peasants. She gave investigators contradictory stories of her early life; according to one version, her mother died giving birth to her, and her father was killed by outlaws when she was eight. According to another and more widely accepted version, her mother died soon after her birth and her father died when she was 12. 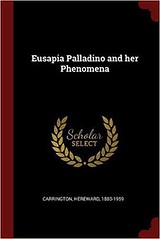 In any event, after she was orphaned, Palladino was taken into the family of friends in Naples. This family dabbled in Spiritualism, and there came a time when the young Palladino was invited to participate in a Séance. The table tilted and then rose completely into the air. She began to sit as a medium, it seems, to avoid being put into a convent, although she was afraid of her powers and avoid using them.

Palladino’s Control was identified as the spirit of the deceased pirate, John King, as the result of a curious incident. One day an unknown woman came to the house where Palladino was staying. At a recent sitting in another place she had received a message from King to the effect that there was a powerful medium, residing at this address, through whom he intended to produce many marvelous phenomena. After this, King began to announce himself as soon as Palladino sat at the Séance table; he remained her control throughout her career.

Palladino married a merchant named Raphael Delgaiz and worked in his shop. Evidently she had begun to sit professionally by the time she came to the attention of Neapolitan professor Ercole Chiaia. Chiaia encouraged the development of her powers and, in 1888, published an open letter to the renowned psychiatrist Cesare Lombroso, who had expressed an open-minded skepticism about Séance phenomena. Lombroso waited until 1891 to respond to Chiaia’s invitation to sit with Palladino, but the experience he then had marked a turning point in her life.

With Lombroso and another professor holding Palladino’s hands, a bell that had been placed on a small table a yard away from her sounded above the heads of the sitters. They struck a match and saw the bell suspended in the air. The bell then fell to the table and travelled from there two yards to a bed. This Séance was enough to convince Lombroso of the reality of physical phenomena, and he arranged for Palladino to undergo a longer series of tests in Milan the following year.

At the 17 sittings in Milan, some conducted in light rather than darkness, Levitations of the table and alterations of the medium’s weight were observed. The sittings were attended by several eminent scientists, including Lombroso and physiologist Charles Richet. A detailed report was published in the bulletin of the Psychological Section of the Medico-Legal Society of New York, and other investigations followed with other scientists in Naples and Rome.

A series held in 1894 is particularly noteworthy because it involved, for the first time, investigators from the London- based Society for Psychical Research (SPR). Richet hosted these sittings at his summer home on the Ile de Roubaud off the coast of France. The SPR’s Frederic W.H. Myers and Sir Oliver Lodge were present from the start, with Henry SIDGWICK and Eleanor Sidgwick also there later on. The SPR group were impressed by what they saw and prepared a report for the Society’s Proceedings.

When this report was published, however, Richard Hodgson, then in Boston as secretary of the SPR’s American Branch (see American Society for Psychical Research (SPR)[ASPR]), criticized some of the research as leaving room for trickery. As a result of Hodgson’s comments, a series of sittings was arranged in Cambridge, England in 1895. This Cambridge series proved disastrous.

It was the first time Palladino had sat outside Europe, and little happened at the first few Séances. Hodgson then deliberately let go of Palladino’s hand, and found her to be adept at cheating. The Sidgwicks and Myers declared that the trickery, which clearly had been practiced and perfected over many years, invalidated all the earlier findings from work with Palladino, including those from the Ile de Roubaud.

Palladino’s European investigators were not happy with the SPR’s pronouncement. They asserted that Palladino’s propensity to cheat had been known all along, but that if properly controlled, she could nonetheless produce striking effects. Another lengthy series of studies followed, with reportedly good results, and eventually the SPR decided to take another look. In 1908 it commissioned three experienced investigators, all of whom had knowledge of conjuring methods and had reputations for exposing mediumistic fraud, to sit with Palladino in Naples.

The three investigators were Everard Feilding, W.W. Baggally, and Hereward Carrington (Hodgson had died in 1905), and they were as surprised as were SPR officials when their study vindicated Palladino. Their detailed report, published in the SPR Proceedings in November 1909 (later reprinted in the book Sittings with Eusapia Palladino and Other Studies in 1963), is widely considered to be among the most important documents in the literature of psychical research.

But there was more to come. Carrington was so impressed with what he witnessed in Naples that he arranged for Palladino to visit the United States. She arrived in November 1909 and left in June 1910, having given 31 Séances. The first 27 of these were under Carrington’s supervision, and he restrained her when she tried to cheat. But the last four Séances were held at Columbia University in Carrington’s absence, and they were a disaster. Palladino was not restrained, and two detectives, hired for the purpose, were easily able to spot her tricks.

The Columbia exposure was well publicized, and it brought the end of American public interest in Palladino, although it had little effect upon the European investigators who had worked with her for years. The American sittings also produced one unlikely convert: the well-known American stage magician Howard Thurston. Thurston stated that he had witnessed one of Palladino’s Levitations, and he offered to give one thousand dollars to charity if it could be proven that she could not levitate except by trickery.

Palladino died on May 16, 1918. She had never learned to read or write, was unkempt in personal appearance and could be rather boorish in manner. Yet she had been one of the best-studied mediums in history. One book about her, by the psychiatrist Enrico Morselli, contained a 29-page bibliography of reports and discussions of her mediumship, published through 1909. If her cheating places her in a second class to D.D. Home, against whom no serious charge was ever levied, history may nevertheless choose to regard her as having helped to establish the reality of what today is called “macro-PK” (see Psychokinesis [PK]).

The Encyclopedia of Ghosts and Spirits– Written by Rosemary Ellen Guiley– September 1, 2007

John and Katie King : Father and daughter spirit Controls. Probably the busiest spirit of the dead in the history of Spiritualism, John King served…

Table-tilting (table talking) are the movements of a table during a Séance, attributed to the actions of spirits. Sitters place their hands lightly on a…