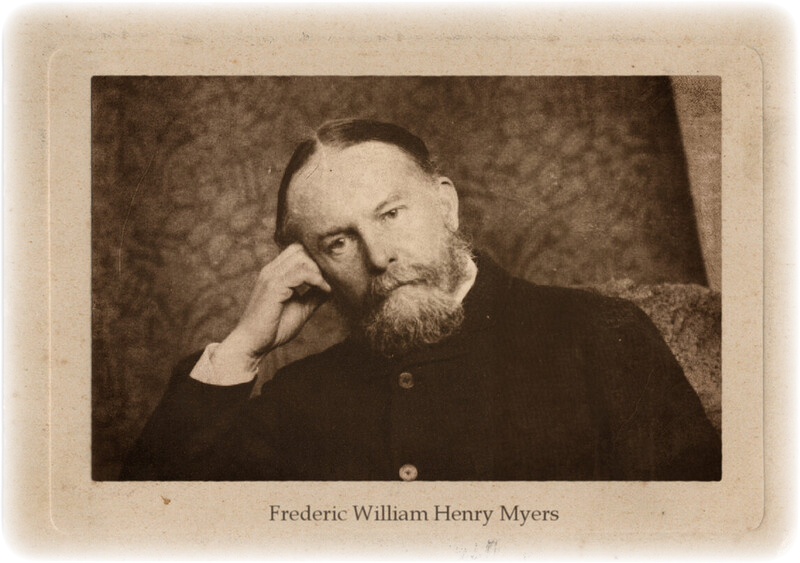 Frederic William Henry Myers (1843–1901) was a poet, classical scholar, psychologist, and psychical researcher, a founding and leading member of the Society for Psychical Research (SPR), best remembered for his great two-volume work, Human Personality and Its Survival of Bodily Death (1903).

Frederic W. H. Myers was born February 6, 1843, in Keswick, Cumberland, England, into the family of a clergyman. He was an impressionable, sensitive child. When he was little more than four years old, he saw a mole that a cart had run over. He was brightened by the thought that the mole’s soul had gone to heaven, but his mother, a woman with her own strong religious convictions, crushed him by telling him that the mole had no soul. The horror of this thought haunted him for the rest of his life.

Myers began to write poetry in his youth, and in 1859, when he was 16, he placed second in a national competition. The following year he entered Trinity College, Cambridge, to study classical literature. He passed through an intense religious phase, but then began to experience doubts which eventually led to a loss of faith.

Following his graduation from Trinity in 1864, Myers became a lecturer in classics at Cambridge; he was made a fellow of Trinity College in 1865. In 1869 he resigned his lectureship to work for the education of women. In 1872 he took a position as a school inspector.

In 1873 Myers fell passionately in love with his cousin’s wife, Annie Hill Marshall. Her marriage was a difficult one, marred by chronic ill health. Although she seems to have returned Myers’s affection, and the two spent many hours together walking in the valley at her estate at Hallsteads, the affair was never consummated. Annie Marshall’s SUICIDE in August 1876, following her husband’s commitment for insanity, was a blow from which Myers never recovered.

Myers’s love for Annie overshadowed his marriage to the beautiful Eveleen Tennant in 1880. She was devoted to him, but she lacked his intellectual inclinations and could not support him in the research and writing that came to occupy a central place in his life. The marriage, nonetheless, was happy, and produced three children.

The first outward sign of the direction Myers’s life’s work was going to take came in the summer of 1871 on a starlight walk with Henry Sidgwick. Myers asked Sidgwick “almost with trembling, whether he thought that when Tradition, Intuition, Metaphysic had failed to solve the riddle of the Universe, there was still a chance that from any actual observable phenomena—ghosts, spirits, whatever they might be—some valid knowledge might be drawn as to the World Unseen.” Sidgwick replied that he thought there might be, and thus was born in spirit the organization that was to become known as the Society for Psychical Research.

Myers began to sit with Mediums in 1872, sometimes in the company of Sidgwick, but the most decisive event of this period was the sitting with William Stainton Moses that he attended with Edmund Gurney in 1874. After this sitting, Myers, Sidgwick and Gurney formed a group for the study of Mediumship. The SPR itself came into being in 1882.

Sidgwick served as the SPR’s first president, and Myers had a seat on its governing council. He was also named to four of five investigatory committees, including the most important one, the Literary Committee, whose responsibility it was to collect cases for publication in the Society’s Journal and Proceedings. Myers proved to be an especially sensitive analyst of the case material. He also participated in important investigations of Leonora Piper and Eusapia Palladino, among others.

Myers was listed as second author of Phantasms of the Living, a landmark book published under the SPR’s auspices in 1886 (Gurney was first author, Frank Podmore, third). Myers wrote an introductory chapter and a lengthy dissent from the theoretical position on apparitions taken by Gurney.

One of Myers’s most significant accomplishments was his concept of the “subliminal consciousness.” This anticipated Sigmund Freud’s “unconscious” by some years, and differed from the latter in being conceived not as a reservoir of repressed thoughts, but as the ground from which conscious thought sprang. The subliminal consciousness, according to Myers, was receptive to extrasensory input and, in a dualistic conception of mind and body, survived physical death. William James ranked Myers as among the greatest psychologists of his day on the basis of his ideas about the subliminal consciousness.

Myers served as the SPR’s secretary from 1888 to 1899 and as its president in 1900, at the same time as he was undergoing his eventually fatal illnesses. In March 1898 he suffered a sharp attack of the flu which turned into pneumonia; he had another attack of the flu in February 1899, and that November he was diagnosed as having Bright’s disease. Doctors ordered him to the Riviera to recuperate, but he refused. He died on January 17, 1901, at age 58, at a clinic in Rome to which he had gone on the advice of William James.

Myers’s contributions to Psychical Research, however, were not yet over.

In the last years before his death he had been working on a book that would summarize and systematize the findings of psychical research. Human Personality and Its Survival of Bodily Death was completed (at Myers’s request, by Richard Hodgson and the SPR’s Alice Johnson) and published posthumously in 1903.

But it had one major omission. Myers had intended to give a prominent place to the mediumistic communications he had received from his beloved Annie through Mrs. Thompson and Mrs. Piper; they had been decisive in convincing him that there was Survival After Death. But his wife found out about them and, immensely jealous, succeeded in having them suppressed. She evidently destroyed them as well; no sign of them has been found since.

Eveleen Myers also excised all mention of Annie from Fragments of an Inner Life, which she published in an edited form as Fragments of Prose and Poetry in 1904. Myers had had Fragments of an Inner Life privately printed and had given copies to several of his friends, but in sealed envelopes which he had asked them not to open until after his death. The pamphlet was not published in its unabridged form until 1961, by which time it was clear that the passages Mrs. Myers had cut out were key to understanding the meaning of communications allegedly received from Myers shortly after his death.

Before he died, Myers wrote on a sheet of paper, “If I can revisit any earthly scene, I should choose the ‘Valley’ in the grounds of Hallsteads, Cumberland,” and sealed it in an envelope which he gave to Sir Oliver Lodge for safekeeping (see Survival Tests). A few days after his death the medium Mrs. Verrall renewed her Automatic Writing so that Myers could give the contents of this envelope through her if he wished, and in time she produced the following: “I have long told you of the contents of the envelope. Myers’ sealed envelope left with Lodge. You have not understood. It has in it the words from the Symposium—about Love bridging the chasm.” The envelope was then opened and the test was judged a failure.

Closer study, however, revealed that although the test was literally a failure, there was nevertheless an association of ideas between what Myers wrote in life and what he communicated after death. The valley at Hallsteads clearly refers to his walks with Annie, and the passage from Plato’s Symposium is concerned with soul mates—which is how Myers felt about himself and Annie. When the full text of Fragments of an Inner Life came to light (one copy had been put away and could not be found when Mrs. Myers went looking for it), it was discovered that Myers himself had made the association in a poem printed there.

Related ideas and images from that and other poems were, moreover, found to correspond to images that had been cropping up in Mrs. Verrall’s automatic writing from the time she had taken it up following Myers’s death, consistent with the statement from the Myers communicator that he had “long told” of the contents of the envelope.

Other mediums, notably Leonora Piper, were also involved in these communications, which provide an example of what are known as Cross Correspondences.

The deceased Myers was seemingly one of the originators of this type of communication, which is considered among the most evidential for survival after death in the mediumistic literature.

This work, first published in the 19th century, was the culmination of more than 20 years of research into the survival of consciousness after death.…

Edmund Gurney (1847–1888) was a classical scholar, musician, psychologist and psychical researcher, a founding member of the Society for Psychical Research (SPR), best known as…