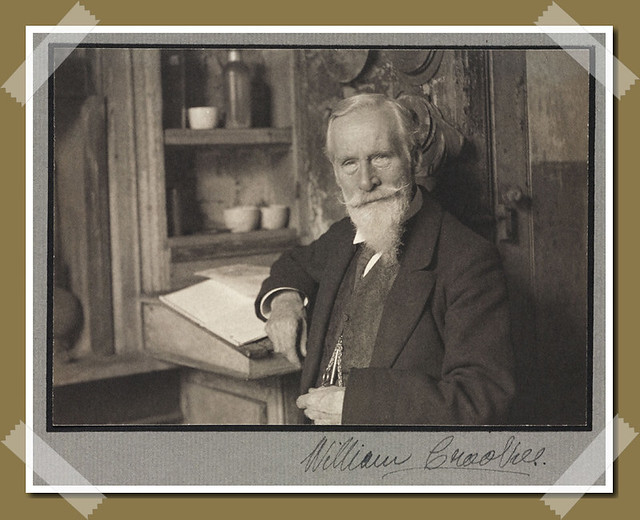 Sir William Crookes (1832–1919) was one of the 19th century’s greatest scientists, an honored chemist and physicist, and an early investigator of Mediumship. Crookes sat with D.D. Home and Florence Cook, among others. For much of his life he was committed to Spiritualism.

Sir William Crookes was born in London on June 17, 1832, one of 16 children of a gifted and prosperous tailor and his second wife (he had five other children by his first). Crookes was largely self-taught; he had had little regular schooling and no university education when, at age 16, he enrolled in the Royal College of Chemistry.

Upon graduation in 1854, Crookes went to Radcliffe Observatory, Oxford, as Superintendent of the Meteorological Department. While there, he invented an automated system for recording instrumental readings on wax paper. In 1855 he accepted a position as professor of chemistry at Chester Training College (a Scientific preparatory school), but he resigned after a year when he was not given a laboratory in which to continue his research. Although he tried periodically to get another teaching position, he was never successful in his efforts. Most of his later work was done in the laboratory he established in his home.

In 1856, Crookes married Ellen Humphrey of Lancashire. The marriage was very happy; it produced eight children, of whom four sons and one daughter survived their father.

From his home, Crookes wrote for and edited photography journals, and then in 1859 he founded a weekly, Chemical News, which he continued to edit until 1906. He also helped found and edit the Quarterly Journal of Science, beginning in 1864.

The year 1861 saw the first of Crookes’s major Scientific achievements. This was the discovery of the element thallium and the correct measurement of its atomic weight. He was elected a Fellow of the Royal Society in 1863, at age 31.

The death of his youngest brother, Philip, of yellow fever, in 1867, marked a turning point in Crookes’s life. He had been close to Philip, and was deeply disturbed by his death. At the urging of Cromwell Varley, a fellow physicist and a convinced spiritualist, Crookes and his wife attended some Séances in order to communicate with Philip. Although the details of these Séances have not survived, we know that Crookes believed that they were successful. He became a spiritualist, although for the most part he kept his beliefs to himself and never associated himself publicly with the religious movement.

Spiritualistic phenomena fascinated Crookes because they lay at the boundary of the known world, something which inspired other areas of his Scientific work. His systematic study of Mediumship began late in 1869 and continued into 1875.

One of his first Séances was with D.D. Home, together with two other famous mediums of the period, Frank Herne and Charles Williams. At this informal Séance, held after a dinner party at the home of a friend, Herne and Williams were thrown about and at one point lifted up in the air and set down upon the table. An accordion— Home’s trademark instrument—moved around from one sitter to another, playing all the while. Herne and Williams were later unmasked as frauds, but Home’s mediumship has survived all criticism.

It was Home, in any event, to whom Crookes chose to devote most of his time. Home always asked that his Séances be held in good light, and he welcomed Scientific investigations of his abilities. With Home, Crookes observed otherLevitationS and Table-TiltingS, as well as luminous phenomena and Materializations of hands. On one occasion, a hand rose up from between the leaves of a dining table and gave him a flower (he does not tell what kind). He encountered similar phenomena with some other mediums, although none were as powerful as Home.

Crookes was not content simply to observe Home’s phenomena; he wanted to see them produced under proper Scientific conditions. In his first report of his studies, he described how Home’s accordion would play and move around without contact within a metal cage, and how Home could influence a plank with a weight attached to raise or lower at will, while he and two other scientists of repute, William Huggins and Serjeant Cox, watched and took notes. In his discussion, he distanced himself from the belief that spirits were responsible for these effects, and suggested instead that they were due to some “psychic force” emanating from the medium.

Crookes believed the psychic force to be of supreme Scientific importance, and he tried in vain to interest other scientists in investigating it with him. He was snubbed by two members of the Royal Society he invited to attend experimental Séances with Home, and the same Society (its full name is the “Royal Society of London for Improving Natural Knowledge”) rejected the paper he submitted for publication. He published it instead in his Quarterly Journal of Science, to great controversy. One of his critics charged that the phenomena he reported could not have occurred because they were impossible, to which Crookes replied, “I never said it was possible, I only said it was true.”

Crookes’s second major series of investigations was with Florence Cook. These began in 1872 when Cook asked for an investigation in order to clear her name, after a sitter at one of her Séances had grabbed Katie King, the alleged full-form materialization of her spirit-guide, and declared it to be none other than Cook herself.

Crookes took control of Cook’s Séances, and for a period of four months she lived in his home. He was mainly interested in determining whether it was possible for investigators to see both Cook and Katie at the same time, and he claims to have done this, even taking a picture of the two of them together. With a battery of five cameras in his laboratory, he took a series of 44 pictures of Katie. He was also able to hold and measure her, reporting her to be taller, bigger, and somewhat prettier than Cook; Cook, moreover, habitually wore earrings, while Katie did not have her ears pierced.

Cook later was caught in fraud and to this day it remains a question whether her Séances with Crookes were genuine, or whether he was fooled by her. The skeptical historian Trevor Hall suggested that Crookes was having an affair with Cook, but there is no real evidence for this theory, and it is not widely accepted.

Crookes’s last series of sittings for research purposes was held in 1875 with another medium of doubtful reputation, Anna Eva Fay. After this, however, he decided that his time was better spent on more tractable Scientific problems, and he turned away from his psychic investigations. Although he supported the Society for Psychical Research (SPR) after it was formed in 1882, and served as its president in 1886, he did not take an active part in it.

The Royal Society gave Crookes its Royal Medal in 1875. In 1876 he invented the radiometer, a device that Demonstrated the effects of radiation on objects in a vacuum, and the special tube called the Crookes’ tube to go along with it. This in turn led to his discovery of cathode rays, which were shortly to lead to the discoveries (by others) of X-rays and the electron.

Crookes served as president of the Chemical Society from 1887 to 1889 and president of the Society of Electrical Engineers from 1890 to 1894. He was knighted in 1897. In 1898 he was elected president of the British Association for the Advancement of Science, and in his presidential address he made a point of saying he had nothing to retract from his earlier reports on Home and Cook.

Five years later, in 1903, Crookes invented the spinthariscope, an instrument used in the study of subatomic particles. He received the Order of Merit, one of Great Britain’s highest civilian honors, in 1910, and from 1913 to 1915 he served as president of the Royal Society, the organization that had so fiercely objected to his psychical investigations.

The death of Lady Crookes in 1916 was a severe blow. Crookes, who had never lost his Spiritualist inclinations, began to try to communicate with her. His first efforts were unsuccessful, but, after a visit to the Crewe Circle, he finally obtained what he considered to be photographic proof of her continued existence; the plate, however, is said to bear signs of having been doubly exposed.

Crookes died on April 4, 1919 in London, at the age of 87. He never wrote the book he was hoping to write on his psychical investigations, but his papers on the subject were collected in an unauthorized booklet, Researches in the Phenomena of Spiritualism, first published in 1874. This booklet and related materials are reprinted in Crookes and the Spirit World (1972), edited by SPR members R. G. Medhurst and K. M. Goldney.

The Encyclopedia of Ghosts and Spirits- Written by Rosemary Ellen Guiley – September 1, 2007

Sir William Crookes (1832–1919): British chemist and physicist Sir William Crookes is best known for his scientific studies, conducted in his private laboratory, related to electrical discharges, cathode rays, radiant matter, and the element thallium. In regard to the paranormal, however, Crookes is noted for examining and reporting on the abilities of Scottish American medium Daniel Dunglas Home, one of the most famous spiritualists of the nineteenth century. Writing in the Quarterly Journal of Science in 1871, Crookes— who later became president of the British Association for the Advancement of Science—told of seeing Home levitate himself, then said that although reason and the forces of gravity would suggest that levitation was impossible, Crookes could not doubt what he witnessed.

Two years later Crookes wrote of seeing Home, during a trance, take a hot coal from a fireplace and hold it in his hand for several seconds; Crookes noted that afterwards he could detect no burns or other injuries on the man’s palm or fingers. Consequently, Crookes maintained that Home’s powers appeared to be genuine. Because Crookes was such an eminent scientist, his statements carried great weight with the British public, thereby fueling people’s belief in spiritualism.

A collection of material relating to the most important of Crookes’ investigations. It is divided into three sections: “Researches into the Phenomena of Spiritualism”, “Sittings…

Florence Cook (1856–1904) was the most famous Medium known for spirit Materializations, especially full-form, but who was exposed as a fraud. Florence Cook was born…

Sidgwick, Eleanor Mildred Balfour (1845–1936) Mathematician and educator, for many years principal of the first women’s college in Cambridge, and a leading figure in the…