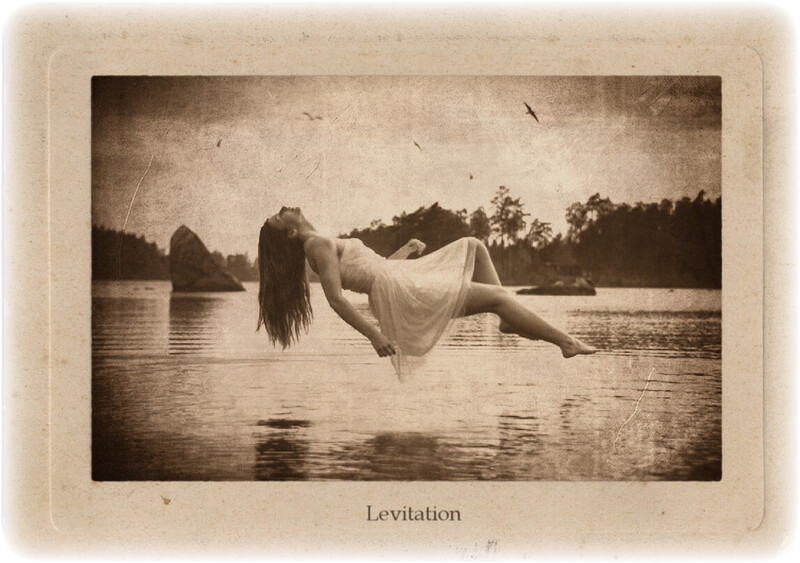 Levitation is the lifting up into the air of objects, persons and animals without apparent natural means and in defiance of gravity. Levitations occur in Mediumship, shamanistic trance, mystical rapture and trance, magic, bewitchment, Hauntings, and Possession. In parapsychology, Levitation is considered a phenomenon of Psychokinesis (PK), or “mind over matter.” Most Levitations last only a few seconds or perhaps a few minutes.

Levitations of a spiritual nature are numerous in religions. Saints and mystics reportedly levitate as proof of the powers of God, or in rapture, or because of their saintly nature. The 17th-century Christian saint, Joseph of Cupertino, allegedly could levitate and fly about in the air for long periods of time. In Eastern mysticism, Levitation is a feat made possible by mastery of concentration and breathing techniques that control the universal life energy.

The Western view of Levitation is contradictory: saints can levitate by the grace of God, but ordinary persons who levitate are often believed to be under the evil influence of witches, Fairies, or Demons. Levitation is one of the certain signs of the diabolical, according to the Catholic Church’s criteria for Demonic possession. In 1906, a 16-year-old possessed schoolgirl from South Africa, Clara Germana Cele levitated up to five feet high, sometimes vertically and sometimes horizontally. She fell if sprinkled with holy water.

Poltergeist cases and hauntings are sometimes characterized by levitating and flying objects, blamed on ghosts or discarnate beings. In some poltergeist cases, investigators think that a human focal point, typically an adolescent or an adult with intense, repressed emotions, unwittingly creates psychokinetic energy that causes the activity.

Levitation was a phenomenon of the physical mediumship popular in the early days of Spiritualism. Spirits allegedly caused mediums to rise up out of their chairs at Séances, and similarly caused tables and objects to rise and float about the room. Floating Trumpets, through which the spirits were said to amplify their voices, came into vogue in the 1850s.

The most spectacular Levitations were credited to D.D. Home, who reportedly caused furniture and objects to rise on many occasions during his career as a physical medium. Home levitated himself on more than 100 occasions before witnesses, and in 1868, he reportedly floated out and in windows. Unlike most other Mediums, Home was not always in trance during Levitations and so was aware of what was happening and how he felt. He said an unseen power lifted him, and he had “an electrical fulness (sic)” in his feet. The Catholic Church expelled him as a sorcerer; perhaps if he had been a saint instead of a medium, the church would have championed him. Home was never exposed as a fraud, but many other mediums were caught “levitating” objects with hidden wires and contraptions.

Levitation in controlled experiments is rare. Parapsychologists achieved Table-Tilting, most likely due to PK, in the “PHILIP” experiments to create an artificial poltergeist in the 1970s.

Skeptics argue that Levitations may be explained by hallucination, hypnosis or fraud; Home was accused of using hypnosis to trick his witnesses into thinking he levitated, when in fact he sat in a chair. According to stage magicians, a medium skilled in ventriloquism could easily have faked the type of Levitation in the dark that characterized most early spiritualist Séances. The medium removed his (or her) shoes or boots and placed them on top of his hands. He would say, “I am rising,” and sitters would be convinced they saw the dim shapes of the boots rising in the air.

Not all Levitations have a plausible natural explanation.

Levitation is a paranormal phenomenon whereby a body or object is raised up into the air in defiance of gravity. Levitation has been reported in cases of bewitchment, hauntings (see ghosts, Hauntings And Witchcraft) and possession; it also is attributed to saints and holy persons.

In 1550 in Wertet, Brabant, a group of nuns reportedly levitated into the air, climbed trees like cats and were pinched by invisible fingers. A townswoman was tortured into confessing she had bewitched them. In other cases, beds are said to levitate off the floor. In hauntings, witches, poltergeists and Fairies have been blamed for levitating people, animals and objects.

Levitation also has been accomplished by Western psychics and mediums and was a common occurrence— often done fraudulently—at Séances in the heydey of Spiritualism. The best-known levitating medium was Daniel Dunglas Home (1833–86), a Scotsman who was expelled from the Catholic Church on charges of sorcery. Home was reported to levitate many times over a 40-year-period and to control his flights, which were done in trance. On one occasion, witnesses said he flew out of one third-story window in a home and returned through another window. Home was suspected of trickery, but he was never convicted of any fraud.

Levitation occurs when someone appears to defy gravity and begins to float into the air, or when someone claiming to have psychic powers concentrates on an object and causes it to rise into the air. Many believers in levitation say that this phenomenon is caused by psychokinesis, whereby a person’s mind can affect the physical world. However, levitation usually occurs while the experient is in a trance, whereas psychokinesis usually occurs while the experient is in a normal waking state. Consequently, some believers say that some other, unknown phenomenon might be responsible for levitation.

One person who became famous for levitating in public was Daniel Dunglas Home, a British medium who lived during the mid-nineteenth century and who would sometimes rise into the air during séances. The first written account of his levitation feats appeared in 1853, when he levitated several times without seeming to be able to control his movements. Later, however, he seemed to grow skilled at choosing where, when, and how he would levitate, even giving demonstrations before large audiences. In his most famous demonstration, which occurred in December 1868, he went into a trance, rose from a chair into the air, floated out a window, and then hovered outside the window for a few seconds before floating back inside, landing on his feet, and sitting back down in the chair. Home’s séances also involved the levitation of tables, chairs, and other objects, as did the séances of many other mediums of his day. At the time, this was attributed to spirits who were called into the séance room by the medium.

Skeptics suggested that Home used some kind of mechanical device to levitate himself and various objects in the room, or that someone had in some way caused the witnesses to experience hallucinations. There is no proof, however, that cheating of this sort occurred. Moreover, witnesses insisted that they had not been having a hallucination when they saw Home go out the window. Adding credibility to this insistence is the fact that three years later, one of the most esteemed scientists of the nineteenth century, Sir William Crookes, saw Home levitate and declared that, as hard as it was to believe, he knew that his eyes were not lying.

For centuries, levitation has also been associated with religious, mystical, or magical practices. For example, according to Catholic tradition, some individuals who were later declared to be saints were said to levitate when in a trance or state of ecstasy or rapture. According to some accounts, 230 saints had this ability to varying degrees. Saint Teresa of Avila (1515– 1582), for example, wrote about how she would levitate in church, and Saint Joseph of Cupertino (1603–1663) was said not only to levitate but also to fly about once airborne. In some Eastern religions, levitation is said to be a skill developed by practicing certain breathing techniques and mental exercises to produce the altered mental state necessary for self-levitation.

Skeptics suggest that instead of triggering actual levitation, the altered mental state is causing hallucinations that make the experiencer only think that he or she is able to fly. This does not explain, however, why witnesses to public levitations insist that they saw the experiencer rise from the ground.