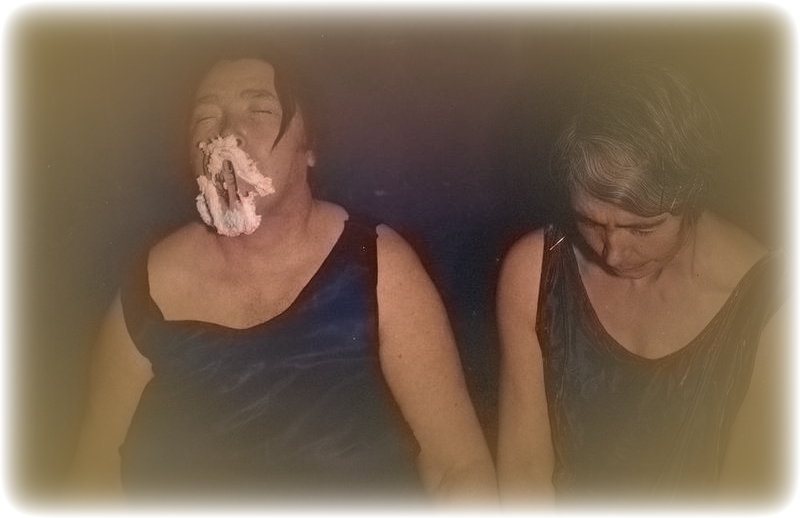 Ectoplasm is a seemingly lifelike substance, solid or vaporous in nature, which allegedly extrudes from the body of a medium and can be transformed into materialized limbs, faces or even entire bodies of spirits. Ectoplasm often appears milky white in colour and smells like ozone.

Coined by French physiologist Charles Richet in 1894 to explain the strange third arm, or Pseudopod, emanating from Eusapia Palladino, Ectoplasm comes from the Greek words ektos and plasma, meaning “exteriorized substance.” But Ectoplasm-like vapors had been observed surrounding D.D. Home by Sir William Crookes. And medium Madame d’Esperance described being covered with luminous spiderwebs which eventually developed into a living organism.

Earlier, a 17th-century philosopher named Vaughn described a substance he called “first matter” or “mercury” which seemed to be like Ectoplasm. These extrusions often seemed warm to the touch, had weight, produced carbonic acid and seemed to wax and wane from the medium’s body.

They could also be cold and rubbery or doughlike. Emanations usually came from a body orifice, such as the mouth, ears and nose, but could also pour from the eyes, navel, nipples or vagina. Their structure varied from amorphous clouds to thin rods to a wide membrane resembling a net.

Ectoplasm disappeared altogether in the light, preferring red incandescent light and darkness. If suddenly exposed to light,Ectoplasm snapped back violently, perhaps causing injury to the medium or nearby sitters. The substance could be light and airy, like smoke, or sticky and viscous. And like all other physical manifestations, Ectoplasm appeared best in an atmosphere of faith, not skepticism.

Ectoplasm allegedly must be released from the medium’s body before Materialization may occur. Gustave Geley, head of the Institut Metapsychique International in Paris, described Ectoplasm as an externalization of decentralized energy in solid, liquid or vapor states.

This decentralization expended great vital energy, which could manifest through rapping, phosphorescence, telekinesis or the production of Ectoplasm. Complete materialization was the final product of the Ectoplasmic process. William J. Crawford, of Queen’s University in Belfast, opined that Ectoplasm was the basis of all psychic phenomena.

It gave consistency to all physical structures during the Séance and gave these structures the ability to come into contact with ordinary forms of matter, thereby forming hands and faces. He also found Ectoplasm responsible for direct voice phenomena. Reverend Robert Chaney, himself a medium, described Ectoplasm as the spiritual counterpart of protoplasm.

He said that the medium’s Ectoplasmic body exists in the intercellular spaces of her physical body in vibration halfway between the physical and spiritual forms. In order to materialize spirits, the medium projects Ectoplasm from her own body and draws it magnetically from the bodies of the sitters. The spirit is then clothed in this astral substance and appears.

If the transformation is incomplete, the medium takes the spirit drapery and assumes the part of the spirit, a process called transfiguration. Although Palladino’s knobby pseudopods were fascinating, the real experts at Ectoplasmic manifestations were Marthe Beraud, alias Eva C., and Mina Stinson Crandon, known as Margery. Another successful Ectoplasmic medium was Kathleen Goligher (see Goligher Circle).

In experiments in the early 1900s with her colleague, Juliette Bisson, and later with German physician Baron Albert von Schrenck-Notzing, Beraud would produce masses of amorphous white or gray material. She was thoroughly examined before each sitting, often wearing tights or a veil. Schrenck-Notzing even had Bisson examine Beraud’s genitalia to verify that she was concealing nothing.

Schrenck-Notzing described Beraud’s Ectoplasm as similar to sticky, gelatinous icicles dripping from her mouth, ears, nose and eyes and down her chin onto the front of her body. When touched by hand or light, the Ectoplasm writhed back into Beraud’s body like the tentacles of an octopus. He found the stuff could go through fabric and not leave a trace.

After forming, the Ectoplasm often assumed faces or shapes, some resembling President Wilson and other popular government or historical figures.

Few researchers gave much credence to these testimonials, however, surmising that they were not so much paranormal manifestations as sexual. From 1917 to 1920, Crawford studied the Goligher family, especially their daughter Kathleen. Crawford was convinced that Kathleen Goligher could lift tables using a pseudopod, or what he called a psychic structure or rod.

They seemed to hang by tiny threads. Other extrusions came from between her legs; psychical researcher Eric J. Dingwall suspected Crandon concealed the Ectoplasm in her vagina and extruded it by muscular contractions. She even produced a third hand, grossly formed, from her navel.

Analysis of small pieces of Ectoplasm yielded few clues. Several critics claimed the stuff was either chewed paper, gauze or other fabric, probably regurgitated, or even animal tissue. Beraud’s Ectoplasm was most likely paper, and Harvard biologists found Crandon’s pseudopod to be animal lung cleverly carved to resemble a hand.

Magician Harry Houdini, who attempted to expose fraudulent mediumship, once commented that he couldn’t believe the Almighty would allow the production of such disgusting substances from a human body. Ectoplasm was investigated by psychical researchers well into the 20th century.

Fraudulent mediums were known to produce Ectoplasm composed of nothing more than strips of muslin, or mixtures of soap, gelatin and egg white. Scientific interest in Ectoplasm has declined along with the practice of physical Mediumship. Some contemporary mediums reputedly produce Ectoplasm.

In Paranormal Investigation, the term “Ectoplasm” is applied to filmy photographic anomalies. For example, white fogs and mists that have no known explanations are referred to as Ectoplasm and taken by some as evidence of the presence of Ghosts or other nonphysical entities.

To researchers into the paranormal, ectoplasm is a substance that allows ghosts to materialize in the natural world. This substance is said to explain why people sometimes report seeing ghosts as a white, filmy haze, and why this haze often appears in photographs purported to be of ghosts. During the nineteenth and twentieth centuries, ectoplasm was primarily associated with spirit communicators, or mediums, because the substance would sometimes appear to come out of a medium’s eyes, nose, ears, or mouth during a séance. This ectoplasm had various forms—semisolid, vaporous, or liquid, from small, gauzy tendrils to large, solid, humanlike shapes—and the affected medium would typically claim to have brought it from the spirit world to the natural world, along with the spirit’s mental and/or verbal communications. Many witnesses to such events were astonished by what they saw, and some developed theories regarding why ectoplasm extruded from the medium’s body. Among these theories, perhaps the most common was that spirits had to use some of the medium’s essence in order to manifest themselves in the séance room. Consequently, many people believed that if they touched the ectoplasm during a séance, the medium would die. Skeptics say that ectoplasm was a form of trickery used by charlatans to create the impression that they were in touch with the spirit world. One such medium eventually confessed to using fabric, most often chiffon, to create a gauzelike ectoplasm, and he claimed that some of his peers treated their fabric with phosphorescent substances to make it glow. Other mediums were discovered to be hiding pieces of cheesecloth or containers of liquid on their bodies, and others were caught swallowing materials that they would later vomit to produce the ectoplasm. In addition, those who investigated mediums sometimes found mechanical contraptions hidden in the séance room that could be used to manipulate ectoplasmic materials. Because of such discoveries, the idea that a medium can act as a conduit for ectoplasm has largely been discredited.

Pseudopod is an Ectoplasmic extrusion from a Medium that develops into a false hand or arm. The producing of Ectoplasm in a Séance can be…

Ideoplasty is in Mediumship, a theory that holds that the beliefs and expectations of sitters or experimenters telepathically influence the Medium, who in turn produces…