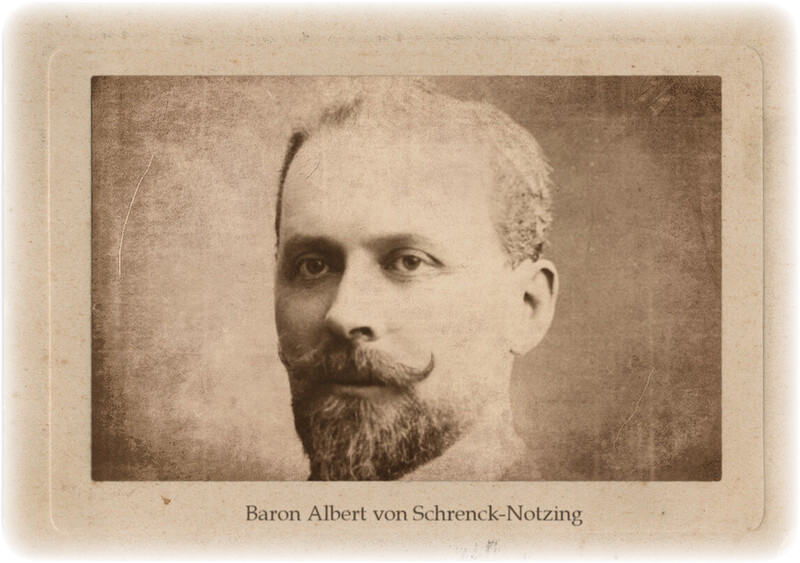 Baron Albert Phillbert Franz von Schrenck-Notzing, (1862–1929) was a pioneering German psychotherapist and psychical researcher, famous for his studies of physical Mediumship, which earned him the nickname Gespensterbaron, or “Ghost Baron.”

Baron Albert von Schrenck-Notzing was born on May 18, 1862, in Oldenburg, Germany. His was a noble family which traced its roots back to the 15th century and included civil and military functionaries employed by the grand dukes of Hanover and Oldenburg, hence his hereditary title. He studied the treatment of nervous disorders along with fellow student Sigmund Freud, and received his M.D. in 1888 for a study of the therapeutic use of hypnosis in a Munich hospital.

For a time, Schrenck-Notzing devoted himself to his medical practice, establishing himself as one of the foremost authorities of his day on hypnosis, sexuality and criminal pathology. His study of hypnotism had also introduced him to the psychic, an interest which was heightened by his acquaintance with the French physiologist Charles Richet, whom he met at a conference in Paris in 1889. The baron translated Richet’s reports on telepathy experiments into German in 1891. Through his marriage the following year to Gabrielle Siegle, who came from a wealthy industrial family, he became financially independent, and he gave up his medical career for psychical research.

Schrenck-Notzing’s first foray into his new field came in the form of telepathy experiments, modelled on those of Richet. The direction of his research changed sharply, however, when Richet invited him to participate in a series of sittings with Eusapia Palladino at his home on the Ile de Ribaud in France in 1894. Palladino was a physical Medium who, although she was not above cheating when given the chance, could produce Rappings, tilt tables, and move objects without physical contact (see Psychokinesis [PK]). Although according to Spiritualism such effects are accomplished through spirit agency, Richet and his friends at the British Society for Psychical Research (SPR), some who were present at these sittings as well, believed them to be produced by Palladino herself, by some paranormal means.

Physical mediumship appealed to Schrenck-Notzing, fascinated as he was with the mind’s unconscious workings. He began to travel throughout Europe to work with different mediums, some of whom he was able to expose as fakes. His first major subject was Marthe Beraud, whom he met in Paris in 1909. She had been studied previously by Richet in Algiers. Unlike Palladino, Beraud did not produce raps or tilt tables, but while in trance she exuded a substance (named Ectoplasm by Richet) which built itself up into various forms (see Materialization). Schrenck-Notzing studied Beraud (to whom he gave the sobriquet “Eva C.”) for four years, in Paris and at a laboratory he built in his home in Munich, before publishing his results.

Although The Phenomena of Materialisation (1913, English- language edition 1920) provides a detailed account of Schrenck-Notzing’s investigations, together with those of Beraud’s Paris sponsor, Juliette Bisson, and Richet, it met with immediate criticism from several quarters. The baron’s erstwhile medical colleagues were sure that he had taken leave of his senses. The public disliked the book because they found it disgusting to think that the spirits were as ugly as the Ectoplasmic formations they found depicted in the accompanying photographs. And the international psychical research community, which should have been more receptive, had long since concluded that all physical mediumship was hokum, and turned a cold shoulder as well.

Nevertheless, Schrenck-Notzing persevered in his work. When a retired Austrian naval officer, who had read and been impressed by The Phenomena of Materialisation, wrote to tell the baron about two brothers who were physical mediums, he arranged sittings with them. Schrenck-Notzing took up the regular study of Willi Schneider in 1919 and of his brother Rudi in 1925. When this work, too, was criticized from abroad, despite the elaborate precautions against trickery which he had instituted, Schrenck-Notzing and a German friend, Karl Kroll, developed an electrical system to be used for controlling the medium during Séances. Unfortunately, before the planned program of experiments could be carried out, both men died, and the method of electric control was left to others to develop further (see Schneider Brothers).

Schrenck-Notzing’s death came on February 12, 1929 in Munich, following an operation for acute appendicitis.

Pseudopod is an Ectoplasmic extrusion from a Medium that develops into a false hand or arm. The producing of Ectoplasm in a Séance can be…

Leading the reader through the darkened séance rooms and laboratories of Imperial and inter-war Germany, The Stepchildren of Science casts light on the emergence of…

Ectoplasm is a seemingly lifelike substance, solid or vaporous in nature, which allegedly extrudes from the body of a medium and can be transformed into…