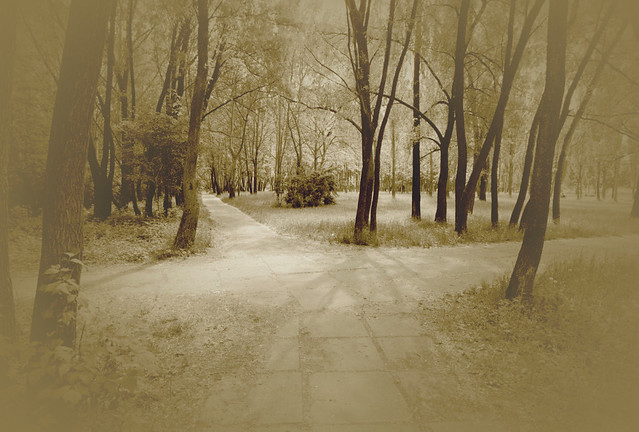 Crossroads are a place of change and great magical power. The junction of roads, where forces of energy cross, have been considered to have magical significance since ancient times.

Crossroads are haunted by Demonic and negative forces and are where witches supposedly gather for sabbaths. fairies who like to fool travelers haunt crossroads. Ghosts appear at crossroads at certain times, such as All Hallow’s Eve.

Some magical rituals are performed at crossroads, such as necromancy, the gold-finding hen, conjurations of spirits and Demons, and sacrifices of animals.

Crossroads are unhallowed ground and according to folklore tradition are the places where suicide and murder victims, criminals, and the unbaptized should be buried. Restless ghosts and vampires can be prevented from walking among the living by burying corpses at crossroads.

Taken from: The Encyclopedia of Magic and Alchemy  Written by Rosemary Ellen Guiley Copyright © 2006 by Visionary Living, Inc.

Crossroads are a heavily charged place of Magic. The Greek goddess of witchcraft, Hecate, was also goddess of the crossroads, and animals were sacrificed to…

crossroads The meeting and parting of ways are widely associated with magic, the appearances and activities of Demons, the Devil, witches, fairies (see Fairy), Ghosts…

Chimata is lord of the crossroads, highways, byways, and footpaths. He is an ancient phallic spirit. Phallic images representing him or meant to propitiate him…

Yoruba theology teaches that there are 401 powers of the “angels” called Orisha whose role is to act as protectors and facilitators of humankind; there…