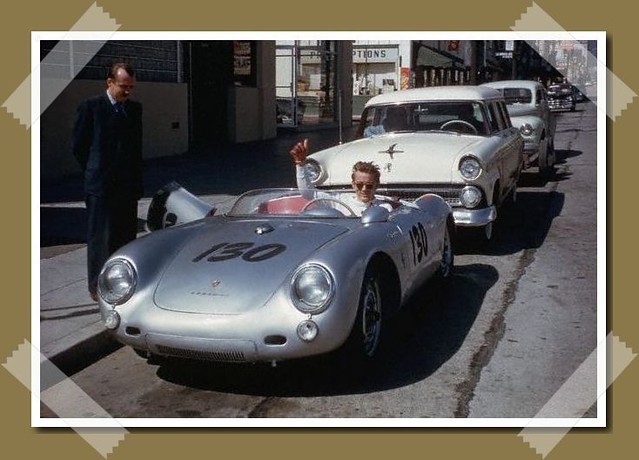 The curse of Little Bastard : The life and promising film career of the American actor James Dean were cut short by a fatal car accident in September 1955. Dean once said he believed he was predestined to die in a speeding car, and the legend that grew up around the circumstances of his death attributes a curse on the car in which he met his violent fate. Following Dean’s death, the curse affected others who came into contact with the wreck.

James Bryan Dean, born February 8, 1931, in Marion, Indiana, rose to fame in the film industry as the prototypical disaffected, rebellious young man. His leading roles in East of Eden and Rebel Without a Cause turned him into a superstar. He never finished his last film, Giant, co-starring Elizabeth Taylor and Rock Hudson; it was completed without him following his death.

Like his celluloid image, Dean liked to live on the dangerous, thrill-seeking edge. He loved fast sports cars and motorcycles; his favourite hobby was racing. He was an adroit driver and performed well behind the wheel, taking top honours in his first several races.

For most of the summer of 1955, Dean was on location near Marfa, Texas, for Giant. His employer, Warner Brothers, fearful of a mishap, forbade him from racing during production. He did not, however, stop driving pell-mell on his own.

After the location filming, Dean returned to Los Angeles, where his eye was caught by a new sports car, a silver-gray 1955 Porsche Spyder. Thinking it would make a fine entry in upcoming races at Salinas on October 1, he bought it, but on the condition that one of Porsche’s top mechanics, Rolf Wuetherich, accompany him as mechanic to all races. The deal was struck.

Although Dean was thrilled with the car—he puckishly named it the “Little Bastard”—several of his friends allegedly were not. Ursula Andress, Alec Guiness, Nick Adams (star of the TV series The Rebel), and George Barris, a car designer who had worked on Dean’s other sports cars, all apparently expressed feelings of unease about the car. Guiness reportedly told Dean to get rid of the car, to no avail. Barris said the car seemed to give off “a weird feeling of impending doom.” When Adams mentioned his own unease about the car to Dean, Dean shrugged it off, saying he was destined to die in a speeding car. The final warnings of caution came from Dean’s uncle, Charlie Nolan, just before Dean set out to drive to Salinas.

On the trip out of Los Angeles, Wuetherich rode with Dean. They were followed much farther behind by Bill Hickman, an actor friend of Dean, and Stan Roth, a photographer from Collier’s, which planned a photo story on Dean at the races. Hickman and Roth drove a Ford station wagon which towed a trailer.

Out on the open and nearly empty highway, Dean happily raced along. The car was topless and the windshield had been replaced by a much smaller racing shield. At about 3:30, a highway trooper near Bakersfield pulled the speeding Porsche over and gave Dean a ticket.

At Blackwell’s Corner, a small roadstop at the intersection of Route 466 (now State Highway 46) and Route 33, Dean spotted a Mercedes-Benz 300 SL gull-wing sports car, and stopped. The car belonged to Lance Reventlow, son of Barbara Hutton, heiress to the Woolworth fortune. Reventlow also was en route to the Salinas races.

After a short visit with Reventlow, Dean and Wuetherich climbed back in the Little Bastard and resumed their journey. They began the ascent of the Diablo Range mountains. Meanwhile, travelling in the opposite direction in a Ford sedan was Donald Gene Turnupseed, a student at California Polytechnic Institute, who was driving home for the weekend. At 5:59 P.M., Dean’s car bore down upon Turnupseed as he attempted to make a left-hand turn across the highway. Faced with a split second to decide whether to accelerate or swerve to avoid a collision, Turnupseed did neither, but slammed on the brakes. Dean must have seen the impending crash but was powerless to stop it. The two cars crashed head-on into each other.

Dean was killed instantly with a broken neck and other injuries. Wuetherich was thrown free and suffered a fractured jaw, broken leg, and internal injuries. The Porsche was badly mangled and nearly torn in two. Turnupseed suffered minor cuts and was not hospitalized. Dean’s death stunned Hollywood. Then a subsequent series of macabre events gave rise to the legend that Dean’s death car was somehow cursed.

The incidents began after Barris bought the wreck for its parts. Upon its arrival at Barris’s garage, the wreck slipped during its unloading and fell on a mechanic, breaking one of his legs. Then two physicians, Troy McHenry and William F. Eschrid, bought the engine and drive train, respectively, to place in their own race cars. On October 2, 1956 both doctors then raced their cars at Pomona, California, using the Little Bastard parts for the first time. McHenry was killed when his car went out of control and struck a tree, and Eschrid was seriously injured when his car mysteriously rolled over going into a curve.

Two of the Little Bastard’s tires were not damaged in the crash, and Barris sold both to a young sports car enthusiast. A few days later, the young man told Barris that both tires had blown simultaneously, causing him to run off the road and nearly wreck his car.

Souvenir-seeking fans sought out the wreck at Barris’s garage. One young man, attempting to steal the steering wheel, ripped his arm open on a jagged piece of metal; at least one other person was injured while trying to steal a piece of bloodstained upholstery.

Spooked by these incidents, Barris decided to store the wreck. He was persuaded by the California Highway Patrol, however, to allow the wreck to be used as part of a travelling highway safety exhibit. Two exhibits took place without incident, but prior to the third, in Fresno, the garage used to house the Little Bastard went up in flames during the night. All vehicles inside were destroyed— except the Little Bastard, which barely suffered scorched paint.

Wherever the Little Bastard went, injury, death and mishap occurred. On display at a Sacramento high school, the car fell off its pedestal, breaking a student’s hip. Later, the wreck was sent by flatbed truck to Salinas. En route, the driver, Geroge Barkuis, lost control of the truck and was thrown free; the Little Bastard fell off the truck on top of him, crushing him to death. Two years later, on another flatbed truck, the wreck fell off and crashed onto the freeway, causing an accident. In 1958, yet another strange mishap took place. A truck carrying the car was parked on a hillside in Oregon. The brakes slipped, and the truck crashed into a car shattering its window. Luckily, no one was hurt. In 1959, the Little Bastard was sent to New Orleans for exhibit. While on display, it suddenly fell and broke into 11 pieces. Barris was unable to determine the cause of the breakage.

The last mishap took place in 1960. The Little Bastard was lent to the Florida Highway Patrol for a safety exhibit in Miami. Afterward, it was crated and placed onto a truck for return to Barris in Los Angeles. It never arrived. Somewhere, out on the open road, the car vanished.

Those who believe in the Curse of the Little Bastard also point to the workings of misfortune in the lives of those whom Dean knew. Nick Adams, who dubbed his voice for Dean’s in several scenes of Giant, died in 1968 of an overdose of paraldehyde. The same year, Wuetherich was convicted of murdering his wife and sentenced to life in prison; he pled insanity at his trial. Lance Reventlow was killed in a plane crash. Sal Mineo, Dean’s costar in Rebel Without a Cause, was stabbed to death in 1976.

Was the Little Bastard cursed when Dean bought it— even though it was brand new—or did it become cursed as a result of his violent death? According to superstition, objects—as well as places—can become cursed when they are associated with violence and tragedy. If Dean truly was destined to lose his life in a car crash, then perhaps any car that became the death vehicle might have become cursed. According to Psychometry, objects absorb the emotions of their owners and those around them, and remain a repository of those emotions indefinitely. Is it possible that in the final, blinding, terrible seconds of James Dean’s life, he experienced emotions of such intensity that they were literally seared into his car, along with the violence of his death? The answer will remain forever a mystery.

In the 1950s, James Dean was the living embodiment of teen angst and swaggering cool. In death, he became a larger than-life legend, forever young…

The Divination Handbook is a modern seer’s guide to developing your intuitive abilities and mastering time-honored techniques used for fortune-telling and prediction. With this guide,…

In traditional tales of exorcism, the troublesome ghost is usually a member of the local gentry, but at Dean Prior (also called Dean-combe) it is…

Peterhouse College Oldest college in Cambridge, England, dating to the 13th century, and site of widely publicized Hauntings that involved ExorcismS. In April 1997, a…

Twenty-three years ago, Sam and Dean Winchester lost their mother to a demonic supernatural force. Following the tragedy, their father, John, set out to teach…