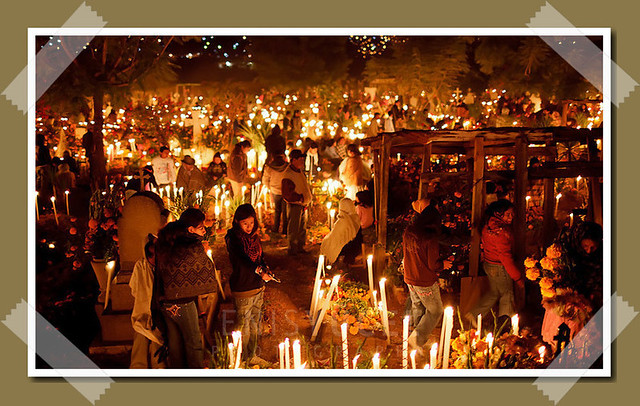 Day of the Dead A special holiday each year to honor the dead, involving parties, feasts, special foods, songs and parades.

Unlike holidays such as Memorial Day or Veterans Day, in which citizens remember former members of the armed forces with a parade, a gravesite ceremony and a long weekend, the Day of the Dead in most cultures brings the living and the dead together for a great feast and celebration to remember the departed and to placate them for another year. The worship and placation of the spirits of the dead is an ancient and universal practice, and it continues in many parts of the world.

The Chinese, who venerate their ancestors, perform special ceremonies in spring, summer and autumn to ease humankind’s two souls: the spiritual and the animal. The spiritual soul is petitioned to give special consideration to the departed’s descendants, and the animal soul is discouraged from rousing the corpse and disturbing the living.

Of particular import is the Hungry Ghost Festival, a two-week observance that takes place in the autumn during the Seventh Moon. People prepare offerings of food for those ghosts who have no living descendants to take care of them, and therefore are hungry. The ghosts are symbolized by lotus flower lamps that are carried through streets, and small boats with candles that are floated in streams at dusk.

In Japan, the equivalent of All Souls’ Day is Obon, or the “Feast of Lanterns.” It is celebrated between July 13 and 16. It is believed that the spirits of the dead come home during this time; they are entertained with food and offerings. Household services are conducted for the dead, and special lights are placed at gates to guide the spirits.

The “shades” of former tribal Africans remain with their families and intercede on their behalf with the divine spirits. To keep them happy, living relatives hold feasts with plenty of food and drink, frequently accompanied by animal sacrifice. The ancestor’s kin must attend the meal, since it is a communion among the living and the dead. If any of the family is quarreling, such disagreements are resolved at the feast to ward off witchcraft.

Hindu sraddhas, or rituals for the ancestors, last for 10 days. During that time the departed spirit receives food to help it survive the required trips though 10 different hells. Additionally, on the first of the new autumn moon, the head of each Hindu family holds ceremonies venerating the dead of the last three generations.

Elaborate ceremonies for the dead occur in Mexico. The Spanish conquistadores were shocked to find the Aztecs and the Mayans practicing cannibalism and human  sacrifice, and they violently discouraged such practices. But to the native Mexicans, personal and collective salvation did not depend on faith in future redemption but on the continuity of life and death: more specifically, the blood and death of humans.

They saw little distinction between life and death, viewing each as merely phases of a cycle. According to Octavio Paz, the well-known Mexican writer and diplomat, for the Aztecs the chief function of life was to die; death was life’s natural complement. Conversely, death was not an end but the food of future life. Sacrifi ce, then, served two purposes: to allow humans a role in the creative process and to pay back their debts to the gods. Celebrating death made continued life possible.

Forced to adopt Catholicism, the native Aztecs and Mayans transferred their death rites into the worship of the martyred saints. Grim religious artworks portray death in graphic detail. Even popular cartoons feature skeletons cavorting in a danse macabre representing all walks of life. Calaveras, or death’s heads, still can be found in any Mexican market or gift shop.

The official day of the dead, el Día de los Muertos, is November 2, All Souls’ Day. The native peoples received this date from the missionaries, but it fit in well with traditional corn festivals. Festivities actually begin on October 31, Halloween, or All Hallow’s Eve. The women of each family clean house, make candles and cook great quantities of chicken, tortillas, hot chocolate, sweet corn gruel called atole and a special bread baked in the shapes of little animals. The men build small clay altars on which they place offerings of food and toys to the angelitos, the little children in the family who have died. Around midnight, as the family prays, the angelitos come and enjoy their presents, then leave.

The next day, All Saints’ Day, the children enjoy the food prepared for the angelitos while the adults prepare an even bigger feast for the older deceased who will arrive near dawn the next morning. Such a party re quires spicier food and plenty of tequila and aguardiente. Older departed spirits deserve a bigger altar as well, complete with gaily decorated skulls and bones made from marzipan or a special bread baked for the occasion. Across the skulls’ foreheads appear the names of the departed or even a suitable motto or sentiment, such as “as I am, so shall you be.” Up until about the turn of the 20th century, celebrants dug up real skulls and then reburied them under the supervision of the local priest.

Outsiders may find such celebrations morbid, but the Mexicans do not. Walking through the town square, wrapped in banners and streamers, celebrants enjoy amusement park rides, munch on candy bones and tiny coffins, and drink quantities of strong alcohol. Mexicans believe the dead want to have a good time too, so mixing the sacred and the profane is quite normal.

Later on, the local priest visits his parishioners’ home altars, offering prayers and blessings. The shrine is usually hung with photographs of the departed and pictures of the family’s patron saints. Yellow marigolds surround the altar (yellow was the color of death before the Spanish conquest). Neighbors go from house to house, sharing food and drink and swapping memories of the deceased, who have now gathered to listen to what the living say about them. No dead soul is neglected for fear it may be sad or vengeful.

These visitations last all night and are followed by a mass at about 8 A.M., All Souls’ Day, at which time the departed return to their graves. After a day of rest, everyone proceeds to the cemetery that evening, where each family says prayers, sings songs and shares another meal with the departed in a picnic over the loved ones’ graves. These last visitations satisfy the deceased, who are once more able to rest comfortably until they need to rejoin the living again the next year. See Afterlife; Ancestor Worship; Feasts and Festivals of the Dead.