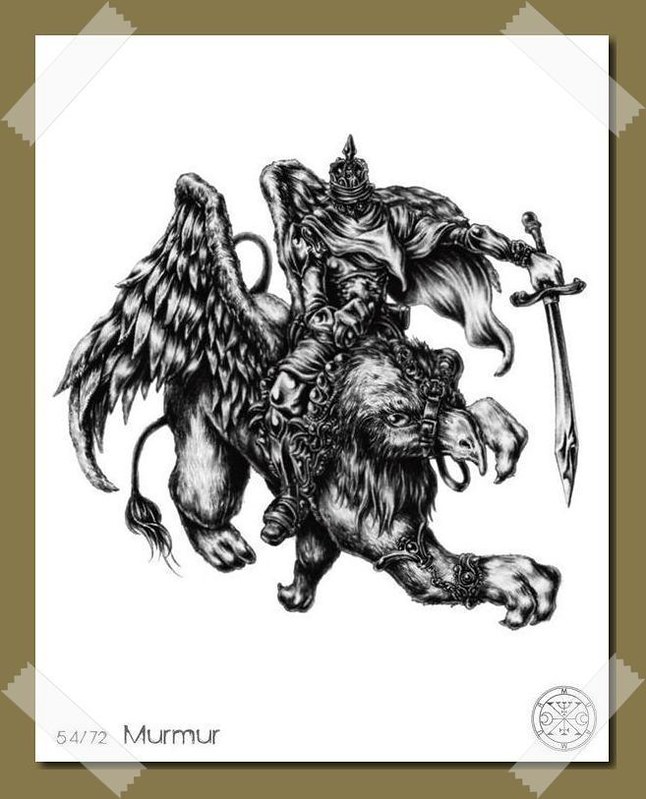 The Demon Murmur is a Fallen Angel and 54th of the 72 Spirits of Solomon. Murmur is a duke and earl with 30 Legions of Demons under his command. He appears as a soldier wearing a duke’s crown and riding on a griffin, preceded by two ministers sounding trumpets. He teaches philosophy and makes souls of the dead appear and answer questions. Murmur once was partly a member of the angelic orders of thrones and Angels.

MURMUR, or MURMUS. – The Fifty-fourth Spirit is called Murmur, or Murmus, or Murmux. He is a Great Duke, and an Earl; and appeareth in the Form of a Warrior riding upon a. Gryphon, with a Ducal Crown upon his Head. There do go before him those his Ministers, with great Trumpets sounding. His Office is to teach Philosophy perfectly, and to constrain SoulsOr Warrior.
Thus expressed in the Codices.
Deceased to come before the Exorcist to answer those questions which he may wish to put to them, if desired. He was partly of the Order of Thrones, and partly of that of Angels. He now ruleth 30 Legions of Spirits. And his Seal is this, etc.

Murmur is a great duke and an earle, appearing in the shape of a souldier, riding on a griphen [vulture], with a dukes crowne on his head; there go before him two of his ministers, with great trumpets, he teacheth philosophie absolutelie, he constraineth soules to come before the exorcist, to answer what he shall aske them, he was of the order partlie of thrones, and partlie of angels,