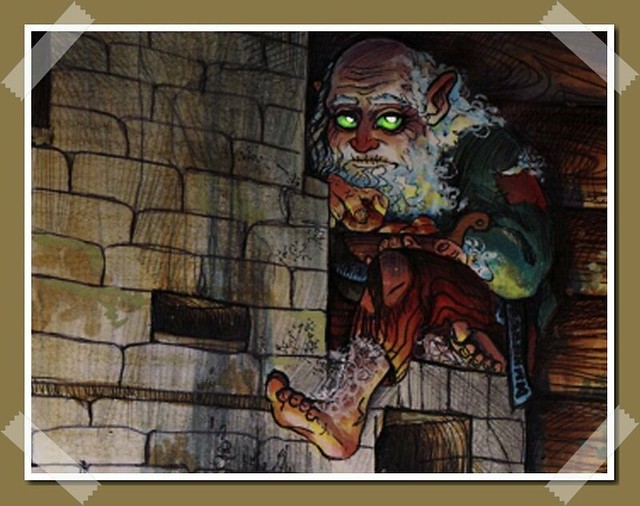 A domovik (also domovoj, domovoy) is in Russian folklore, a household spirit that resides in every home. The domovik traditionally is the ancestral founder of the family, and moves with it from house to house. He is portrayed as an old man with a gray beard, and is always referred to as “he,” “himself” or “grandfather,”—never by a personal name.

The domovik lives behind the stove. When a family moves, fire from the old stove is carried to the new, where it is lit to welcome the domovik into his new quarters. The domovik watches over family members, keeps hostile spirits from entering the house, and, like the brownie, does household chores. But if family members displease him, he makes poltergeist-like noise disturbances. His harshest punishment is to burn down the house.

The Domovoi is a Russian house spirit. His primary function is to protect the family, property, and animals associated with the home where he resides. He protects the family living in his home and warns them of impending disaster. (If a family member is awakened in the middle of the night by a cold, hard, furry hand, disaster looms.) The Domovoi is sometimes a harbinger of death; if the Domovoi dons the clothing of the head of the household or is witnessed imitating this person, his or her death is imminent. The Domovoi is most frequently witnessed as night.

The Domovoi may be an ancestral spirit. Address him respectfully as “Sir,” “Master,” “Uncle,” or “Grandpa.” The Domovoi may live in the big traditional Russian stove or in liminal areas: the cellar, attic, or over the home’s main entry threshold. It’s traditional to leave offerings in areas of the home he’s known to frequent.

The Domovoi may be attached to the house, but some Domovoi become quite attached to people. If you move, it’s crucial to formally notify the Domovoi of the move and request that he accompany his family to their new home. The Domovoi should also be formally introduced to any new horses living with or belonging to the family. Request his care and protection for the horse. Otherwise, if this is not done, the Domovoi may play tricks: tangling the horse’s mane, for instance, stealing its food, or moving its tack and grooming supplies so that you must search for them. He can also ride a horse to exhaustion at night. Once upon a time, Russians purchased horses in the color that their Domovoi preferred. The Domovoi grooms his favorites, braiding their manes and tails.

The Domovoi is usually heard, not seen. He likes to be invisible. His presence is revealed only by rustling noises. When visible, the Domovoi resembles a tiny old man with grey, tangled, locked hair and a bushy beard. He may be entirely covered in soft, downy fur, including his palms and soles. However, the Domovoi is a shape-shifter and may also manifest as a dog, cat, frog, rat, mouse, or other animal.

Kasha, bread, old-fashioned bast sandals (hang them up in the yard; he’ll find them)