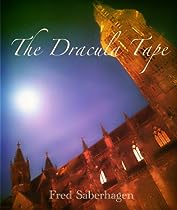 An “interview” predating by a year the self-revelation of Rice's Louis. In the first serious novel to present a vampire's story from his or her own point of view, Count Dracula retells the events of Stoker's book on the tape recorder of a car belonging to a descendant of Jonathan and Mina Harker.

Intent upon vindicating himself to the family of the woman he loves, as well as to the human world in general, the Count exposes the distortions in the published account of his 1890 move from Transylvania to England.

While adhering to the “facts” as recorded by Stoker (with the single exception of the date of Mina's pregnancy — and the broadminded reader might accept a vampirically-influenced thirteen-month gestation to reconcile this inconsistency), Saberhagen reinterprets them to show Count Dracula as the hero of the tale.

Taking this novel in isolation, the reader might suspect Dracula of being an unreliable narrator, since his account is as clearly self-serving as those of Harker and Seward. Saberhagen's sequels, however, make it obvious that the author does intend the reader to accept Dracula's testimony as accurate.

Of the later books in the series, I consider the most successful to be The Holmes-Dracula File (Ace, 1978), told in alternate chapters by Count Dracula and Dr. Watson — a respectful Sherlock Holmes pastiche as well as a suspenseful vampire novel, displaying, like The Dracula Tape, conscientious research into the late Victorian period. Other books in the series contain flashbacks in which Dracula reminisces about his pre-vampire life and the circumstances of his transformation.

Hotel Transylvania, by Chelsea Quinn Yarbro (Saint Martin's, 1978): Though not so well known to non-specialists as Rice's characters, Yarbro's Saint-Germain is probably the best-loved…

Westenra, Lucy From the novel Dracula (1897) by Bram Stoker, a character who dies from the attacks of the count, returning as a vampiress, a…

In blood-soaked lore handed down the centuries, the vampire is a monster of endless fascination: from Bram Stoker’s Dracula to Buffy the Vampire Slayer, this…