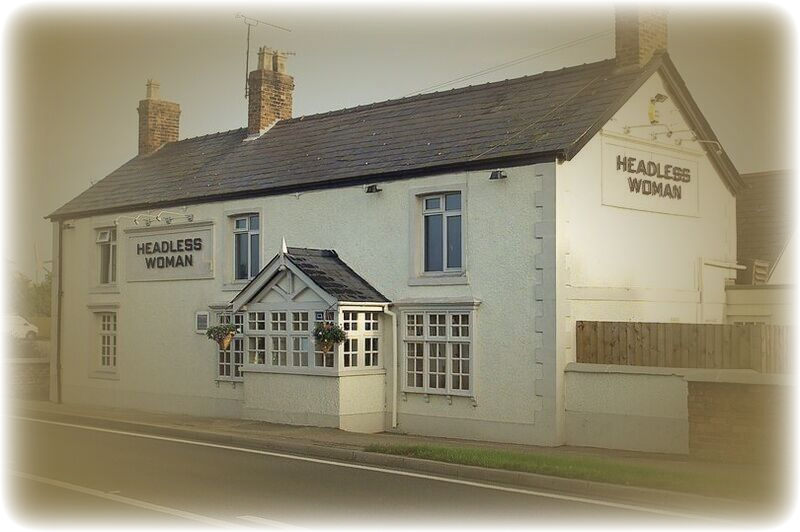 The pub in this village is named the Headless Woman, and its signboard does indeed show a woman carrying her severed head under her arm. Pubs displaying this image (now rare) were generally called the Silent Woman or the Quiet Woman, as a joke against chatterboxes – only decapitation could keep them quiet. In this case, however, the explanation offered is a local legend about a servant’s loyalty during the Civil War. Jacob Larwood reported in 1866 that the licensee at that time displayed a notice telling the tale:

A party of Cromwell’s soldiers, engaged in hunting down the Royalists in the Chester district, visited Hockenhall Hall, but found that the family being warned of their coming had buried all the silver and other valuables and then fled for safety, leaving only a faithful old housekeeper in charge of the Hall, thinking it unlikely that the soldiers would do her any harm.

The soldiers, being incensed at finding nothing of value, locked up the housekeeper in the top room and proceeded to torture her to tell them where the valuables were hidden. She remained faithful, and was finally murdered by the soldiers cutting off her head. Tradition says that afterwards, on numerous occasions she was seen carrying her head under her arm, walking along the old bridle path between Hockenhall Hall and the spot where it comes out on the Tarporley Road near to the public house.

The story is repeated in more recent books with additional details such as the name of the faithful servant, said to be a cook called Grace Trigg. Some say the soldiers carried her body and the head to a cottage at Duddon to hide them; this building was later on turned into the pub.

Headless ghosts are a cliché of folklore, but according to a Surrey writer, William Hurst Chouler, in 1978, the church in this village is haunted…

In 1930, the local writer Edith Olivier described various apparitions to be seen in and around Stourton. On New Year’s Eve, on a road near…

A remarkable number of ghostly traditions have been collected in and around this town in the mid twentieth century. A typescript in the Gloucestershire Record…

Two separate tales of haunting are told of Ragley Hall, in the parish of Arrow, and its park. First, as reported by J. Harvey Bloom…