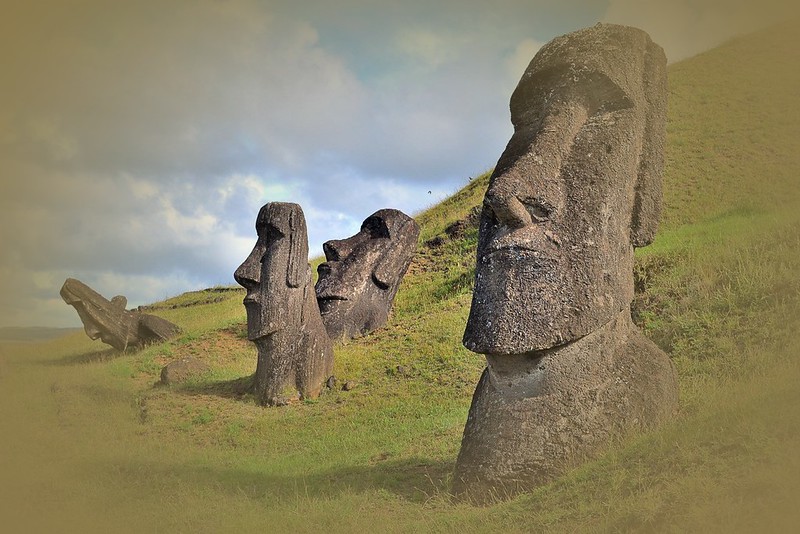 Easter Island : called Rapa Nui by its Polynesian inhabitants, Easter Island is located in the Paciﬁc Ocean more than 2,000 miles (3,219km) off the coast of Chile and is best known for the mysterious stone tablets and giant stone heads carved from volcanic rock located there. Some of the more than six hundred heads are as tall as 40 feet (12.2m) and weigh more than 50 tons (45.4 metric tons).

A nearby rock quarry has several half-carved statues. The stone tablets are carved with characters related to no known language. Some scholars, most notably Wilhelm Guillaume de Hevesy in 1932, have seen similarities between the script on the Easter Island tablets and certain prehistoric writings in India, but there is no explanation for these similarities.

Moreover, no scholars have been able to ﬁgure out what the Easter Island writings mean. Because of the mysterious aspects of the Easter Island tablets and stone heads, some people have suggested that extraterrestrials visited the island in ancient times and encouraged the creation of the carvings. Others have suggested that the island was once part of a continent that was lost beneath the sea and that this continent held a unique civilization, the remnants of which might be found somewhere beneath the ocean around Easter Island.

According to this theory, the monoliths on the island were carved thousands of years ago. Some archaeologists, however, believe they were created between 1600 and 1730, but others have said they were created between 1000 and 1600. In either case, skeptics say this is proof that the heads were carved by the Polynesians who inhabited the island during those periods and dismiss the idea that an extraterrestrial intelligence was responsible.

The Greenhaven Encyclopedia of Paranormal Phenomena