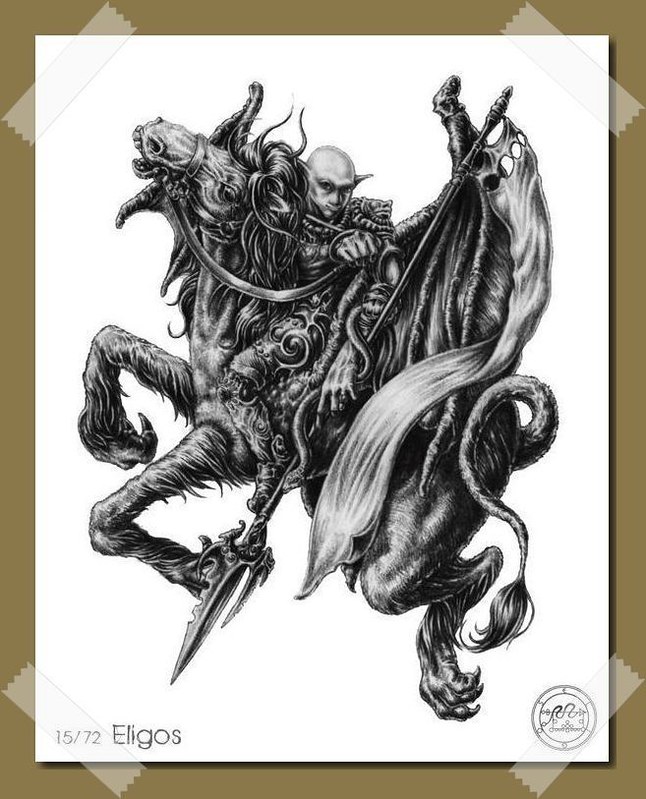 The Demon Abigor ( Eligos ) is a Demon who is a grand duke in Hell. Abigor appears as a handsome man on a horse, holding a standard or scepter. He knows all the secrets of war andsees the future. He teaches leaders how to win the loyalty of soldiers. In hell, he commands 60 Legions of Demons.

ELIGOS. – The Fifteenth Spirit in Order is Eligos, a Great Duke, and appeareth in the form of a goodly Knight, carrying a Lance, an Ensign, and a Serpent. He discovereth hidden things, and knoweth things to come; and ofWars, and how the Soldiers will or shall meet.
He causeth the Love of Lords and Great Persons. He governeth 60 Legions of Spirits. His Seal is this, etc.

“Eligos is a Duke who appears as a Knight, whom carries a lance and a serpent. Eligos may reveal hidden secrets i.e. within the self, outer as well. Eligos is also a divinatory spirit as well, who may reveal the coming of wars, unrest and battles. It is suggested the Eligos also causes Love of people as well. He governs 60 Legions of Spirits. “

Eligor, alias Abigor, is a great duke, and appeereth as a goodlie [handsome] knight, carrieng a lance, an ensigne, and a scepter: he answereth fullie of things hidden, and of warres, and how souldiers should meete: he knoweth things to come, and procureth the favour of lords and knights, governing sixtie legions of divels.

Abigor presents himself as a horseman carrying a lance, a standard, or a scepter. He commands sixty legions and is a grand duke of hell. He knows of the secrets of warfare, of the future, and can instruct leaders of the ways to earn their soldiers’ respect.