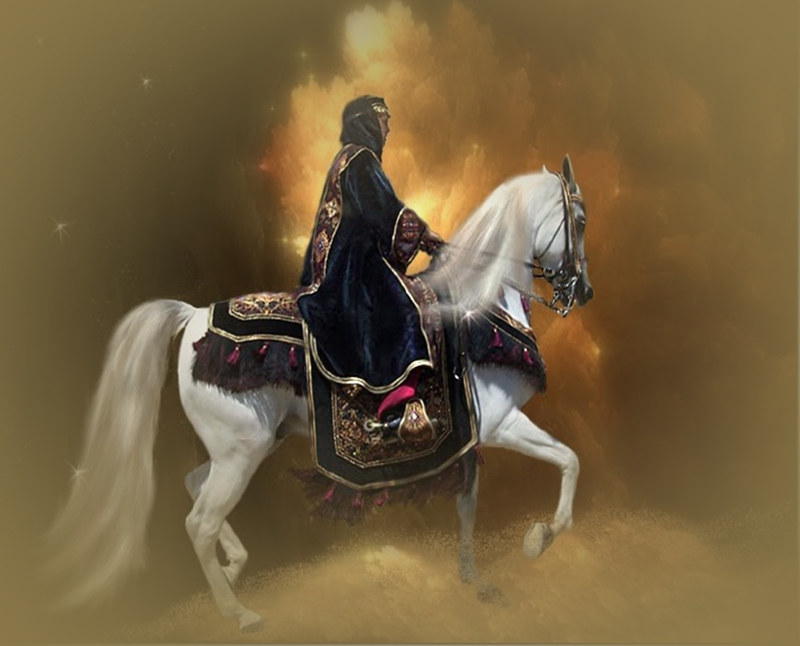 The Enchanted Horse is a Tale in The Thousand and One Nights (nights 357–371).

The inventor, aware of the prince’s hatred for him, taught the prince how to mount the horse, and how to let it fly—but he didn’t tell him how to get the horse down again. The young man ascended to the heavens and then realized that he did not know how to get down. After thinking about it for some time and calling upon Allah, he discovered the peg to let the horse down.

The prince came to a city where he found a beautiful princess. After many adventures he finally married her and returned home. His father, the king, then destroyed the magic horse.

Bucephalus (ox-headed) In Greek history and legend, the horse of Alexander the Great. Plutarch, in his Parallel Lives, tells the legend of how the horse…

Sam Hart of Woburn : In American folklore of New England, a horseman who once entered into a race with the devil. The devil appeared…

Dadhyanch (Dadhica, Dadhicha) In Hindu mythology, a sage who was taught certain sciences by Indra but was not allowed to pass on his knowledge to…

Dagr (day) In Norse mythology, the day, son of Nott (night) and Delling (dayspring). Dagr’s horse is Skinfaxi. Dagr and Nott had a horse and…

Sinon (plunderer) In Greek mythology, a young Greek soldier, a relative of Odysseus, who pretended to desert to Troy and convinced the Trojans to bring…