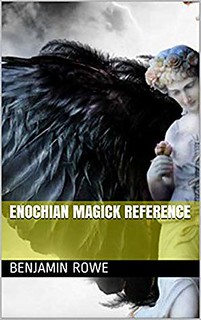 Benjamin Rowe (1952 – 2002) was an American Kaballist and ceremonial magician who published numerous articles on the Kabbalah and the magical system communicated to Dr. John Dee by angels known as Enochian magic. He incorporated Golden Dawn components into his version of the system and drew from the ritual structure laid out by Frater Achad. He was one of the few Enochian magicians who did ritual work and published his findings. He was active on the Internet under his own name and under the alias of Josh Norton. The Enochian Magick Reference describes a history of Enochian magic derived from occult methods that Elizabethan scholar John Dee and seer Edward Kelly claimed were revealed from the spirits from 1851 and 1885.
The devices revealed to them for occult use are described.

A history of how others used, developed and changed their system follows. These include

Then follows a discussion of the Enochian magic’s relationship to Necronomicon, the book of Enoch, the Apocalypse.

The book is short and is intended as a reference.

The Books of Enoch: A Complete Volume – Joseph B. Lumpkin