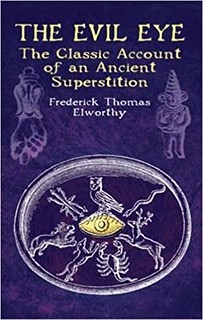 In Italian, it’s referred to as “malocchio.” In Spanish, it’s “el ojo.” And in Farsi, it’s “bla band.” In many cultures, primitive or sophisticated, the “evil eye” is considered to be a gaze that can harm or bewitch. This classic text on the subject, first published more than a century ago, recounts the many afflictions said to result from that stare, from the days of the ancient Egyptians, Greeks, and Romans, up to the late nineteenth century.

A classic in its field, Frederick Elworthy’s thorough study of an age-old notion focuses on superstition and folklore surrounding the use of gestures, amulets, incantations, and other protective behavior used to ward off the power of the “evil eye.” Enhanced with nearly 200 illustrations of evil-preventing charms from the author’s personal collection, this in-depth study will appeal to students and scholars of folklore and to anyone enticed by tales of the supernatural.

Evil Eye : The causing of illness, misfortune, calamity and death by the looks of strangers and by envious looks, amulets and incantations (see charms)…

In this classic book on UFOs, bestselling author Colin Wilson, a renowned authority on the paranormal, examines the evidence and develops a definitive theory of…

The Devil, Satan, Lucifer, Mephistopheles – throughout history the Prince of Darkness, the Western world’s most powerful symbol of evil, has taken many names and…

Iron is in folklore, one of the best charms against witches, sorcerers, Demons and other evil spirits. In Europe, folklore holds that witches cannot pass…