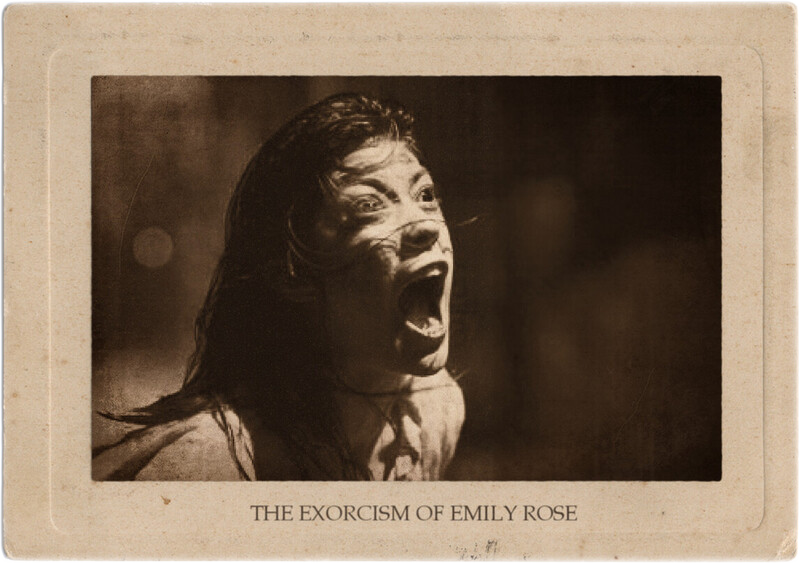 The Exorcism of Emily Rose, (2005) Film about a Demonic Possession and Exorcism, based on the true story of a German girl Anneliese Michel. The film was directed by Scott Derrickson and stars Jennifer Carpenter as Emily Rose and Tom Wilkinson as Father Moore, a Catholic priest.

Rose dies after Moore performs an exorcism on her, and Moore is charged with negligent homicide. Prosecutor Ethan Thomas (Campbell Scott) bases his case on the argument that Rose’s affliction had a medical explanation and Moore killed the girl by preventing her from taking her necessary medication. The defense counsel, Erin Bruner (Laura Linney), claims that Rose’s condition and death were due to supernatural causes. The trial becomes a stage for the debate of religion, philosophy, and supernatural beliefs. The principals suffer events of an apparent supernatural nature during the course of their arguments.

Whether or not Rose actually suffered from Demonic possession is never declared in the film, but is left up to the viewer.

On March 30, 1978, the trial began in the district court of Aschaffenburg Germany, of Josef and Anna Michel and Father Arnold Renz and Father…

Exclusively devoted to demonic possession and exorcism in early modern England, this book offers modernized versions of the most significant texts on nine cases of…

Stories are embedded in the world around us; in metal, in brick, in concrete, and in wood. In the very earth beneath our feet. Our…