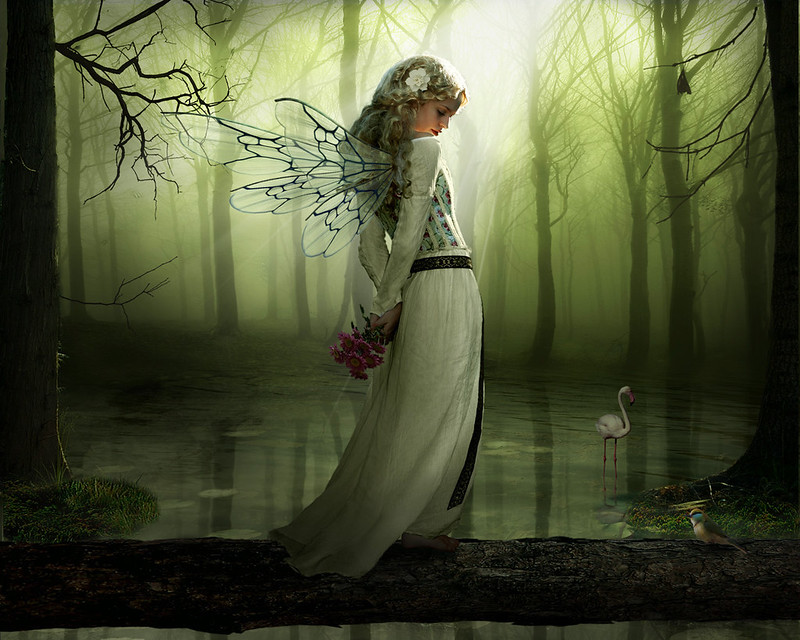 The Green Fairy is the Absinthe Fairy. Absinthe may refer to two things: absinthe names the herb Artemisia absinthium, more commonly known in English as wormwood. Absinthe also names the potent, mysterious, and controversial alcoholic beverage distilled from the leaves of this herb.

The term Green Fairy may refer to three things:

• The Green Fairy is the presiding spirit of absinthe, its matron goddess.

• The Green Fairy is also a nickname for absinthe (the drink) itself.

• The Green Fairy refers to a specific experience involving absinthe.

Some absinthe aficionados describe a point when, having imbibed a sufficient quantity of absinthe, a unique clarity of vision is achieved, leading to the heightened possibility of psychic and artistic inspiration. This experience is described as “meeting the Green Fairy,” which may or may not be intended literally.

The Green Fairy’s origins are ambiguous: She may have emerged from visions inspired by drinking absinthe or she may have emerged as a literary metaphor for the absinthe experience and for the beverage’s unique and lovely green colour. Regardless, even if once originally a metaphor, the Green Fairy has stepped out of the bottle and off the pages of poets: she is alive, well, and thriving in the twenty-first century.

Many Flower Fairies prefer to avoid people; the Green Fairy’s favoured haunts include crowded cafés, bars, dance halls, and night clubs. She chooses not to stay in the garden amid living wormwood plants; rather, she is a goddess of magic potions, romance, and illusions. The Green Fairy is a beautiful enchantress who rules dreams, visions, and psychoactive experiences. She inspires, heals, and protects but is also potentially dangerous. In Czech, she is called Zelena Muza: the “Green Muse.”

Wormwood, the plant also known as absinthe, is a herb with a reputation. Herbal concoctions have been brewed from wormwood for millennia:

• Wormwood’s healing properties are cited in the Egyptian Ebers Papyrus, dating from circa 1550 BCE.

• In classical Greece, wormwood leaves were infused in wine to create medicinal potions; Hippocrates recorded its virtues, as did Pythagoras.

Wormwood has formidable magical properties: it allegedly enables one to communicate with the dead; potions were concocted for such purposes. Wormwood is used to protect against malevolent magic. It may be a witch’s tool (for good or ill) or conversely guard against witchcraft.

In the Middle Ages, an English ale was brewed with wormwood. However the modern beverage known as absinthe did not exist until the very late eighteenth century. The Green Fairy did not emerge until that time either—or at least not in her modern form. Absinthe in its modern form was invented in either 1792 or 1797 by Swiss country doctor, Pierre Ordinaire. Originally marketed as a panacea, a health tonic, absinthe eventually became popular among the Paris demi-monde, the bohemian community of artists, poets, and free thinkers. (In Moulin Rouge, director Baz Luhrmann’s 2001 cinematic tribute to this era, the Green Fairy is incarnated by Australian actress, Kylie Minogue.) Absinthe spread through Europe’s cities and then to the Western Hemisphere, especially New Orleans.

Absinthe developed a reputation as a magical, enchanted potion. It retained wormwood’s associations with witchcraft: posters advertising absinthe frequently feature black cats, seductive women, and the ever-present Green Fairy. (These associations were conscious: a 1915 poster, entitled Death of the Green Fairy, protesting prohibition of absinthe depicts the Green Fairy being burned at the stake like a witch.)

Absinthe also developed a dangerous reputation. Because of the chemical constituents inherent in wormwood, absinthe potentially has narcotic and psychoactive effects. In addition, the marketed, distilled beverage possessed extremely high alcohol content: it was bottled between 120 and 160 proof (although many drink it heavily diluted with water). It is now generally acknowledged that absinthe’s dangers derived largely from this unusually high alcohol content. In addition, at the height of its popularity, cheap, inferior bootleg absinthes flooded the market. These often incorporated toxic adulterants leading to health hazards like heavy metal poisoning.

Among the many creative geniuses associated with absinthe are authors Oscar Wilde, Mary Shelley, Edgar Allan Poe, Ernest Hemingway, and Alfred Jarry; poets Charles Baudelaire, Pablo Neruda, Paul Verlaine, and Arthur Rimbaud; and painters Toulouse-Lautrec, Vincent Van Gogh, Pablo Picasso, and Paul Gaugin. The Green Fairy developed a reputation as a muse who provided creative inspiration and who could stimulate the talented to their utmost potential.

Because absinthe was among the first beverages marketed toward women and because of its powerful associations with artists, free thinkers, and free lovers, conservative elements of society despised absinthe, associating it with society’s degeneration. Calls to ban absinthe were at the vanguard of the Prohibition movement. Absinthe was banned in Switzerland in 1907; in the United States in 1912; and in France in 1915.

The twenty-first century has brought the Absinthe Renaissance and the public reemergence of the Green Fairy. Legal restrictions on absinthe have been lifted throughout the world. More varieties are now available than ever before, and it is considered as safe as any other alcoholic beverage when consumed in moderation.

The Green Fairy is often envisioned in the traditional guise of a flower Fairy: a tiny, sparkly, winged being, small enough to emerge from a bottle.

The Green Fairy, featured in absinthe advertising, posters, and on bottle labels, is usually depicted as a winged Fairy, approximately the size of a butterfly. She may be dressed in green or actually be green. Occasionally she is depicted as a human-sized green sylph. She is usually sexy, seductive, flirtatious, and very charming.

The Green Fairy may be venerated together with Artemis, the goddess with dominion over the Artemisia family of plants, which includes wormwood.

L’Heure Verte, or the Green Hour, technically the after-work cocktail hour, roughly five in the afternoon, but really any time that is suffused with absinthe

Montmartre; New Orleans; Prague; the shrine you build for her or any place powerfully associated with absinthe

Drinking absinthe is often heavily ritualized. All sorts of paraphernalia have evolved to serve these rituals, including special spoons, carafes, and glasses. These may rest on an altar when not in use. Decorate with vintage absinthe posters or paintings inspired by the Green Fairy.

Learn the basics of Witchcraft from a third-generation Witch raised in a family tradition. Positive, practical, and easy to use, Green Witchcraft brings together the…

Glaistig – The Green Lady The Glaistig may be a Highland Fairy or a once-mortal woman who has joined them. Her name literally means “water…

The West African trickster spirit Eshu Elegbara is Master of Roads. He determines whether someone’s path is clear or blocked with obstacles. Eshu determines how…