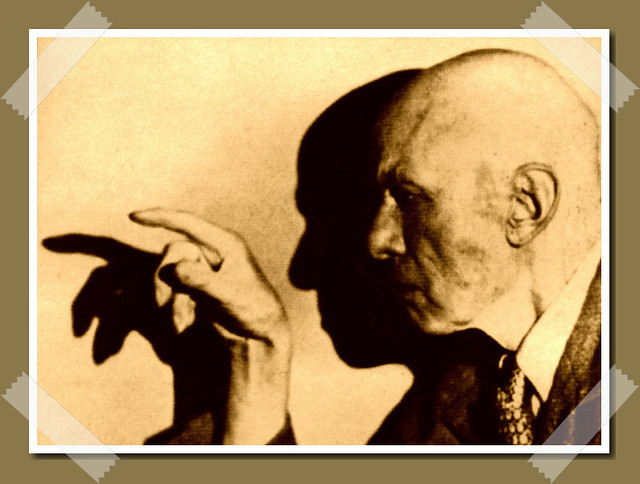 Aleister Crowley (1875-1947) The most controversial and perhaps least understood magician and occultist of his time, Aleister Crowley has been both vilified and idolized. He was a man of both low excesses and high brilliance. He considered himself to be the Reincarnation of other great occultists: Pope Alexander VI, renowned for his love of physical pleasures; Edward Kelly, the notorious assistant to occultist John Dee in Elizabethan England; Cagliostro; and occultist Eliphas Levi, who died on the day Crowley was born. Crowley also believed he had been Ankh-f-n-Khonsu, an Egyptian priest of the XXVIth dynasty.

Crowley was born in Warwickshire, England. His father was a brewer and a preacher of Plymouthism, the beliefs of a sect founded of the Plymouth Brethren in 1830 that considered itself the only true Christian order. As a child, Crowley participated in the preaching with his parents, then rebelled against it. His behavior inspired his mother to call him “the Beast” after the Antichrist. Later, he called her “a brainless bigot of the most narrow, logical and inhuman type.” His father died when he was 11.

As Crowley grew older, he became interested in the occult. He also discovered he was excited by descriptions of torture and blood, and he liked to fantasize about being degraded by a Scarlet Woman who was both wicked and independent.

He entered Trinity College at Cambridge, where he wrote poetry and pursued, on his own, his occult studies. He loved to climb rocks and mountains and attempted some of the highest peaks in the Himalayas. In 1898 he published his first book of poetry, Aceldama, A Place to Bury Strangers in. A Philosophical Poem. By a Gentleman of the University of Cambridge, 1898. In the preface, he described how God and Satan had fought for his soul: “God conquered — now I have only one doubt left — which of the twain was God?”

After reading Arthur Edward Waite's The Book of Black Magic and of Pacts, which hints of a secret brotherhood of adepts who dispense occult wisdom to certain initiates. Intrigued, Crowley wrote to Waite for more information and was referred to The Cloud upon the Sanctuary, by Carl von Eckartshausen, which tells of the Great White Brotherhood. Crowley determined he wanted to join this brotherhood and advance to the highest degree.

On November 18, 1898, Crowley joined the London chapter of the Hermetic Order of the Golden Dawn, which was the First or Outer Order of the Great White Brotherhood. He discovered he had a natural aptitude for Magic and rose quickly through the hierarchy. He began practicing yoga, in the course of which he discovered his earlier incarnations. He left Trinity College without earning a degree, took a flat in Chancery Lane, named himself Count Vladimir and pursued his occult studies on a full-time basis. He advanced through the First Order and sought entry into the Second Order of the Great White Brotherhood, a Rosicrucian order also called the Order of the Red Rose and the Golden Cross. Beyond this was the top order, the Silver Star or A:. A:. (Argentum Astrum), which had three grades: Master of the Temple, Magus and Ipissimus. The latter could be achieved only by crossing an unknown and uncharted Abyss.

Crowley was intensely competitive with S. L. Mac- Gregor Mathers, the chief of the Hermetic Order of the Golden Dawn and a ceremonial magician. Mathers taught Crowley Abra-Melin magic (see Abramelin the Mage) but had not attained any of three grades in the A:. A:.. The two quarreled, and Mathers supposedly dispatched an army of elementals to attack Crowley. Crowley also argued with other members of the Golden Dawn as well and as a result was expelled from the order. He pursued the attainment of Ipissimus on his own.

Crowley traveled widely. He studied Eastern mysticism, including Buddhism, Tantric Yoga and the I Ching. For a time he lived in Scotland, in an isolated setting near Loch Ness. In 1903 he married Rose Kelly, who bore him one child. Rose began to receive communications from the astral plane, and in 1904 she told Crowley that he was to receive an extremely important message. It came from Aiwass, a spirit and Crowley's Holy Guardian Angel, or True Self. Crowley also later identified Aiwass as a magical current or solar-phallic energy worshiped by the Sumerians as Shaitan, a “devil-god,” and by the Egyptians as Set. On three consecutive days in April 1904, from noon until 1 p.m., Aiwass reportedly manifested as a voice and dictated to Crowley The Book of the Law, the most significant work of his magical career. It contains the Law of Thelema: “Do what thou wilt shall be the whole of the law.” Though some have interpreted it to mean doing as one pleases, it actually means that one must do what one must and nothing else. Admirers of Crowley say the Law of Thelema distinguishes him as one of the greatest magicians of history.

Aiwass also heralded the coming of a new Aeon of Horus, the third great age of humanity. The three ages were characterized as Paganism/Christianity/Thelema, represented, respectively, by Isis/OSirIS/Horus. Crowley considered himself the prophet of the New Aeon.

From 1909 to 1913, Crowley published the secret rituals of the Golden Dawn in his periodical, The Equinox, which also served as a vehicle for his poetry. Mathers tried but failed to get an injunction to stop him. By 1912 Crowley had become involved with the Ordo Templi Orientis, a German occult order practicing magic. In 1909 Crowley explored levels of the astral plane with his assistant, poet Victor Neuberg, using Enochian magic. He believed he crossed the Abyss and united his consciousness with the universal consciousness, thus becoming Master of the Temple. He described the astral journeys in The Vision and the Voice, published first in The Equinox and posthumously in 1949.

Crowley kept with him a series of “scarlet women.” The best known of these was Leah Hirsig, the “Ape of Thoth,” who indulged with him in drinking, drugs and sexual magic and who could sometimes contact Aiwass. Crowley apparently made several attempts with various scarlet women to beget a “magical child,” none of which was successful. He later fictionalized these efforts in his novel, Moonchild, published in 1929.

From 1915 to 1919 Crowley lived in the United States. In 1920 he went to Sicily and founded the Abbey of The- lema, which he envisioned as a magical colony.

In 1921, when Crowley was 45, he and Hirsig conducted a ritual in which Crowley achieved Ipissimus and became, according to his cryptic description, a god (“As a God goes, I go”). He did not reveal attaining Ipissimus to anyone, only hinting at it in his privately published Magi- cal Record much later, in 1929. After the transformation, however, Hirsig found him intolerable. Crowley later dis- carded her and acquired a new scarlet woman, Dorothy Olsen.

In 1922 Crowley accepted an invitation to head the Ordo Templi Orientis. In 1923 the bad press that he routinely received led to his expulsion from Sicily, and he had to abandon his abbey. After some wandering through France (where he suffered from a heroin addiction), Tunisia and Germany, he returned to England.

In 1929 he married his second wife, Maria Ferrari de Miramar, in Leipzig.

In his later years he was plagued with poor health, drug addiction and financial trouble. He kept himself financially afloat by publishing nonfiction and fiction. In 1945 he moved to a boardinghouse in Hastings, where he lived the last two years of his life, a dissipated shadow of his former vigorous self. During these last years, he was introduced to Gerald B. Gardner by Arnold Crowther. According to Gardner, Crowley told him he had been initiated into the Craft as a young man. This claim is unlikely, as there is nothing in Crowley's published or unpublished writings referring to involvement in witchcraft. Crowley seemed disinterested in the Craft because of the authority of women; according to Patricia Crowther, he said he “refused to be bossed around by any damn woman.” Crowley died in a private hotel in Hastings in 1947. His remains were cremated and sent to his followers in the United States.

Crowley's other published books include The Diary of a Drug Fiend; Magick in Theory and Practice, still considered one of the best books on ceremonial magic; The Strategem, a collection of fiction stories; The Equinox of the Gods, which sets forth The Book of the Law as mankind's new religion; and The Book of Thoth, his interpretation of the Tarot Confessions originally was intended to be a six- volume autohagiography, but only the first two volumes were published. He argued with the publishing company, which was taken over by his friends and then went out of business. The remaining galleys and manuscripts — he had dictated the copy to Hirsig while under the influence of heroin — were lost or scattered about. They were collected and edited by John Symonds and Kenneth Grant and published in a single volume in 1969.

Crowley referred to himself in some of his writings as “the Master Therion” and “Frater Perdurabo.” He spelled magic as magick to “distinguish the science of the Magi from all its counterfeits.” Some modern occultists continue to follow suit. See Old George Pickingill.

Ordo Templi Orientis (OTO) Quasi-Mason magical order founded in Germany in 1901 and focused on sex magic as the key to Hermetic and Masonic secrets.…

This beautiful collection of meditations on the astrological signs and the paths of the Tree of Life was originally titled The Treasure House of Images.…