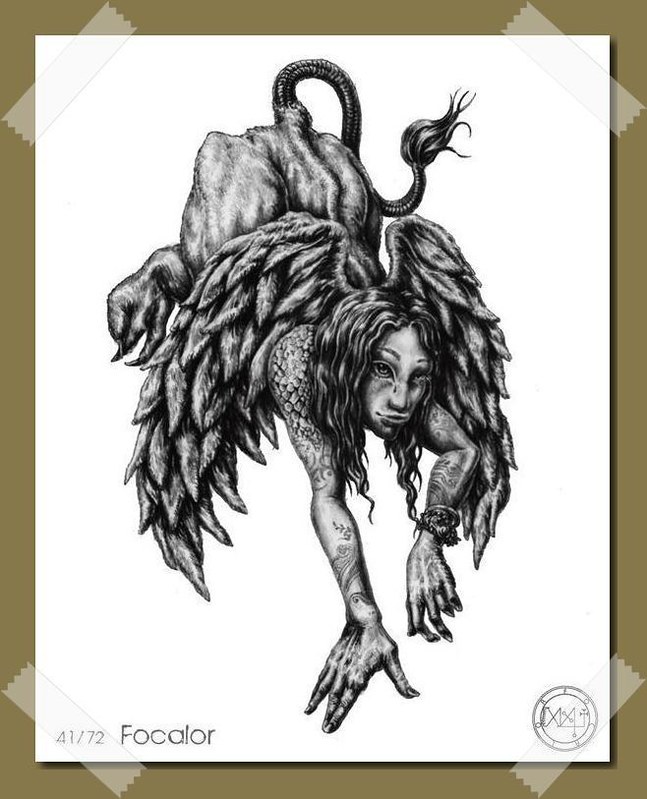 The Demon Focalor is a fallen Angel and the 41st of the 72 Spirits of Solomon. Prior to his fall, Focalor was a member of the angelic order of thrones. In Hell, he reigns as a duke with 31 Legions of Demons. He appears as a man with griffin wings. He has the power of the wind and the sea and drowns men and sinks warships.
If commanded, he will not harm anyone. Prior to his fall, he was in the order of thrones. After 1,000 years, he hopes to return to the seventh heaven.

FOCALOR. – The Forty-first Spirit is Focalor, or Forcalor, or Furcalor. He is a Mighty Duke and Strong. He appeareth in the Form of a Man with Gryphon’s Wings. His office is to slay Men, and to drown them in the Waters, and tooverthrow Ships of War, for he hath Power over both Winds and Seas; but he will not hurt any man or thing if he be commanded to the contrary by the Exorcist. He also hath hopes to return to the Seventh Throne after 1,000 years. He governeth 30 Legions of Spirits, and his Seal is this, etc.

“Focalor is a murdering spirit, who may also drown individuals in water and causes storms in the seas. If commanded, he will not harm any living being. He was too of the Seventh Throne and seeks to return there after 1,000 years. Focalor governs 30 Legions of spirits and is a powerful servitor to summon in dreaming (Subconscious – Water – Leviathan) sorcery. He too has power of the Air, being a Luciferic Angel as well. “

Focalor is a great duke comming foorth as a man, with wings like a griphen, he killeth men, and drowneth them in the waters, and overturneth ships of warre, commanding and ruling both winds and seas. And let the conjuror note, that if he bid him hurt no man, he willinglie consenteth thereto: he hopeth after 1000. yeares to returne to the seventh throne, but he is deceived, he hath three legions.